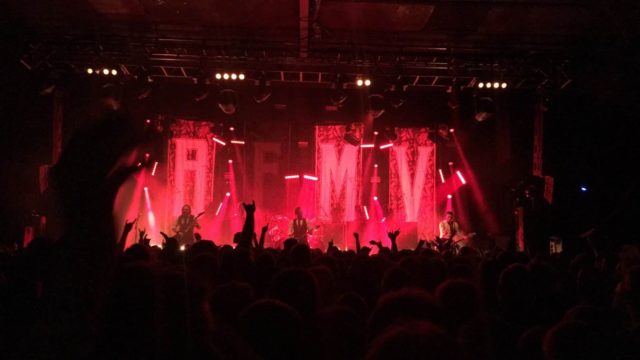 After over a decade of thrashing out metalcore albums ranging from incredible to downright flat, Bullet For My Valentine returned to their roots to perform their first LP “The Poison” in full in between regular “best of” sets.

They brought along fellow metal stalwarts from across the pond, Killswitch Engage (8). Killswitch’s setlist is an almost flawless exploration of the evolving sound of metalcore over the past decade.

Indeed, it’s packed full of so many hits that they can confidently begin with “My Curse,” arguably the bands biggest song. During the set the band seem to be having the time of their life, with Adam Dutkiewicz on lead guitar looking particularly joyous, dancing away as he finger taps his way through complex solos.

Killswitch go from strength to strength throughout their half hour set with bangers like Hate by Design and Fixation on the Darkness leading up till the final, triumphant run of “The End of Heartache,” “Strength of the Mind” and “In Due Time” that cause moshpits to erupt and the crowd to sing their hearts out.

After Killswitch Engage leave the stage, there’s a half-hour wait until Bullet take to it. During this time, there’s several enthusiastic chants demanding for “Bullet!” to appear. It’s clear that this packed out crowd of twenty-somethings is on the verge of hysteria waiting for what is a special moment for a lot of them.

After the house lights dim and the last vestiges of Motorhead’s “Ace of Spades” fade, Bullet For My Valentine (7.5) emerge onto stage to the sound of The Poison’s first track, “Intro.” A few seconds later, Matt Tuck unleashes a bellow and the band smash straight into “Her Voice Resides.”

It’s an almost note-for-note reproduction of the now classic album, and the joy of the faces of the band make it all the more enjoyable. They blast straight through the whole album front to back, taking occasional breaks to introduce particularly special songs such as “Tears Don’t Fall” and “All These Things I Hate,” which gets a rousing rendition from the crowd.

It’s not only the acoustic moments that get the audience singing along though, almost every tune on the record gets its lyrics screamed back at the band, a reminder of just what this album means to a lot of the crowd.

Even the heaviest moments of the album, including “Hit The Floor” and “Hand of Blood” are performed flawlessly, with great guitar noodleing from Michael Paget, who has a larger role tonight than in many Bullet sets due to the reliance from lead vocalist Matt Tuck on Paget’s larger range of growled vocals on Bullet’s first album.

That’s not to say Tuck gets an easy ride, he keeps up a dynamic range of sung and shouted vocals himself throughout the night, along with performing admirably on rhythm guitar.

That said, Matt himself says that performing the Poison has been “the best thing the band has done for ages” and newest song “Don’t Need You” is at least a step in the right (heavier) direction for the group and many fans leave the Academy tonight with a rejuvenated interest in Bullet for 2017.