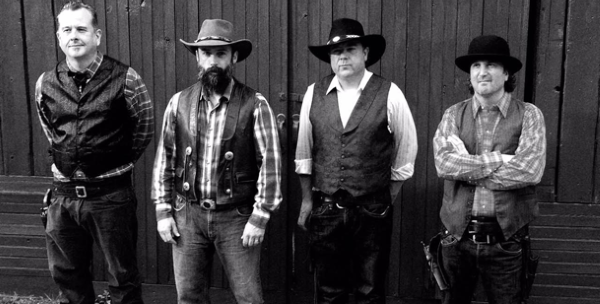 Clutch are a band who are decidedly old school – as per the customs of the 1990s US stoner rock scene that facilitated their rise to prominence, the band play modern rock’n’roll with a retro, ‘70s feel that focuses on groove and the power of a simple, repetitive riff. It’s a sound that is stripped back to the bare essentials of what makes a rock band – guitar, drums, bass, vocals, and nothing else, to such an extent that the welcome addition of opening act Lionize’s Chris Brooks playing keyboards on 10001110101 and Escape From The Prison Planet feels almost frivolous.

As such, it shouldn’t be surprising that their live show is decidedly no frills to an almost extreme degree. The band take to a stage backed by a monolithic backdrop that showcases the artwork from 2015’s Psychic Warfare. There’s a substantial wall of guitar and bass cabs (another welcome throwback to the 1970s) flanking Jean-Paul Gaster’s drum kit, the usual assortment of coloured lights, and absolutely nothing else. Perhaps as an extension of this ideology, or a sign of an aging band with twenty-five years of experience under their belts, they aren’t the most energetic performers in the world either, with guitarist Tim Sult and bassist Dan Maines staying largely statue-like and pinned to their respective spots, despite occasional bursts of movement from the energetic Neil Fallon.

With so little to entertain the crowd visually in such a large venue, a lesser band would struggle to keep a crowd engaged for almost two hours, and indeed, Clutch definitely don’t hit home 100% of the time; the band certainly aren’t the tightest we’ve ever seen here at Rock Sins, and they seem to take a few songs to really settle into the groove of the show, but when they find it, Clutch are a formidable force in rock’n’roll, a band that shows their twenty-five years together in the best possible way. Grooved-out riffs hit home, the sound pumping from the speakers is fat, and Fallon’s voice is unbelievably powerful. The setlist comprises of a varied mix that spans eight separate releases across the full duration of the band’s career, seamlessly integrated through the inclusion of a number of bluesy improvised jams, so there’s something provided for any kind of fan of the band.

Admittedly, despite this, there’s not a lot of variation across the duration of the set, but that’s not ‘strictly necessary’ for a band like Clutch to put on a good show – in fact, Clutch come across tonight as a band who only deal in the ‘strictly necessary’, but the show they’re able to put on nevertheless demonstrates that they’re one of the rare few with the panache and staying power to make that work.