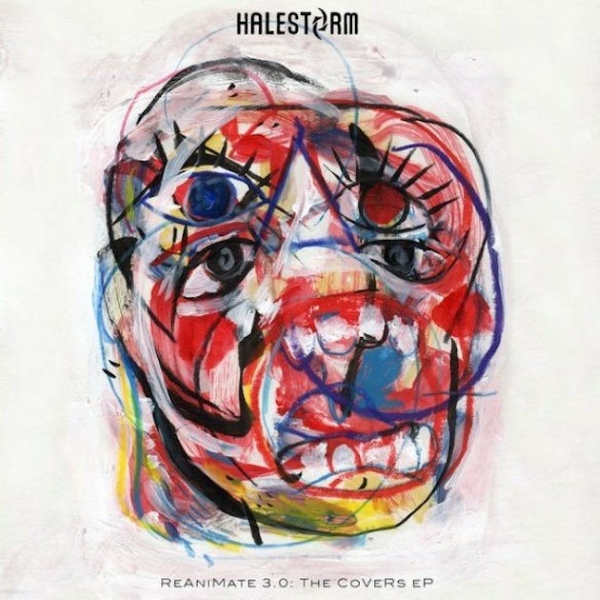 I have said it before but it bears repeating, In my opinion, Halestorm are the best pure rock band in the business right now. There are no false pretences, no gimmicks, just straight up rock & roll and sometimes that is all you need, especially when it is this good.

It’s no secret that Halestorm have spent the last 7 years (since their major label debut in 2010) releasing music of progressively better quality, leading up to and including 2015’s Into the Wild Life. One of the most curious parts of Halestorm’s recorded output has always been the ReAnimate series of covers e.p’s the band has put out as stop gaps between full-length releases. As there are now 3 full length’s we now have hit volume 3 of the ReAnimate series, and this is arguably the best in terms of the songs they have chosen.

I think the track that will receive the most attention, will likely be the one that most people outside of the community will be interested in, and that is the cover of Twenty One Pilots’ monster hit Heathens, which was a smash hit summer single thanks in no large part to it’s inclusion on the Suicide Squad soundtrack and it’s constant rotation on Radio One, It stands alongside their covers of Get Lucky by Daft Punk, and Bad Romance by Lady Gaga, as a song that was perfectly fine on it’s own and hasn’t really been changed or altered by the cover, and is pretty much the same as the original, which is a shame, as its smacks as being a bit of a wasted opportunity.

The opening track, Still of the Night, by Whitesnake, however, takes the original and gives it a much-needed shot of adrenaline. Don’t get me wrong the original is a classic, but there is just something about taking that song and adding Lzzy’s voice on top, the two just really seem to compliment each other and it is right in her wheelhouse, and both she and the band completely knock it out of the park.

Elsewhere Lzzy pays homage to a pair of ladies in rock by covering Damn I wish I was your lover by Sophie B Hawkins and I Hate myself for loving you by Joan Jett, both of which slow the pace down ever so slightly and give good nods to the original. In particular the cover of Damn I Wish I was your lover showcases the vulnerable side to Lzzy that we have seen on previous releases. It gives you a little bit of a breather after the frantic opener, whereas the cover of I hate myself for Loving you is essentially a carbon copy of the original. In this case it isn’t a bad thing, even with the comments I made about the Heathens cover, that song needed an overall reworking, whereas what is done here serves the original well and gives it the acknowledgement and respect it deserves.

The two boldest choices come at the end of the e.p, firstly with a cover of Fell on Black days by Soundgarden. Anyone that knows me, knows that I really don’t like Soundgarden, but I will never deny that Chris Cornell has one hell of a voice and everyone should take that into consideration when covering any of his songs. Now Lzzy Hale has a damn fine voice herself, but it seems like they took a song that was originally really dark and somehow managed to make it lighter and more accessible which doesn’t come across in translation. It’s a perfectly good song and version if you listen to it on its own merit, but it pales in comparison to the starkness of the original.

The e.p ends with what I’m sure will be the most controversial track on here, a cover of Ride the Lightning by Metallica, again a classic song that was a very bold choice. Halestorm are not a thrash band, hell they aren’t even a metal band, but they aren’t afraid to get heavy when they need to, and this is a really well-crafted cover, it doesn’t try to be the original but it also isn’t so wildly different that you have no idea what song it is. It takes the song and moulds it to the band’s sensibilities, rounding off the e.p nicely. The only reason I say it’s controversial, is because Metallica are somewhat off a sacred cow in our scene and I can see this being the cover that a lot of the elitist’s take umbrage with.

All in all this is another fine stop gap release from Halestorm that shows some versatility in its choices and goes one step further to paving the way for their legacy down the line. Now stop messing about and get started on album number 4, please.

Halestorm’s ReAnimate 3.0 is out now on Atlantic Records.