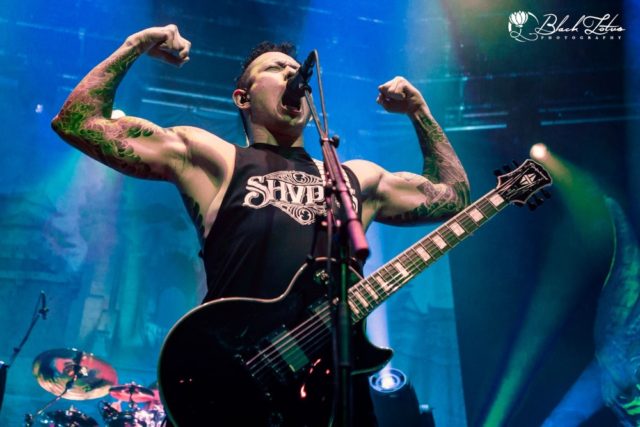 Following last years’ “small towns” tour that saw Trivium visit the lesser played sights of the UK such as Ipswich and Lincoln, February 2017 saw their return to more familiar locations in Britain. Deciding to finish off their run for Silence In The Snow in the land that broke them to the world seemed a very smart decision. Several members of Team Rock Sins descended on a sold out Camden Town Roundhouse in London for the penultimate show of the tour, and excitement was definitely in the air (along with stout and chicken kebabs).

Before Trivium, there was the non-small matter of UK tech metal masters SikTh (8), who did a wonderful job laying waste to the Roundhouse. Co-frontmen Mikee Goodman and Joe Rosser were both in sparkling (and in Mikee’s case, spiky) form which made for an excellent 40 minute set. Songs like Pussyfoot and Skies of Millennium Night got the willing audience moving while the closing Bland Street Boom was hollered back at the band with huge enthusiasm.

Will you come back and see us if we play again came the question from the stage. The responding Roar suggested that a good portion of those in attendance would do just that. If you have a chance to see SikTh at ArcTanGent or anywhere else, make sure you do. They’ve probably never been tighter.

As The End of Everything hit the PA system after a mighty singalong to Run To The Hills, it was the start of an almighty setlist from Trivium (9). Having not seen the obligatory “Rain” follow The End Of Everything for some years, the joyful hysteria of the crowd was to be expected (with our own James Halstead being the first crowd surfer of the night after approximately 30 seconds). Tonight’s set spanned the full Trivium discography with barely a let up for the entire 90 minutes. Welcome surprises like a brutal Dusk Dismantled and a face melting Entrance Of The Conflagration merged seamlessly with old favourites like Dying In Your Arms and Down From The Sky.

Much has been made over both another new drummer for Trivium and Matt Heafy’s recent comments on the situation, but there were no issues tonight. Despite being a handful of shows into his Trivium career, Alex Bent offered a masterful display of his new band’s material, being particularly impressive on the likes of Rain, Forsake Not The Dream and Pillar Of Serpents. As for Trivium’s three regular muskateers, it was business as usual. Corey shredded, Paolo pummelled his bass like it was part of the Trump administration, and Matt’s clean vocals have never sounded better in twelve years of visiting the UK.

Whilst the entire show was enormously enjoyable, the final flurry saw things ratchet up another level with Pillar Of Serpents and A Gunshot To The Head Of Trepidation (cue James Halstead crowdsurf #2) batter the assembled masses into submission. Until The World Goes Cold sounds about 1,000 times heavier in the flesh, before the obligatory Pull Harder finished off the main set. The band were off stage for such a short period of time it is dubious to even call it an encore, but nevertheless Capsizing The Sea hit the PA and then The Roundhouse went off to a thunderous In Waves (see the video below):

Another night in London that can only be classed as a Trivium triumph. Nights like this show exactly why they were the band expected to ascend through the glass ceiling to join Metallica and co at metal’s top table a decade ago. As Matt Heafy himself said in our recent exclusive interview with him (read that here), the band are still young and have plenty of time to get there. It would be for the good of metal as a whole if they can succeed at the highest level. We back them all the way.

Stay tuned for our full photogallery of the night’s action which will be on sale in the coming days.