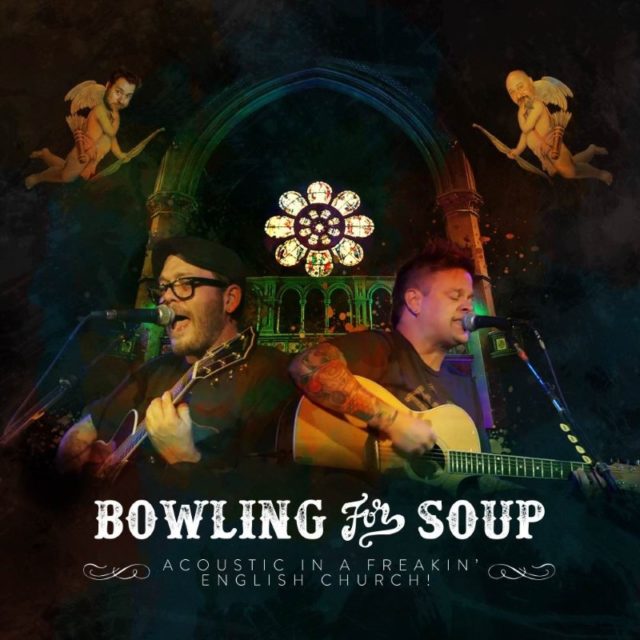 I have seen Bowling For Soup live several times over the years. In fact, they are one of my favourite live bands to see. But I never imagined in my wildest dreams I would see them do an acoustic show in a church. Saying that though, this is a bit of a rare treat, so I was definitely curious to see it.

Filmed back in 2013 at London’s Union Chapel, the Acoustic In A Freakin’ English Church DVD features Erik Chandler and Jaret Reddick running through a set of Bowling For Soup classics. As you would expect there is a hefty dose of banter, so this is part stand-up and part live show. It feels familiar to MTV Unplugged, back in the good days when there was music on MTV. Somehow it manages to retain all the hallmarks of a full Bowling For Soup show as well.

I know that some fans have grown accustomed to these special shows. They have road tested this type of material and special tours before. But it does take a moment to adjust when hearing these songs in a more stripped down setting. Some of the songs benefit rather well from the acoustic treatment. ‘Emily’ ‘Punk Rock 101’ and even ‘1985’ all take on new leases of life. ‘The Bitch Song’ is also surprisingly well suited to a more mellow approach. It actually sounds a little bit sweeter, if that’s possible.

I will admit to being a little more unfamiliar with the songs from the ‘Lunch Drunk Love’ album and that would be my only negative. I feel like you should hear songs for the first time the way they were intended. But it’s a small gripe in what is an otherwise entertaining set, and even then it’s a preference thing.

I’ll be the first to admit that this could have been a complete disaster. But I think it’s a testament to how far Bowling For Soup has come over the years. Nobody would have expected this from them once upon a time, but they have taken their sound and added another string to their bow. I would be into the idea of a full-on acoustic album in the future, but whether that happens remains to be seen. As a one off special treat for the fans though it works incredibly well. Even the idea of staging it in a church was brilliant. The Union Chapel is a gorgeous venue that sets the mood perfectly and really allows the performance to have a special atmosphere to it.

If you are a die-hard fan or even have just a passing interest in Bowling For Soup I would highly recommend this. It’s different, but still, highlights what make Bowling for Soup such a fun and brilliant live band.

Acoustic In A Freakin’ English Church is out now via Brando / Que-So Records.