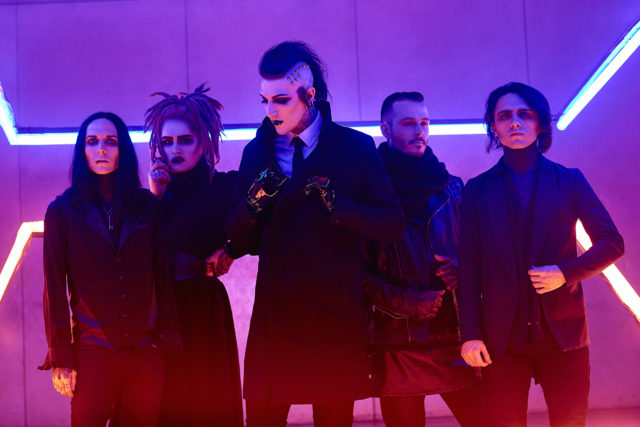 2017 has already seen dark and uncertain times across the globe. While charismatic frontman Chris Motionless laughs off any intention of running for US president, Motionless in White’s year continues on the road across the States plus a trip to the European festival circuit, with their first appearance on Download Festival’s main stage in June. Meanwhile, their fourth opus ‘Graveyard Shift’, due 5th May, makes a defiant statement that they’re still working their cadavers off for their fans and loving every minute.

“I like to believe we’ve found our trademark in our music,” Chris tells us, “I’m most proud of this new record because it’s the defining sound of our band that we’ve perfected from ‘Reincarnate’.”

Pitting their tireless work ethic against the odds, ‘Graveyard Shift’ tells their story as a band that rarely takes time away from life on the road. From their most personal track ‘570’ to the dedication of lead single ‘Loud (Fuck It)’ to the fans who attended his TEI workshops on Warped Tour last year, Chris Motionless is confident that this album is as relatable as they come.

“I was afraid ‘Loud’ would be a little too specific to the fans from the workshops, but I tried to make sure there were moments everyone could join in when it opens up. The lyrics are definitely more forward than most of ‘Graveyard Shift’ altogether, but sometimes that just how I do it. Having something objective to focus on like those workshops gives me a lot more inspiration than an open subject.”

Despite a sneaky reference to the Joker in this track, there’s not many things Chris has in common with Batman’s nemesis but he welcomes the comparison.

“I never really saw myself as the Joker, but I did a photoshoot last year dressed up as him and the second the makeup went on, it felt totally natural to me. I loved being able to put on his animated, mischievous personality. He’s devious, sarcastic and borderline evil with a bit of heart – at least that’s how I interpret the Joker anyway!”

Speaking of menacing characters, ’Necessary Evil’ features a striking guest appearance from inimitable Korn frontman Jonathan Davis, a partnership that arrives not a moment too soon in Chris Motionless’s career.

“Jonathan Davis is a pro! I wanted him to do loads more than he did on this track but he’s not a person that does guest slots lightly, he knew what we wanted and he fucking nailed it. He’s such a polarising vocalist but you know it’s him the moment you hear it, the fifteen-year-old me is still giggling over it!”

While ‘Graveyard Shift’ expertly honours goth favourites Bauhaus and Marilyn Manson with subtle atmospherics throughout, do Motionless in White feel the burden of carrying the torch for the goth scene?

“That’s probably one of the boldest statements about this band I’ve ever heard in my life! It makes me feel good to hear we’re compared to these insanely polarising and iconic bands. Even when people say we’re ripping them off, I’d much rather be accused of ripping off someone that I love.”

Believe it or not, Chris Motionless freely admits he is the antithesis of his on-stage persona throughout the creative process.

“I don’t have a lot of confidence as a vocalist of any kind when we record an album, I firmly believe I’m a guitar player rather than a singer. I spend a lot of time working on the music with Ricky and what we’re doing instrumentally, so I always push my vocals right to the very end. Then, I run out of time and don’t focus on them as much as I should – vocals are arguably the most important aspect.”

Having signed to their dream record label Roadrunner in July last year, it’s evident Motionless in White are finally comfortable behind the speakers – with a newfound freedom to express their individual characters, ‘Graveyard Shift’ was time to show their fans that they mean business.

“With Graveyard Shift, I told myself, ‘Look, if you’re gonna fucking take this seriously now you’re three records in, you should probably focus on the vocals at least half as much as you do with the music.’ There are some moments on this record unlike the other three where I can’t believe that’s my voice!”

It should come as no surprise to long-term fans that Graveyard Shift is as much a visual work of art as an aural one. Its album cover features a child with pitch black eyes – remind you of anyone?

“The image struck me straight away,” Chris elaborates, “I felt like I was looking into this child’s eyes and saw myself, I had a deeper relationship with the picture than just a kid on the cover. I was a little upset to see that some fans weren’t imaginative enough to see more than a photo, but I stand by it because hopefully people will see what I had in mind.”

2017 has already proved somewhat eventful for the Scranton outfit – keyboardist Josh Balz bowed out of the lineup in January and, while Balz still appears on the album, Motionless have no intention of letting this speed bump halt their machine.

“Whatever happens now, regardless of the missing member, we’re really comfortable and we get along on lots of different levels outside of music. It’s not a huge hit that we have to fill the keyboard spot now, we’ll move on from this but we wish Josh the best.”

Despite the ever-changing picture of Motionless in White, one face remains a fan favourite – bassist Devin Sola. Coming out of his creative shell under the Motionless umbrella, Chris muses on his friend and cohort’s evolution both on- and off-stage.

“Devin feels more comfortable now,” Chris muses. “He’s a very unique personality and that’s why he’s one of my favourite people in the world. He’s a smart guy who likes to push people’s buttons, a lot of us in the band do. People take everything he does very literally, some things he says may not agree with some fans but he’s not afraid to do or say what he wants – as a person who supports that way of life, I have nothing but enthusiasm for him!”

Recalling the band’s lineup changes, Chris returns to a moment shared with Devin that would transform the band’s future.

“Back when we were considering hiring Devin as a bassist, he came out on tour with us for a couple of days to get a feel of our performances. We were playing in Richmond, Virginia and I looked out into the crowd and I saw Devin in the pit going insane for our band. I knew then and there that this motherfucker’s in the band starting right now, I don’t even care if he sucks at bass or he’s an asshole. Luckily he was a great and super talented guy so it all worked out!”

With lineup changes in mind, Chris discusses their plans for future setlists which may surprise fans of 2012 album ‘Infamous’.

“I was going to text the band yesterday saying I really want to play ‘Burned at Both Ends’, we’ve never played it live before and I’m not sure why. It’s another one like ‘570’ that’s so personal to me and everyone in the band loves it, we’re just saving it for something special. Maybe later this year!”

2017 is a year of tentative speculation, but it’s safe to say Motionless in White are more than happy to work the ‘Graveyard Shift’.

‘Graveyard Shift’ will be released on 5th May via Roadrunner Records and Motionless in White hit the Download Festival main stage on Friday 9th June – pick up your Download tickets here.