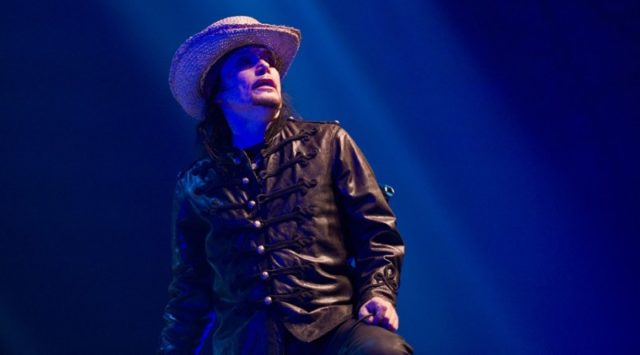 In terms of British music careers, it’s difficult to think of a performer from the last few decades with quite as much crossover appeal as Adam Ant. Whether it be as leader of Adam and the Ants in the late 70s and early 80s, or as a solo artist in his own right, the man has quite simply become a cultural icon over the course of his many years in the music industry. Now touring the country under the banner of “ANTHEMS – The Singles” and delivering sets of his most popular work with some rare cuts mixed in, we travelled to Manchester’s Bridgewater Hall to see just how well the dandy highwayman himself can deliver in 2017.

First up though are LA punks Glam Skanks (9), a four-piece female rock outfit who, on paper, seem tailor-made for these kinds of classic-era shows. From the first notes of anthemic opener GLAM, it’s obvious that these ladies are a truly brilliant act too – delivering a set that seems one part The Runaways, one part T-Rex, one part Rock Of Ages, and altogether utterly fantastic. Vocalist Ali Cat in particular seems to possess an almost otherworldly level of talent, effortlessly switching between up-tempo rock belters like Teenage Drag Queen and the sultry blues of slower numbers like Karma with zero apparent difficulty. Her fellow bandmates (guitarist Veronica Volume, bassist Millie and drummer Cassie) are just as brilliant tonight as well, cranking out rock anthems that even some of classic rock’s best probably wish they could have written. Bad Bitch has the swagger of classic era Aerosmith all over, whilst Wild Soul sounds so much like a Rocky Horror Show cut, it’s remarkable. There’s even time for some gloriously tongue-in-cheek humour too, with Fuck Off – a track which sees Ali and the rest of the band engaging in the sweariest bit of audience interaction this side of a Steel Panther show, chanting a chorus that’s pretty much exactly what you’d expect, only ten times more cheerful-sounding. Finishing off with the anthemic Glitter City is final proof of just how hard Glam Skanks can rock, and leaves virtually the whole room applauding wildly. 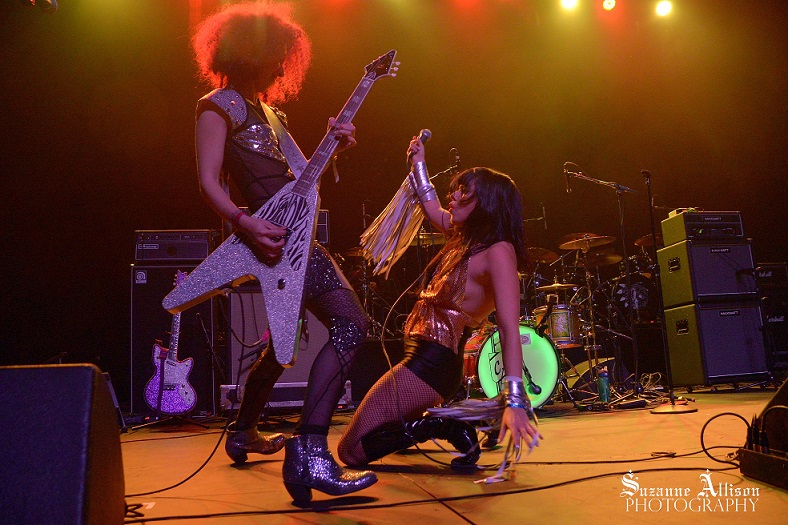 If that was just the appetizer, then tonight’s performance from Adam Ant (9) and his band might as well be one of the best main courses in music. Charging straight out of the gate with 1981 B-side Beat My Guest, there’s instantly no denying that the man once known for some of British pop music’s biggest hits can still hang with the very best. The whole idea of this tour was to deliver the greatest hits from Adam Ant’s entire catalogue, plus some rarities and this opening gambit certainly shows that well. Flanked by five backing musicians, including two drummers, as well as two colossal banners bearing his name, Adam Ant appears on-stage just as captivating as in his heyday. Of course, having almost forty years worth of brilliant material to call upon can’t hurt, and throughout the night there’s pretty much something for everyone. Pretty much all of Ant’s greatest hits get an airing across tonight’s mammoth 26 song set – from the chant-along party atmosphere of Antmusic to the jazzy balladry of Young Parisians (complete with overblown faux-French vocal delivery), but it’s telling of Ant’s musical prowess that even the cheesiest of moments manage to remain highly enjoyable. And, curiously, whilst the hits are all well and good, some of the night’s most impressive moments do in fact come from those B-side cuts in the set. Casual listeners might not realise it from the poppier tones of his more well known work, but Adam Ant is more than capable of going slightly harder when he wants to – as evidenced by the riff-laden B-Side Baby and the almost proto-industrial electronic stomp of Greta X. Things are never too far from pop though, and for every rock track in the set, there’s a new-wave ballad like Can’t Set Rules About Love, delivered with emotion and power in equal measure by Ant. For all that though, there really is nothing quite like seeing a packed out theatre go collectively all kinds of mental when the off-kilter screeches and pounding drums of Prince Charming suddenly kick in mid-set. The sight of 2400 or so people all ‘dancing the Prince Charming’ like it were 1981 all over again really hammers home just how much Adam Ant and his music mean to generations of music lovers.

By the time the set rolls around to its eventual conclusion, there’s really only one way it could possibly be capped off. Stand and Deliver, one of Adam Ant’s most endearing hits, and arguably one of the most popular tracks of the 1980s. Naturally, the crowd response threatens to shake the Bridgewater Hall to its very foundations, and the resultant singalong Ant leads them on is simply a joy to behold.

Of course, you’d think that was probably it, but with a short amount of time still left, the band return to the stage for one final trio of songs – a medley of B-sides Lady and Fall In, Red Scab and the grand finale Physical (You’re So), a track once paired with Dog Eat Dog perhaps best known to rock fans from a cover by industrial outfit Nine Inch Nails. Of these, it’s the latter that impresses most, with heavy distorted guitars and an almost sneered vocal line that brings an unexpected final stomp to the night’s events.

Perhaps the best thing that can be said about tonight’s show is that it not only manages to confirm Ant’s status as one of the most prolific performers of the past few decades, but also makes the prospect of more future releases from the man whose continual reinvention over the last few decades has been a genuine triumph. Whatever Ant does next, you can be sure he’ll have thousands of fans, if not more, waiting with bated breath.