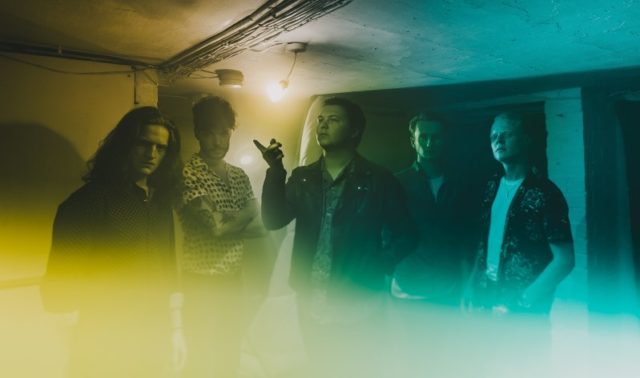 It’s a busy time in the world of UK rockers Fizzy Blood. They recently released a new single, and have been tearing up the UK in the company of none other than While She Sleeps. Just before that tour started we caught up with their guitarist Paul Howells to talk about all the exciting things happening for them over the next few months…

You’ve just released your new single, Pawn. Is this a taste of things to come for more new Fizzy Blood music later in 2017?

Absolutely. We’re gonna be releasing a steady stream of new music this year and putting out a new EP. Pawn is definitely one of the more raucous tracks but there’s plenty to bang your head and scrape your knees to. The songs all work together to create one big vibe which is something we really wanted to aim for because it’s a feature of all the records that we love.

You’re currently gearing up for a long run of shows with While She Sleeps on their new album tour. Things are about to get fun and sweaty aren’t they?

You’ve got no idea! I don’t think even we have any idea what we’re getting ourselves and everyone else in to, we can’t wait to find out.

For any While She Sleeps fans who haven’t seen you live before, or potentially even heard you before, what can they expect from Fizzy Blood on this tour?

We’re gonna be loud, we’re gonna play fast and we’ve got no fucks left to give about our own wellbeing. We’re on about 7:30 most nights which for some is a bit early to cut loose, but to those people I say get the beers down you before you turn up and we can all have a good time.

Which member of Fizzy Blood is the biggest diva on tour? Is there anyone who you might occasionally wish you could *forget* to take with you to the next show?

It’s probably me (Paul) It’s a wonder I can even get to sleep anymore with all the things that have come out of my mouth rattling around my head when I’m lying in bed. I just get caught up in the heat of the moment, what can I say?

You’ve got an interesting Summer of festivals coming up after the tour. Firstly Camden Rocks Fest, which is always a great day in the London music calendar. Do you know where and when you’ll be playing yet?

Yeah, and plenty more still to be announced, very exciting. I think we’ll be on about 3.30pm at The Monarch for Camden Rocks.

After that, you’ll be making your return to Download. Having played the Acoustic stage three years ago, are you looking forward to being able to put on the full show this time?

We’re all buzzing to have been asked back and to play on a slightly bigger stage this year. We did actually do a full set last time although you’re right, it was on the acoustic stage. We went to scope it out the day before our set and the vibe was pretty morose. We noticed they did actually have the backline to accommodate a full band, so we asked the stage manager who, no joke, went by the name of ‘The Fox’ if we could just play our normal set and he said it was cool. So we played a full set on an acoustic stage, which everyone seemed to dig. We definitely will be bringing the benefit of 3 years’ experience with us this time though.

Moving onto later in the year, you’ve also got 2000 Trees and Tramlines in your schedule. With it being your first time at both events, is there anything particular you are looking forward to about either festival? Being Yorkshire lads is Tramlines something you’ve attended before as fans?

We actually played on the fringe of Tramlines back in 2015, and because we weren’t officially playing we couldn’t get in to go see any of the actual stages, so just being allowed inside the actual fence is something I’m looking forward to this time. 2000 trees will be a brand new experience for us, we’ve never been to the festival or seen the site or anything and the line up looks pretty sick so I’m also looking forward just to experiencing that one for the first time. There’s always something special about your first time at a festival.

Lastly, if we caught up again in 12 months time, what things would you like to have happened for Fizzy Blood over the next year?

Hopefully we’ll be working on another record, some more international shows in places we haven’t been yet would be great (Australia, I’m looking at you) and maybe I’ll have moved out of my dad’s house. Who knows?

Catch Fizzy Blood next at Camden Rocks Festival on the 3rd of June (tickets here) as well as on The Dogtooth Stage on the Sunday of Download 2017 (tickets here). Their appearances at 2000 Trees and Tramlines take place in July.