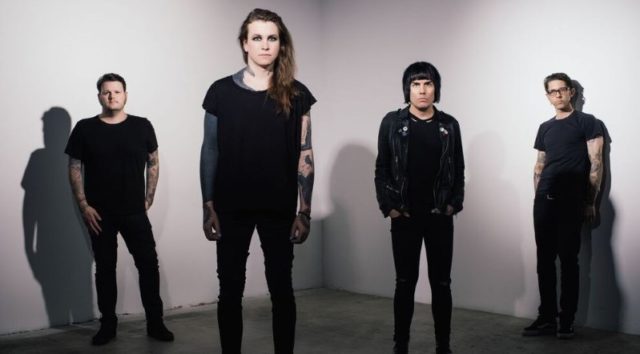 Before they headlined the Signature Stage at this years Slam Dunk festival, Rock Sins were able to catch up with Laura Jane Grace and Atom Willard from Against Me! With their extensive touring to promote their latest album and the release of Laura’s book, things have been non stop for Against Me! recently, and look set to continue that way in the near future as well….

Rock Sins: So to just start off, how’s Slam Dunk been for you so far over the last few days?

Laura: So far so good. I mean no fucking complaints at all. Awesome crowd and it’s really good to see so many old friends. Our stage fucking rules.

That stage is wicked this year, must be nice to play with Milk Teeth again after the headline tour.

Laura: Yeah and we’ve tour with Frank Iero, toured with The Bronx and Less Than Jake so it’s cool to see everyone. The festival is just really varied as well with what the site is like each day so that keeps it exciting. But they’ve always taken care of us as far hospitality goes. Like we’ve had a nice dressing room so no complaints what so ever.

Does Slam Dunk feel any different to other festivals you’ve played? Here in the UK there is nothing else quite like it.

Laura: Honestly it feels close to some American festivals we’ve played before. But in that way specifically it does feel unique to a UK festival. We’ve never played a UK festival like this for sure.

I guess it’s always been the closest thing we’ve had to Warped Tour.

Laura: Exactly, it’s like Warped Tour but not miserable.

So you’re several months into the Shape Shift With Me album cycle now, how is it going for you.

Laura: So the record came out in September 2016 and it’s been fucking non stop since then. We went on tour immediately in the US with Bad Religion for a month and did some headline stuff right after that. I had my book come out right after that and did a book tour in November. We were over here and in Europe in December and then went out with Green Day in the new year. Which was like a month and a half long and then went out to Australia. And here we are now so it all feels really connected for us.

So are things starting to slow down for Against Me at all?

Atom: We have a 2 month long US tour coming up so no. It feels like we’re hitting a kind of plateau and going full speed.

Laura: Everyone is really tight now. We’re playing really well. All the songs feel natural now. At this point I’ve stopped looking at life in that way. Everything just has its flow.

So obviously you mentioned that you have the book out now as well which I’m midway through reading. Was it difficult to put everything out there so honestly?

Laura: Yes. I think it probably took a decade off my life. I’m only 26 years but look at me, I look like I’m forty now.

Don’t worry you don’t look a day over 26. But reading through the book it’s so brutally honest about everything the band has gone through so I imagine it must have been tough to write.

Laura: It was really draining. I mean when I finished it I didn’t know if I’d be able to do anything creatively again. It was hard to just condense it all cos you have a limit when it comes to the words you can use in a book. I couldn’t do like a million words. So to be as honest as I wanted to be and put it all out there but also have to condense it is tough.

In the book you talk about the difficulties you faced with each album. Did Shape Shift With Me feel like more of a comfortable album to record?

Laura: I think the difficulty came from trying to finish the book and the record at the same time.

Atom: That probably was the most adversity within the process. The songs themselves came together fairly easily. Like it was all written on the road and during tours. So that kind of stuff was pretty organic in terms of the conception of the actual songs. But for you the act of balancing the two things…

Laura: Have you ever done a record where you’re living in the studio? Like talking about being comfortable. Literally sometimes you’re recording in your pyjamas. That was a first, where you just wake up and start recording. Just had to walk downstairs.

Atom: And then when you’re done just go straight back to bed.

Laura: I’d never done that before. So in that way it was super comfortable. And there’s many moments on the record where that was the first time we tried something and that’s what made it onto the record.

I think this reflects in the sound of the record. I guess it’s not quite as angry as you’ve been in the past, it feels a bit more upbeat.

Laura: I mean I’m fine with that.

I guess it just sounds like you’re a bit more content with the position you’re in now.

Laura: Honestly I sometimes feel kinda stupid for that. Like I mean it is reflective of going on tour and having adventures. Or falling in and out of love. But to then put out a record like that and then immediately have the world fall apart. It’s like now Donald Trump is president and it’s like “oh shit I was totally blindsided by this”.

Yeah we’ll get onto that more in a bit don’t worry.

Laura: Yeah playing our songs and it’s like “oh shit”.

I guess this is a good time to move onto this question then. But given the current political climate in America particularly but it’s not amazing here either.

So do you think it’s important for bands to use their platform to try and educate people and take a stand against injustices?

Laura: 100%, like the system and status quo is always very threatened by art. Musicians and bands have a direct line to youth and youth is what changes things. You have a way of communicating to people that is still trusted. It’s not full of shit like politicians so don’t fucking abuse that. Now it’s more important than ever.

Over here it’s being reflected now with plenty of bands trying to get younger fans more involved with politics.

Laura: Sure, I mean this morning I woke up and saw a video of Billy Bragg telling people to vote for Labour and I was like “goddammit Billy Bragg you’re still out there fighting the good fight”. He’s been out there doing that since the 70’s and I think there’s so many bands in the UK and US who have kept that going and keep it alive. And it’s up to the younger generation of bands to keep that going to.

I think that covers it suitably really. So going back to the book quickly but you talked about how you used to face a lot of adversity from older fans as the band changed. Does this sort of thing still happen?

Atom: What do you mean by older fans now? I think there’s a really wide spectrum of people that come to our shows now. There’s people who have been fans from the beginning and then there’s people who have just found out about us from one way or another. I mean everyone is welcome at our  shows, we want everyone to come and have a good time for whatever their reason is for being there. If people come to our shows they know it’s a safe where everybody is welcome and equal. Everybody is just there to have a great time.

So do you feel like those people who used to be angry have come back around to you now.

Atom: Their perspectives have changed

Laura: Yes their perspectives have changed thank you Atom.

So when it comes to newer fans. Your band are seen as so important to the trans and non-binary communities. Does it still ever feel odd or surprising that you’re seen as such a key figure and role model. Like the band in general and everything you stand for now.

Laura: That’s heavy, I’m not too sure…

I’m non-binary myself and have struggled with gender dysphoria so your band and that album was pretty life changing for me. And I know other fans feel the same. So I just wondered how you feel when people come up and say things like “this album made me feel happy about who I am”.

Laura: That’s fucking awesome, this is what I want to hear. I want this when I create art. To reach people and to connect on that level. And I mean I have that moment nightly being up on stage, I never thought in a million years this would be happening. Hearing people sing songs off that record, it’s like this fucking blows my mind. And it gives me a sense of community, meeting people after shows who I can relate to or connect with. Those aren’t just passing meetings for me. Often times I make friends that I’ve kept for years.

The sense of community at your shows is so strong now.

Laura: Yeah I dig it.

So lastly, what does the near future hold for Against Me. You said you’re back on tour after this and are there plans to get back to the UK soon?

Atom: We’re working that out, hopefully we plan to get back to the UK sooner rather than later.

Laura: Yeah right now we just have a lot of touring on the books. But yeah I keep writing songs, I’ve got this song I wanna play you which is really good.

Well I guess that covers everything. Thank you both so much for your time.

Both: Awesome, thank you.

You can check out Rock Sins’ Slam Dunk Festival South review, which includes Against Me! headlining performance on the Signature Brew stage. Against Me!’s current album, Shape Shift With Me, is out now on Total Treble Music. 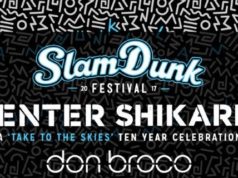