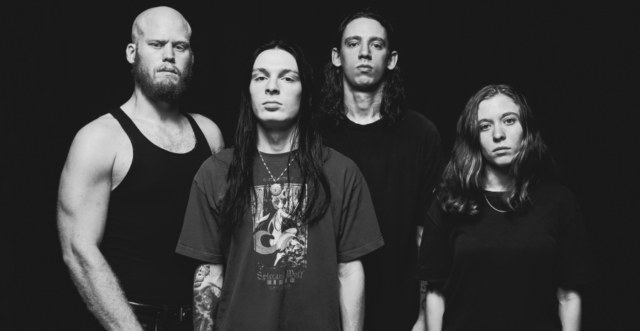 Code Orange are one of the most unique and intense bands in music right now, creating nightmarish soundscapes that are impossible to escape. Their newest album Forever is already one of 2017’s best and they have been touring relentlessly in support of it, including a stop at this year’s Download Festival. I was able to catch up with guitarist Reba Meyers to discuss Download, touring with the likes of Gojira & System of a Down, and the future of Code Orange.

So, how was the show for you?

Reba: It was awesome. I was hyped the whole time and really into it, the crowd was really into it. We’ve been going from playing these arena shows with System of a Down and these main stage festivals, so it’s a just different. Today was in a tent, everyone was packed in together, people clearly knew who we were,  it’s the U.K  and we have easier communication, so it went really well, the vibe was really great. We were all pretty psyched after the set.

You guys are having a killer 2017 so far. You released Forever at the beginning of the year, then did the shows with Gojira, and then as you said you are now on a festival run coming off the back of touring arenas with System of a Down. You must be feeling like you’re on top of the world right now?

Reba: Yeah it’s pretty awesome. we’re just trying to focus and take this as it is, we don’t fucking know if this opportunity is ever going to come to us again. This could be our only opportunity playing in an arena in our entire lives, we don’t really know, so we’re trying to focus and enjoy ourselves obviously, but also make sure we grasp this opportunity and play our best, give our best energy hopefully learn something in the process playing these giant stages. There’s so many things we can learn from doing this and it’s been really good. So far we have generally been really happy with it, even when the crowds haven’t been participating or not interested, it’s still an opportunity for us to play up there and to put ourselves out there, and if they don’t care, they don’t care but we are learning to make them care. It’s been a struggle but it’s been good.

With festivals, you are going out and playing to large crowds that are largely unfamiliar with you. Do you think those support slots and bigger shows help to better prepare you for something like this.

Reba: Yeah definitely. We are so thankful for that Gojira tour, honestly, if we were just going into this without that we would be doing so-so, but that was the perfect prep for this because it was crowds who didn’t know who we were for sure, but there were pockets that did, but they were all really open minded people so we didn’t really have to push to get them to notice us. Gojira are a pretty weird band and their fans are usually pretty open minded so it was perfect for us, we learnt on that tour that got us ready for this, then I’m sure this will get us ready for anything that can be thrown at us.

You mention about fans being open minded. How do you write a set for something like this or that. Your music traditionally isn’t 3 or 4 minute easily digestible songs, it’s a really super intense experience. So is that always in the back of your mind when writing sets for shows that aren’t your own.

Reba: Yeah for sure, Jami (Martin, Drums) is the one actually who usually brings the idea of a setlist to us and we all talk about it, it’s almost like we’ll spend a whole practice just talking about the setlist. We also try to work it with the loops and stuff between all the songs to make sure the vibe is really smooth, because you have to show people where you’re going, if you just show song, song, song they are going to be very confused because they don’t know where are songs start and end, so it’s like a big long story, like a movie almost, but that’s are set and we have to take people and make them understand. We always start really aggressive and really because that’s who we are overall, but we do try to show them another side of us, so it’s like kids that maybe aren’t into that aggressiveness can hear a song like ‘Bleeding in the blur’ or ‘Ugly’ and know that we have multiple sides to us, so yeah we definitely spend a lot of time on that.

It’s funny that you mention having those multiple sides. I played both Bleeding in the Blur and Forever to my mum and the first thing she asked was ‘Is that the same band?’ But the moment you drop Bleeding in the Blur in the set is almost like a pause for the audience to catch their breath a little bit.

Reba: Yeah and us (laughs).

When I first heard Forever all the way through, I described it as being nightmarish and like Jacob’s Ladder set to music. It must be harder for you to create that atmosphere on a big stage in the daytime as opposed to today where you were in a dark tent.

Reba: This was the perfect place to do that, and last night we played in Brighton in this sweaty 300 cap venue and it was perfect, it was easy. But we have learnt it’s not always going to be easy, so we’ve learnt how to do it in the daylight to people who are literally sitting down miles away, but we’ve learnt how to take them in, you’ve just gotta push way harder up there. Eric (Balderose), our other guitar player, he spends so much time tweaking the loops so you can really hear all the different elements, weird stuff like that brings people in. You can find ways to catch people’s eye, we may not be the type of band that they would even listen to, but they will come to shows and say that I’ve never listened to you guys and I probably never will but that show was amazing.

When you wrote Forever, did you ever think it would blow up the way it has? It is a really unconventional album to get as big as it has done.

Reba: Yeah I don’t even remember where my mind was. It was such a stressful time, we were all just trying really hard to make it something that we were proud of, then after we were like ‘Ok, I’m proud of this. This is the best that we could have done at this time’ then it was a case hoping that it did well, it’s always like that second thought, sometimes we will ask our close friends their opinions and ask them to weigh in on places where we’re lacking or maybe places where there’s writers block, but for the most part our first thought was let’s just make this the best album we can make, then after that see how we can push it to other people.

One of the things I heard you guys talking about onstage was the youth movement and how they young bands are here to kick the doors in and take over from the older bands. Is that something that makes you guys proud, that you are a young band making challenging music and putting it out there for the world to see.

Reba: Sure, It’s the only thing that keeps me going pretty much. There’s, bands that I admire that are older but they’ve already had their place for the most part, and they are inspiring young people, but we are the young people that are inspiring young people. It’s got to be a challenging thing within your own age group. Even for us, I don’t have a lot of places to look for our age that’s inspiring, I’ve kind of got to find it myself, but I don’t think it should have to be like that, there should be young kids who see bands that are doing it now that are young, and we want to be that and it definitely makes me proud, and we are just trying to do our best to make it stick and get people to notice us. It could end whenever for us, so we’re just trying to enjoy it while it’s here.

You can tell the tide is definitely changing.

So after all the festivals are done with, what is next for Code Orange.

Reba: Well we are pretty much at the end of a really long tour run so we’re going to go home and we’re going to write a couple of songs for a couple of different things, then start getting ideas flowing for more music. We are going to play a couple of festivals, we are doing Chicago Open Air, and a few others which should be great, then we are going to take some time for the other side of the band.

If you weren’t in Code Orange, what would you be doing? Would you still be playing music or was there a back plan for something else you wanted to do.

Reba: My original plan was to be a musician. Not in this world, but I always liked classical music so if I wasn’t thrown into this so quick I’d probably be doing that. But music was the only thing, it’s always music.

If someone was putting together a time capsule to commemorate Code Orange, what 3 songs would you put in there to best sum you up.

Reba: I would go with ‘My World’, ‘Bleeding In The Blur’ and ‘Forever’  I know it’s a lot of new ones, but it’s what I’m feeling right now.

If someone said to you tomorrow Code Orange has to end. How would you want to be remembered as a band.

Reba: For being young, pissed off, new and for being a band that doesn’t give a fuck about anyone but Code Orange, we’re going to us, we’re unique and that’s it.

Lastly, do you have any closing comments for the Code Orange fans out there.

Reba: Start bands, play music, try not to copy other people, do your own thing, be proud of it and not scared to be the freak that you are.

Code Orange’s Forever is out now on Roadrunner Records. You can find out what Rock Sins made of Code Orange’s Download performance in our in-depth festival review.