With Download Festival 2017 mere hours from kicking off fully in style, our latest introducing feature turns to one of the new bands gracing the festival this time out: Irish outfit Dead Label! Their drummer Claire has kindly spent some time with us giving us the low down on what they’re all about:

CP – Well the three of us where in a band together before Dead Label, it was called VX. That was more of a kid band. When that band ended we decided to stay as a three piece and make the dream happen!!!

CP – Because I’m here I’m going to say me! Hahahahaha. Ah no. We all have moments. Danny is brilliant at accents, we have a toll bridge game. When you’re talking to a cashier at the toll bridge, you have to talk in whatever accent the other two say before we get there. It’s so much fun!

CP – It generally starts with a riff, we jam the riff and see where it develops. Usually Danny has a riff he likes to coincide with it and we jam that too, eventually it takes a structure and we take it apart many times until we are happy with it!

You recently released a new single (Pure Chaos) and an accompanying video, is this the sign of things to come later in the year with more new music?

CP – We are in the middle of writing the next album. Pure Chaos is defiantly a taste of what’s to come! Or is it…

We will also be seeing you guys play The Dogtooth Stage at Download Festival this year! Are you excited to hit the hallowed Donington turf as performers?

CP – Excellent!!! We are so excited! It’s a dream come try to play at Download. It’s a monumental part of metal history and we always wanted to be apart of it! It’s such an honour to join bands like System of a Down and Rob Zombie.

CP – My personal favourite is Void off our album Throne of Bones. It’s heavy and chunky. I enjoy playing it so I hope people like it!

CP – Metallica. That would be amazing!!! That’s the one dream I have held on to the longest in life! We have already played with Machine Head and Gojira, but we would certainly tour with them many times if they will have us!

CP – Who doesn’t like the simpsons??? Bart. He’s loveable and trouble! He loves pranks and says cowabunga. What’s not to love about that!!!

Dead Label can be seen opening The Dogtooth Stage on Saturday morning of Download Festival 2017 – so get in early if you want to see them! Last minute tickets for Download can be acquired at www.downloadfestival.co.uk/tickets – pick them up at the gate! 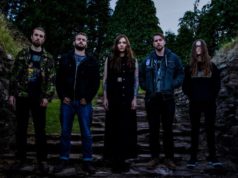