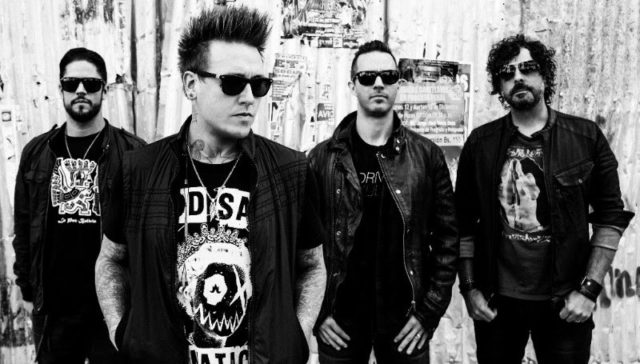 The average person could count on one hand the amount of bands from the nu-metal era that are not only still going, but still relevant and Papa Roach would definitely make that list.

Popping over on a quick jaunt to London to make up for a missed show whilst promoting new opus Crooked Teeth, the band are doing an evening show in the Hippodrome in Kingston and the queue is snaking up the road well before show time. Eventually, though a couple of hundred (hot and sweaty) rockers are packed into the nightclub for an up close and personal show that hasn’t been seen since the early 00’s.

Forgoing a support act, Papa Roach (8.5 / 10) takes to the stage dressed all in black just after 9pm and modestly open with newbie Born for Greatness from Crooked Teeth. Jacobi Shaddix (vocals) leads the charge right from the get go working both the crowd and band into a frenzy that continues for the next 60 minutes.

With a 5th member now filling out the sound on guitar, keys and samples depending on the song the band sound huge in this small club and being so close to the barrier is doing nothing to keep the temperature down, especially when Jacobi insists on a Wall of Death during 2nd number Between Angels and Insects. Just when you think that maybe it’s a bit early to drop such a behemoth of a song it becomes apparent that set position means nothing when you’ve stumbled into Banger Central as they pull out She Loves Me Not for the first time in God knows how long and Revenge from breakthrough album Infest, inciting a room full of people to yell “REMEMBER THE GIRL!” as one during its opening.

As Jacobi states “a good rock concert is better than sex” he proceeds to prove it by leaving guitarist Jerry Horton and bassist Tobin Esperance to work the front row themselves while he performs Getting Away With Murder from within the crowd, walking around the bar and dancing with as many people (women) as possible.

As they play what they admit is a risky cover of Song 2, an epiphany is reached that with all the rock, metal and hip-hop influences he draws upon, in addition to his own hectic yet affable personality, Jacobi Shaddix, just might be the greatest frontman ever and the band as a whole show absolutely no sign that they’ve already done a set earlier in the afternoon.

As they wrap up Help, which sounds much more like a Papa Roach song live, than it’s over produced recorded version on Crooked Teeth, the band bid a fond farewell with Wanna Be Loved and everyone leaves with a huge grin on their face, having just had one of the most joyous times of their lives.