There’s only one place to start this preview – with the mighty Amon Amarth. Having risen through the Bloodstock ranks over the course of a couple of previous visits, the teutonic Swedish masters of Viking metal somewhat upstaged their fellow 2017 headliners Megadeth on their last appearance. Everything about Amon Amarth is perfect for Bloodstock; their history, the subject matter of their songs (you cannot get more metal than ****ing Vikings for god’s sake), their appearance, their stage show complete with fire-breathing dragon, and of course, the songs themselves. Good luck to Ghost and Megadeth trying to match this one. Valhalla Awaits! JG

Often thought the fifth member of the Big Four, Bay area thrashers Testament are always well received wherever they play on UK soil and Bloodstock will be no exception. Having released one of the greatest thrash albums of this century with The Formation of Damnation, and continued their productive recent output with The Dark Roots Of Earth and Brotherhood Of The Snake, expect a real mix of old and new during their set. With the man mountain Gene Hoglan pummelling the drums into utter submission and one of the most likeable frontmen in metal, Chuck Billy, at the helm, Testament should be one of the highlights of your weekend at Bloodstock 2017. JG

Tennessee’s finest export since Jack Daniels make their return to Catton Park a whopping four years after their last stint, gracing Friday’s lineup with their ruthless charm. A year on from Mark of the Blade sliced clean through our ears, Bloodstock will welcome the deathcore delinquents with open, flailing arms. If The Saw is the Law, take your Eternal Refuge at the Ronnie James Dio stage, you’ll find a few other Elitist Ones there too. AC

When you factor in a criminally underrated 80’s output and a band that have treated age like they’ve treated poor creative (Kreative?) Output and you’ve got another contender for set of the weekend. Municipal Waste might have been absent awhile but with a new album and their old, devastatingly good live form rediscovered the Ronnie James Dio stage might as well be renamed circle pit city for their set. JH

Are you ready to swear right here, right now before the devil? Saturday’s storming Swedish headliner Ghost make their Bloodstock debut with a set jam-packed with timeless anthems. Finally witnessing this enormous band bring their headline act to the UK, Catton Park will descend into the depths of hell for one night only. From the Pinnacle to the Pit, the mysterious masked mavericks won’t rest until Derbyshire’s Cirice is ablaze with blasphemous flames. AC

For a band that generated so much backlash when first announced in 2012 it’s been amusing to see Hatebreed grow into a mainstay of the Bloodstock lineup. You know them, you (really should) love them and with a reservoir of songs as chest beatingly vital as Destroy Everything delivered by a frontman as passionate as Jamie Jasta it’s going to take a lot for Hatebreed to be forgotten this weekend. JH

Second time out headlining Bloodstock Open Air and closing the 2017 edition of BOA are big four thrash legends Megadeth. Like their fellow big four compatriots Slayer who closed the festival last year, this is their second tilt at closing Bloodstock after a well received appearance three years ago. Last year’s album Dystopia saw a much needed return to form, and the addition of Dirk Verbeuren is a high quality replacement for Chris Adler. A very safe bet to close Bloodstock 2017 in style, Holy Wars await. JG

Another band who have a long history with Bloodstock, including headlining a decade ago when the festival was somewhat smaller than it is today, Arch Enemy return to Bloodstock a rejuventated force. The “at the time” questionable decision to replace Angela Gossow with The Agonist’s Alyssa White-Gluz turned out to be nothing short of a masterstroke, with War Eternal the best album the band had released in years, and the live show given a similar spark of new life. Special guests to Megadeth this time out, expect to hear some new material from their upcoming album Will To Power and a boatload of favourites in what will be one of the sets of the weekend. JG

Warning warning – the Newport helicopter lands in Catton Park. A testament to Bloodstock’s rising popularity and clout in the British metal festival scene, landing the Welsh party starters for a Sunday night set is a step in the right direction. Sound the Siren and jack up the Volume, Skindred’s next stop on the European festival circuit would raise the main stage roof if it had one. AC

Another band of Bloodstock veterans; Kreator haven’t made an appearance at the festival since 2011. Judging by their recent tour though this isn’t a set to miss. Most of the golden age of thrash bands have started to slow down after delivering a decent crop of albums around the late 2000’s. Testaments last two efforts have been shaky and Megadeth haven’t had genuinely world beating form since 2008’s Endgame. Kreator, on the other hand, haven’t had a bad album since the 90’s. Every album delivered this century – from Violent Revolution through to this year’s God’s of Violence have been world class thrash metal. JH 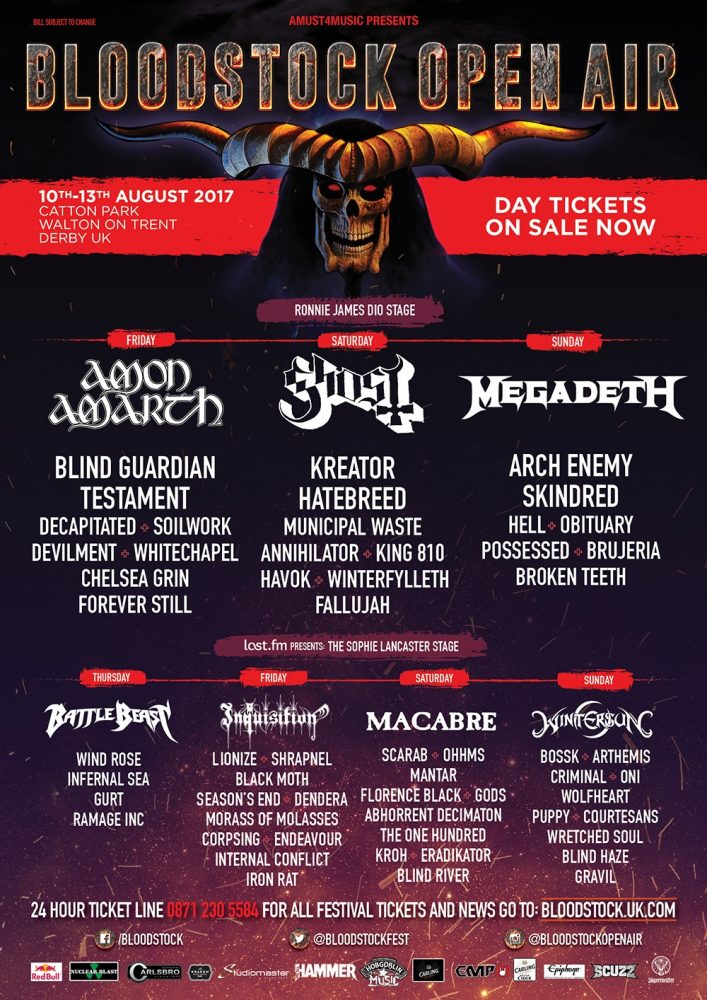 Bloodstock Open Air Festival 2017 is now officially SOLD OUT of weekend tickets. Day tickets can be purchased for the festival from the official festival website. Stay tuned for lots more Bloodstock coverage, including a preview of the smaller stages and extensive reviews from the festival itself.