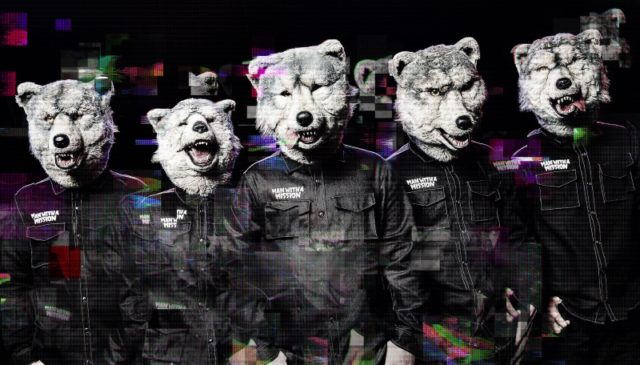 Man With A Mission might be a huge arena filling rock band in Japan, but over here in the UK they are less well known. So much so that tonight they cram into the Underworld to give their UK fans as well as many fans who have travelled from Japan, an intimate taste of what Man With A Mission offer.

Decked out in wolf masks, Man With A Mission (7) clearly have a strong visual element which when backed up by their usual arena show would no doubt feel more impressive. And given how hot things were getting in the Underworld, it’s impressive that they stick out the whole show in these masks. Initially the band do seem a little uncomfortable on such a small stage, everything seems cramped and it takes them a while to find their groove. Once they eventually do, Man With A Mission end up delivering one of the most bizzare but fun rock shows. Musically they play a weird blend of several styles. Their are huge pop melodies mixed in with almost math rock instrumentation. Then moments later they’ll shift into a nu metal bounce complete with DJ scratches lifted straight from 2001.

Midway through the set the band leave the stage after an odd drummer vs DJ battle. What then follows is a short anime shown on a TV at the back of the stage. Sadly this feels like the sort of thing that would only work in an arena and it seems like this is just to allow the band to have a break. Still the strangest moment is yet to come. Towards the end of the yet they decided to deliver a bizarre nu metal rendition of Smells Like Teen Spirit which was quite terrible but the audience seemed to have a fun time. In the end that’s just the overall feel to this set.

In terms of quality it is all over the place but it never becomes boring. This is the sort of thing that could only come from Japan. Mainstream rock bands in the UK would never dress up as wolves and come up with a backstory for the band. Their fans clearly adore them, even if they are nowhere near as popular here in the UK and its difficult to not get caught up in the vibe of the room. If anything rock music shouldn’t be boring and Man With A Mission prove they are anything but boring.