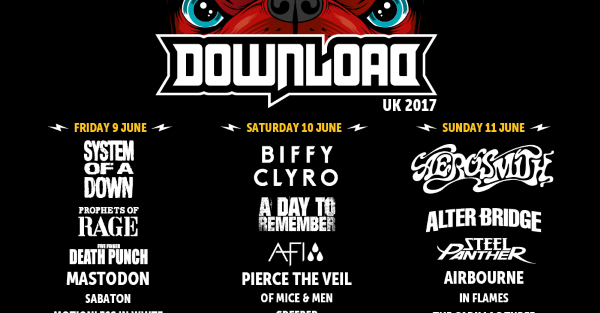 So, here we are at last, the final part of Rock Sins coverage of the 2017 Download Festival. Having covered all the other stages for the full three days of the event, lastly we’re focusing on Sunday’s fun and games from the main stage. Before we launch in, if you’d like to catch up with any of the rest of our Download 2017 coverage you may have missed, please use the links below:

It may be only 11 O’Clock but the Download arena is packed full of plenty of Fozzy fans and Jericholics in time for Fozzy (8) to kick things off on the main stage. Launching into their hugely popular new single Judas from the off is a bold move, but one that goes down very well with the ever growing crowd. Chris Jericho owns the stage in his typically charimatic style, getting every ounce of audience participation out of even those who are still half asleep. No-one remains sleepy for long, with songs like Sandpaper and Eat The Rich reverberating around thanks to Rich Ward and Billy Grey’s dual riff attack, and the closing Enemy gets a huge reaction. A massively popular start to the day. There was just one last thing left to say: “Download….YOU JUST MADE THE LIST!” JG

In Flames (7) continue to divide opinion amongst the generations of their fans but their return to the Download main stage eight years after they last played it was most welcome. What was not most welcome, at least to their frontman Anders Friden was the derisory cooler of beer that formed their rider, which was then given pride of place on stage for the remainder of their set in the unintentional comedy moment of the day. Back to the music and In Flames were on good form with a setlist spread quite evenly from material of the last 15 years of the band, with the loudest reactions being reserved for songs such as Leeches and Cloud Connected, which still sound fresh even though they are now 11 and 15 years old respectively. The obligatory Take This Life brought things to a very satisfactory conclusion, with a very large Download 2017 crowd saluting their Swedish onstage heroes with their approving metal horns. We look forward to their UK return in December with Five Finger Death Punch! JG

As far as regular appearances go, Steel Panther (9) might have a claim to more or less being Download Festival’s house band in recent times – this being their fifth appearance on Donington’s hallowed grounds in the last eight years. The LA comedy-metallers have been growing a strong UK fanbase for years now, having even made it as far as headlining Wembley Arena on their last UK tour, and so them occupying third place on the Main Stage bill once again after last doing so in 2014 feels like a victory lap of sorts. As you’d expect from a band so firmly tongue-in-cheek, all of the obligatory Steel Panther moments and tropes are here tonight, from the David Lee Roth-esque posturing of frontman Michael Starr, to the synchronised stage moves of guitarist Satchel and bassist Lexxi Foxx, to the bullying of the latter by every other member of the band.

Now onto their fourth major-label album, the band have more than their fair share of big songs too – from the powerful opener Eyes of a Panther to the hilariously offensive power-balladry of Fat Girl (Thar She Blows). For all of their comedy stylings however, what remains most remarkable about Steel Panther is just how brilliant they all are as musicians. Underneath all the 80s aesthetic lies a genuinely gifted set of musicians – Satchel in particular proving an incredible axeman as he shreds through the likes of new track Goin’ In The Backdoor and fan-favourite Death To All But Metal with a gleeful smile. It wouldn’t be a true Steel Panther show without a stage invasion though, and as the band begin to introduce their 2011 track 17 Girls In A Row, they decide to one-up themselves somewhat, as they virtually fill the entire stage with excited women from the crowd – much to the probable annoyance of security.

Chaos pretty much ensues from there on out, as the crowd of women some fifty-strong descend on the members of Steel Panther, some snapping photos and dancing, others seemingly attempting to get off with them. The anarchy continues all the way through following number Gloryhole before the stage is eventually emptied and the band close with their massive Bon Jovi-esque anthem Party All Day (F*** All Night). Where Steel Panther can go from here is anyone’s guess, however given the lofty heights they’ve already reached, it might not be too far-fetched to wonder if they’ll soon climb the Download Festival bill even higher. JFW

There had already been many impressive performances on this Sunday of Download 2017, but then Alter Bridge (9.5) came along with their A game to put all the others to shame. With an opening salvo including Come To Life, Addicted To Pain and Ghost Of Days Gone By, and Myles Kennedy’s voice utterly pitch perfect, the enormous crowd assembled before Alter Bridge was having a very good time. Having reached the point in their career where they now have a considerable vault of songs to draw from, being able to drop a song like Blackbird in the middle of the set to a thunderous reaction and subsequent singalong shows just how far they’ve come in their twelve plus years of visiting the UK.

Unlike other previous Alter Bridge performances in the UK, both at Download and elsewhere, there was no slow down moments for the likes of Watch Over You or Wonderful Life, which were interestingly omitted from the setlist. This was an all out riff assault from start to finish. And thankfully, unlike their performance three years ago which was great but marred by the odd sloppy moment, this was borderline perfection from start to finish.

With Scott Phillips and Bryan Marshall pummelling their respective instruments as the intro to Metalingus boomed out across the Donington fields, the volume of those watching cranked up another notch for one of Alter Bridge’s most well known songs. Favourites new (Show Me A Leader) and old (Rise Today) brought things to a close in spectacular fashion in the glorious early evening sunshine. Many people have been saying it for years (myself included) but it must surely only be a matter of time until Alter Bridge are given the chance to headline the most famous of rock and metal stages at Donington. They’ve done their chances absolutely no harm with this blistering showing. JG

So, to the (supposed) UK farewell of the beloved Bostonian rock legends Aerosmith (5). Three years ago, Steve Tyler and friends produced one of the greatest performances ever seen on the Donington stage (which was captured and subsequently released as a live DVD, Aerosmith Live At Donington). Anticipation was high in the hope that they could match their efforts of three years ago, or maybe even go one better. And….I’m sorry to say, but it was not even close.

From a technical point of view, there was nothing wrong with Aerosmith’s performance at all. Whilst not quite hitting the ridiculous vocal heights of 2014, Steven Tyler was still in very good form for someone approaching his eighth decade on this earth, while Joe, Brad, Tom and Joey were all excellent. The main issue lay in the setlist. On a band’s last ever show in a given location, you’d expect maybe a couple of deep cuts and a barrage of hits, particularly from a band with a back catalogue like Aerosmith’s.

Unfortunately, for the first two thirds of the near two hour show, what we got was an assortment of obscure choice interwoven with a few hits (Love In A Elevator was excellent as always), but then bewilderingly two overly long Fleetwood Mac covers. There’s absolutely nothing wrong with The ‘Mac, but on the (supposed) last ever chance to see Aerosmith, we’re fairly sure those in attendance would have rather heard the likes of Jaded or Pink or especially Toys In The Attic (!!!) than Oh Well or the enormously appropriate Stop Messin’ Around (we wish they had). It felt self indulgent by the band and this opinion seemed widespread throughout the crowd as there was none of the energy that accompanied their special performance three years ago, and indeed many were seen heading for an early exit.

Only once their worldwide mega hit I Don’t Wanna Miss A Thing roused the malaise out of the audience did Aerosmith hit something like the top gear we all know they are capable of on the likes of Come Together and Dude Looks Like A Lady. Even in the encore they decided to sandwich a cover of James Brown’s Mother Popcorn between Dream On and Walk This Way. The stage was blitzed with confetti and ticker tape as the band thanked everyone for coming and for all the years of support, but it was a disappointing end to what had been one of the best Download Festivals since the festival began, with bands, fellow festival goers and the comparatively glorious weather all playing their part in an otherwise fantastic weekend. Same next time year? JG