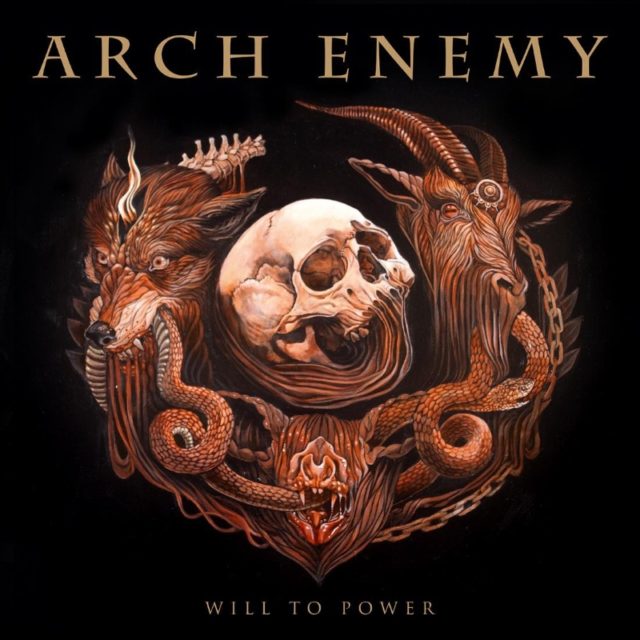 Arch Enemy are in something of an unenviable position. Having completely revitalised the band three years ago when The Agonist’s Alissa White-Gluz took on vocal duties from Angela Gossow, they dropped an absolute monster album in the shape of War Eternal, an album that has taken them to all corners of the globe. So, the question is, how the hell do you follow an album like War Eternal? Will To Power is the answer.

One comparison that could be made is to Machine Head after The Blackening. Locust wasn’t a bad album, it just didn’t stand a chance in hell of following what came before it, and there is an element of this at work with Arch Enemy’s latest offering. There are many enjoyable songs, and a couple of truly great ones, but as a complete body of work it’s just not quite in the same league as their previous effort.

What Arch Enemy have done very well so far is to make the most of what they have created. Arguably the album’s two strongest tracks have been chosen as the first two singles. The World Is Yours is a perfect example of what an Arch Enemy fan would want; fierce, riffs all over the place and a great vocal turn from Alissa. The Eagle Flies Alone is somewhat slower and more considered, with an attention grabbing intro and at least two great pieces of guitar work from Jeff Loomis and Michael Amott before Alissa growls a word. Her performance, in the chorus particularly is very impressive, as is a very trademark Arch Enemy guitar solo.

One thing sure to be a bone of contention with some fans is that Alissa’s clean vocals from The Agonist have finally come to Arch Enemy; It may only be for half a song, but it’s likely to send the tr00 metulz brigade into a frenzy. Regardless of what any haters may say, the mix of vocal styles fit well with the track and it’s good to hear Arch Enemy try something a little different. After the riff fuelled sprint that is Murder Scene (track number seven), the second half of the album takes a small but noticeable dip in quality. There’s no outright “bad” songs, they just don’t quite pack the punch that the songs in the first half of Will To Power do.

Overall, Will To Power is an enjoyable addition to the Arch Enemy back catalogue and solidifies the excellent start they made to “v2” of the band with Alissa White-Gluz at the helm. It doesn’t hit the heights of War Eternal nearly as consistency, but there is much here to be enjoyed.

Will To Power is released tomorrow (8th September 2017) through Century Media Records.