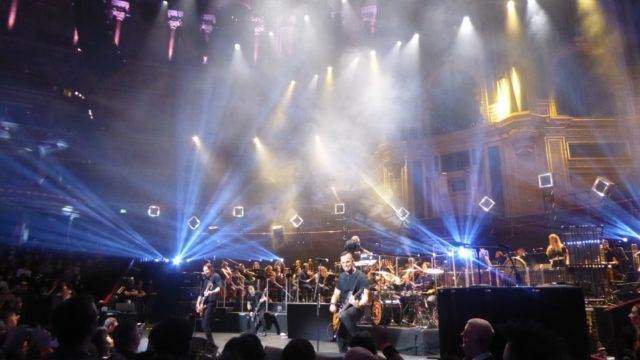 Oh HOW the Alter Bridge Nation (as their fans are called) have waited for this. Ever since it was announced just after Download Festival 2017 (read our chat with AB drummer Scott Phillips on the matter here) that Alter Bridge were going to “do a Metallica” and perform with an orchestra, those lucky enough to have the tickets that sold out in twelve minutes had been counting down the weeks and days to these two very special shows. The Royal Albert Hall in London, the city where Alter Bridge have had so many of their greatest triumphs, was a perfect location, and there was a special buzz about the place long before the 52 piece Parallax Orchestra took their positions.

The show was divided into two acts; the comparably rapid fire first 45 minutes, and the rest of the show (about an hour and 40 minutes) with a 25 minute break sandwiched between. Alter Bridge wasted no time in getting things going with Slip To The Void, but as you’ve never heard it before, the string section of The Parallax Orchestra giving the song even more depth and power than usual. Following that up with an Addicted To Pain supercharged by cellos, a brass section and extra percussion which made one of Alter Bridge’s heaviest songs even more so was the first of several moments that caused a combination of standing ovations and jaws visibly being scraped off of the floor.

The next of these spine tingling moments was to occur when The Parallax Orchestra joined forces with Myles on the intro to Cry Of Achilles; although even that in itself paled to the force added to Brian Marshall’s usual mid song bass solo by the emphatic strings. Things then took an unexpected but very welcome turn with In Loving Memory – the first of many rarities to surface from Alter Bridge’s debut One Day Remains. A super powered Fortress finished off the first part of the evening, leaving everyone begging for more (the band walked off for intermission to a smattering of comedy boos).

Following the intermission, things kicked back off with a sprint through Ties That Bind packing more oomph than ever before, and the spell that was cast over the whole room did not let up for the next hour and forty minutes. The old live combination of Brand New Start and Ghost Of Days Gone By, abandoned in more recent years, was given a very welcome return, with both songs sounding phenomenal (especially Ghost Of Days Gone By, one of the highlights of the whole evening).

Having previously hinted that they would use these special shows to air some of their longer “epics”, Alter Bridge were true to their word; The Last Hero, The End Is Here and a sublime Words Darker Than Their Wings were unleashed one after the other. As with any Alter Bridge show, the acoustic section is one of the highlights. The instrumentation and arrangement by The Parallax Orchestra as they accompanied Myles Kennedy on Wonderful Life and Watch Over You was quite brilliant. It was deliberately understated yet mesmerising, the kind of thing to raise goosebumps on the arms of everyone privileged enough to be there.

Still, there was more to come. This Side Of Fate giving way to Blackbird, the one song everyone in attendance had probably pictured with the orchestra beforehand, and it did not disappoint, with the audience on their feet for at least a minute giving thunderous applause and both Brian Marshall and Myles Kennedy being visibly moved by the reaction. To finish off, there was a double blast from One Day Remains; A soaring Broken Wings, and a rendition of Open Your Eyes that felt like a celebration of all that had gone before it (a special shout out to the violinist in The Parallax Orchestra who was having the time of her life during Myles directing the crowd singalong in the middle part).

Shows like this happen maybe a handful of nights in the lifetime of a band, equally so for music fans. Alter Bridge have had some very special nights in London over the last decade, but nothing like this. This show (and the one the night before) will go down as shows that people will talk about for years to come, the kind of thing you tell your children about that “I was there”. It’s yet another nod to the UK festival powers that be that a major festival headlining slot is surely a case of “when”, not “if” for this band. Seeing Alter Bridge live will never be quite the same again. Now, someone invent a time machine so we can go experience it all over again. 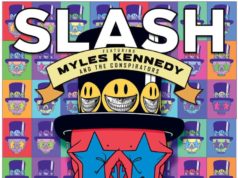