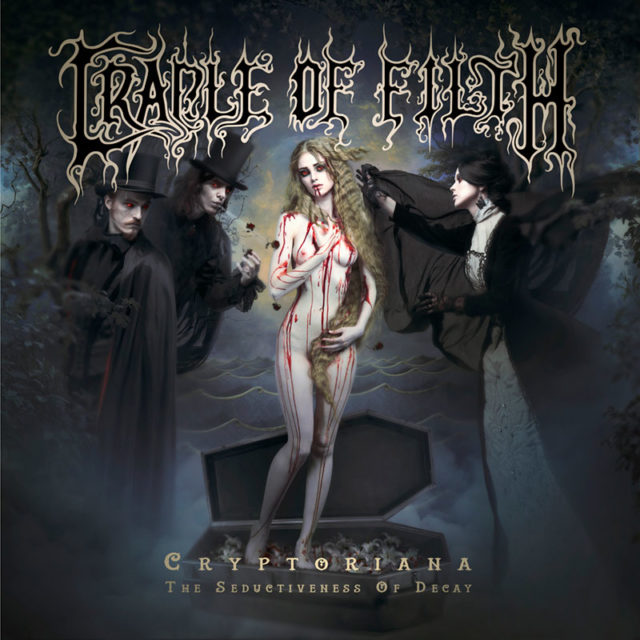 In my personal opinion Cradle of Filth are one of the most underrated and underappreciated bands in metal today. They have been consistently brilliant for the better part of a quarter of a century but still remain overlooked. It is mind-boggling to me, but with that said their latest album Cryptoriana (The Seductiveness of Decay) is yet another gem to add to their crown. While not strictly a concept album, it is heavily influenced by Victoriana and the attraction to death and all of the Gothic trappings therein.

This is a lean album (8 tracks, 10 if you get the special edition) there isn’t an inch of fat on here which really works in its favour. Every song has a chance to really breathe and come to life, making it feel a classic album in every sense. It punches up the riffs but scales back on some of the grandiose moments creating a more straightforward album that really hits the listener in the face.

Heartbreak and Seance, and Achingly Beautiful are archetypal Cradle jams that will please long-term fans that are looking for some more old-school leanings. One thing that has become abundantly clear on this album and previous album Hammer of the Witches is just how much of an asset Lindsay Schoolcraft has become to the band, her vocals and keyboards come leaping out of the speakers and add that extra haunting element that was missing on a few of the bands previous releases, her ear for melody fits perfectly here.

You will know the lion by his claw shows off more of the thrash elements that have been peppered throughout the band’s career in a weird melding of Annihilator meets Carcass while a choir from the Omen comes in during the middle sort of way. Cradle are at their best when they are employing a faster, harder edge to their sound and this is the perfect example of that paying off for them. Speaking of Annihilator, there is a cover of Alison Hell to be found on the deluxe edition of this album which is well worth seeking out, as it somehow manages to make that song not only heavier but also much more frightening than the original.

There is so much to love on this album, whether it’s the more melodic moments or the dual interplay between Dani’s vocals and Lindsay’s which are perfect compliment to each other, the razor-sharp riffs that slice through the gothic melodrama, and the production job which makes the album truly sound big and bombastic. It seems that finally after years of shifting about members that this is a lineup of Cradle where every element works and is bringing out the best in each other to create a second stunning album in a row.

Cryptoriana is pure unfiltered Cradle of Filth and should satisfy fans of all era’s of the band and once again shows just how brilliant they can be and why the metal world still needs them. It’s hard to argue with an album that is this good from top to bottom. While it may not end up becoming everyone’s go to Cradle Of Filth album it is definitely in the top 5 of their career, and with Cradle’s long life as a band, that is saying something.

Cradle Of Filth’s Cryptoriana (The Seductiveness of Decay) is out now on Nuclear Blast Records.