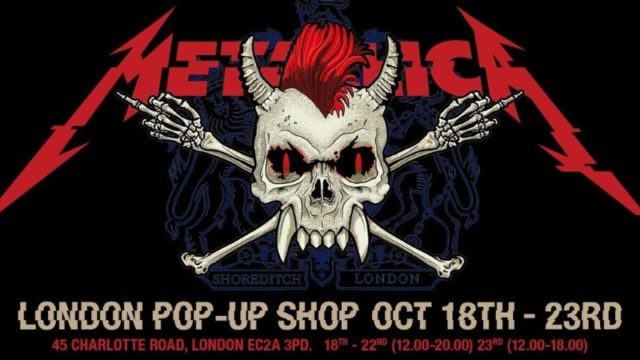 When you’re Metallica, you can pretty much do anything. So the news that Lars, James, Kirk and Rob and their team are launching a pop up shop full of goodies that will no doubt have the ‘Tallica army flocking to spend their money in their hordes isn’t a huge surprise to us.

The pop up shop will be located in Shoreditch, more specifically at 45 Charlotte Road, London, EC2A 3PD. It will open on October 18th through to October 23rd from 12 pm – 8 pm, except for the 23rd when it will be open from 12 pm – 6 pm. Exclusive items that cannot be found anywhere else will be available at the Metallica pop up shop, and there’s always the possibility of bumping into some unexpected people in the store. Who knows, you may even find Lars behind the till himself!

Metallica’s upcoming UK tour has long been sold out. Those lucky enough to have tickets will find them playing the following venues and cities later on in October:

There’s also the small matter of the deluxe re-issue of Master Of Puppets coming out on the 10th of November. Who better to show us what lays inside than James Hetfield himself? Metallica devotees, prepare to enjoy!

Rock Sins will be attending one of the London dates on this tour so stay tuned for maximum Metallica live coverage in just a couple of weeks time!