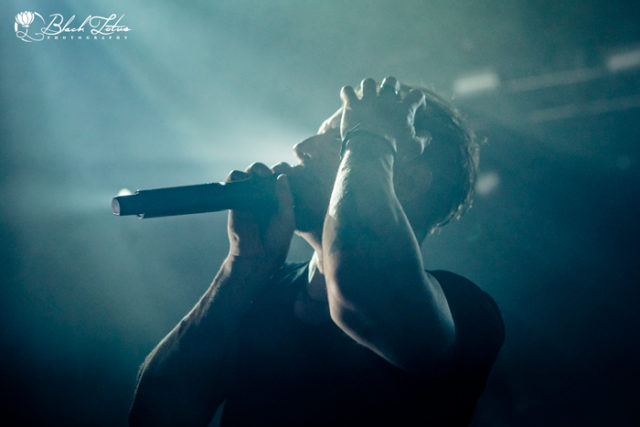 Hours before doors have even opened, a veritable army of fans have made their way from the nearby bars to the doors of Terminal 5. The Yuletide snowfall doesn’t stop anyone from rooting themselves on West 56th in fervent anticipation. The mood is an understandably odd mixture of jubilation and mourning; for those of us lucky enough to be here, it is the final chance to see one of the greatest, dexterous and most inventive group of artists to bless the planet, The Dillinger Escape Plan, and no one is taking this chance for granted. Rabid conversations of setlist speculation echo through the underpass, alongside proud declaration of how many times people have seen the New Jersey giants before tonight.

The second we’re through security there’s a race to the merch table to feast our eyes on some new Dillinger apparel, so sadly most of Daughters’ [4] set is merely background noise. That’s not to say that the band are especially worth watching however; it’s a perfunctory performance that does very little to inspire any extra anticipation for the evening; just a few blokes rattling through a selection of 2006’s Hell Songs and 2010’s self-titled effort. Far from poor by any stretch of the imagination, but seriously lacking in any vigour – and when you’re up against Dillinger and Code Orange, you need a hell of a lot more than passable songs to make yourself stand out.

There’s a strange animosity towards this evening’s main support act. It’s a curious mood; they’re a band with the same ethos as Dillinger, have got to the point of a Grammy nomination purely through hard-work and dominated the world of heavy music in 2017, purely on their own artistic merit. Why on earth people in attendance of Code Orange [6] this evening approach this band with such trepidation is yet to be fully articulated: Surely, it’s not because they’re the “next big thing” – this isn’t a Saxon show where everything new is to be feared and ostracised – and it can’t be because of their macho bravado, as tonight they give a relatively humble performance. Unfortunately, this humility doesn’t quite gel with the music from Forever, and the evening’s set is rather sloppy.
Code Orange are a band usually tighter than Jeremy Hunt’s mental health budget, so it’s starkly apparent from the opening of Real that the machine isn’t in full force. The blood-curdling mosh call of ‘This is real now// Motherfucker’ is devoid of that visceral gut-punch that made it a standout moment on Forever. Their individual stage presence is, as ever, monolithically imposing and captivating in its boundless energy – especially bassist Joe Goldman, arguably the scariest musician to hit the stage since The Great Southern Trendkill era Anselmo. Throughout their set they never put a note wrong and give very little breathing space with their unrelenting intensity, but it feels far more flabby and tired than they have proven themselves to be across the year.

The aforementioned sense of jubilation and mourning is increasing by the second as the 3,000-strong crowd waits with fearful anticipation for The Dillinger Escape Plan’s [10] last ever show. Will this be an evening befitting of their titanic legacy, or is the pressure of finality going to break one of the greatest artistic outfits of all time and leave the event a crushing disappointment?

With the subdued opening of Proceed with Caution from the ’97 self-titled EP, Dillinger maintain their unique approach to music and performance; a band fabled for their chaotic live acts and mind-bogglingly complex instrumentation opening with a relatively straightforward ninety second jam highlights the best of TDEP – they don’t care for anyone’s expectations and will do exactly what they want, but have a sincere reverence for their die-hard fans and treat them to the deep cuts that have never received a live airing. As the piece reaches its climax, the venue is left in total darkness, save for the ever-irritating phones recording every bloody second, before a gleeful voice erupts from the pitch black with one final opening edict: ‘Hey motherfuckers! This is it! This is fuckin’ it! You guys ready? One more fuckin’ time! One. More. Fuckin’ time, get the fuck up here. This song is called Limerent Death!’. Every fibre of every person’s being is coursing with adrenaline as the abrasive strobe lighting gives us a full view of a bone-shatteringly heavy rendition of Dissociation’s opening song. Greg’s voice is at it’s most powerful and least restrained, while the audience screams their breaking hearts back at him.

The setlist is an expertly implemented juxtaposition of iron-clad brutality and emotionally charged fragility; stonewall classics like Sunshine the Werewolf alongside the piano-led Mouth of Ghosts, all delivered with the verve and passion they deserve. Billy Rymer and Liam Wilson prove themselves to be perhaps the most underrated rhythm section of all time with their jaw-dropping precision and flair, while Ben Weinman and Kevin Antreassian both provide impossibly beautiful virtuosity from their various six-stringed instruments.

Original singer for The Dillinger Escape Plan, Dmitri Minakakis, is reluctantly dragged on stage by Greg – though you can tell he is relishing as much as everyone else – to perform a venue demolishing run through of Sandbox Magician from the Under the Running Board EP to hysterical screams of unbridled bliss. During the end of encore closer 43% Burnt, the band embrace one another, visibly tearing up, and anyone whose lip wasn’t trembling was either a sociopath or lying.
The ovation for that finale continued for a good ten minutes, and then a single opening swell of an orchestra provoked the most fervent celebration of the night as SEVEN)SUNS graced the stage to join Dillinger for the first and final performance of Dissociation’s title track. Original bass player Adam Doll joins the band to provide electronic samples and ambience as they deliver the most beautiful and heartfelt onstage performance outside of Architects’ Brixton show after Tom Searle’s passing.

Weeping with celebratory anguish, the room stands stunned after Greg’s final whisper of ‘Finding a way to die alone’. A truly outstanding spectacle and the perfect goodbye. Through tear-filled eyes the international conglomerate in attendance leaves with a cathartic sense of a finality. The Dillinger Escape Plan is no more, but they are not a band that need eulogising as their legacy will outlive all of us. It may be over, but this feels like never-ending.

Proceed with Caution
Limerent Death
Panasonic Youth
Milk Lizard
Baby’s First Coffin
Dead as History
Surrogate
Happiness is a Smile
One of Us is the Killer
Nothing to Forget
Low Feels Blvd.
Mouth of Ghosts
Unretrofied
Sandbox Magician (with Dmitri Minakakis)
When I Lost My Bet
Sunshine the Werewolf