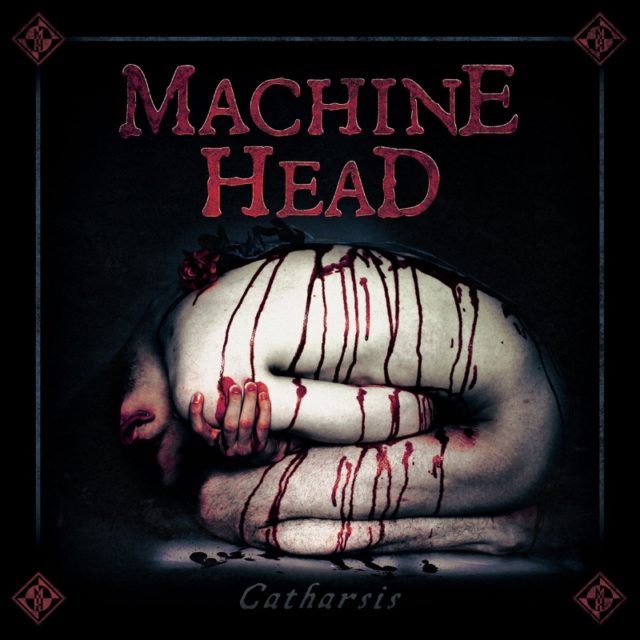 Ah Machine Head. Robb Flynn and co have been on quite the journey over the last ten years, ever since releasing their magnum opus of The Blackening. Their most recent album Bloodstone & Diamonds contained some great songs but couldn’t quite escape the feeling that what was a good album should have been a great album if the band had been able to self-edit a bit more and make the album a bit shorter. Having teased parts of their new album Catharsis over the last couple of months, it was going to be very interesting to see what path they had taken with their new record.

Catharsis comes ripping out of the blocks with the opening Violate. From Robb Flynn’s cry of “Ooooh Fuck The World!” to the riffs peppered throughout to Flynn’s rapid and aggressive vocals, this is Machine Head at their best. It may not be quite the epic-length album opener of records past, but as an example of a shorter, leaner Machine Head song, it’s everything one would want from them. The two singles, the album’s title track and Beyond The Pale continue the strong opening to Catharsis with the former’s breakdown and solo noteworthy enough to overlook a slightly weak chorus. Meanwhile, Beyond The Pale has an almost nu-metal-esque stomp running throughout and evokes memories of songs like Bulldozer and others from the much (unfairly) maligned Supercharger era.

After a strong start, it is at this point that history repeats itself from previous album Bloodstone and Diamonds and things begin to go south. Songs like California Bleeding and the clap happy Kaleidoscope are “Machine Head does thrash by numbers”, perfectly acceptable songs but ones that wouldn’t get near a top 40 of songs written by the band across their back catalogue. They are positively stunning however in comparison to Triple Beam, which is a definite candidate for one of Machine Head’s worst songs from a lyrical perspective.

Much has been written elsewhere already about the controversial “Bastards” and some of the language used within. It was always going to stir up controversy, but it genuinely seems to have been done with good intentions at heart. That aside, the song is the most interesting thing on the album, going from Dropkick Murphy’s style folk-punk to fully raging more traditional Machine Head in the space of about three minutes. It will be a live experience for sure if the band decide to include it in their setlist on upcoming tours.

Beyond Bastards, the album threatens to veer fully off course until Behind The Mask, an acoustic tale with a repeating refrain that evokes memories of areas of suspense from video games of years gone by. Robb’s vocals in this song begin in a deliberately understated fashion, and all the better for it, before displaying the power of his range in the final third of the track. Like Bastards, it is something a bit different from Machine Head and it is good to see them trying new things.

The last few tracks of the album are largely forgettable, with Heavy Lies The Crown in particular getting nowhere near the standard of past Machine Head epic length songs. Razorblade Smile, the tribute to Lemmy Kilmister is both great and disappointing at the same time, combining some great riff work with lyrics that are again far from Machine Head’s best. The album closing Eulogy is reminiscent of Sail Into The Black from Bloodstone and Diamonds in it’s approach, and like its counterpart, it is a slightly unfulfilling listen, ending the album on something of a flat note.

Catharsis overall is quite an unfocused album, having evolved that way quite organically judging by recent interviews Robb has given. This is both a benefit and a hindrance, as the attempts to try new things or new approaches to songs (Bastards, Behind The Mask) are largely successful. On the negative side, the seeming lack of focus has led to the creation of an album which is at least five tracks too long and of hugely varying quality like its predecessor. There’s certainly worthwhile listening here, but given what Machine Head are capable of at their best, it’s hard not to be a little disappointed.