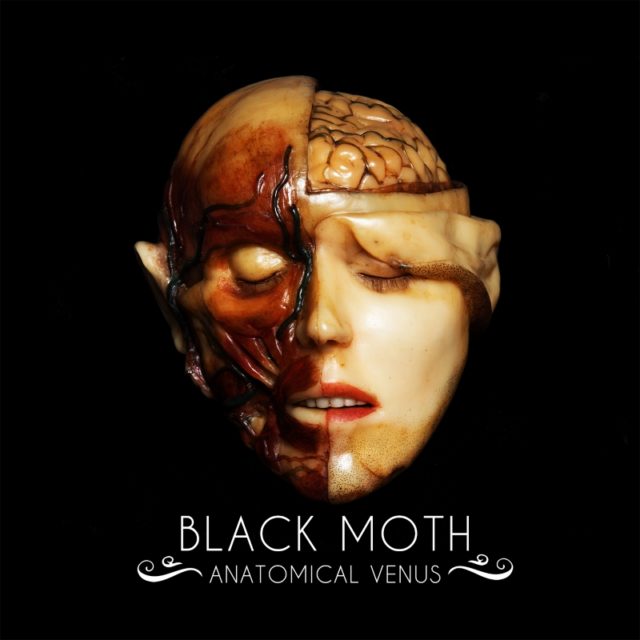 2018 is promising to be an incredibly big year for Black Moth. Hotly tipped from all corners of the industry to make a real impact over the next 12 months, the Leeds quintet are looking to take the first step to fulfilling their undoubted potential with new record ‘Anatomical Venus’, and what a first step it is.

This is one of those glorious records that demands your attention simply due to how phenomenal it is, with each and every listen unveiling another winding corridor of brilliance that was somehow hidden upon your first listen. There’s a real stomp that is very rarely pulled off to this standard, with the constant, thudding drumbeat providing the perfect platform for some understated yet searing riffs. The riffs midway through both ‘Buried Hoards’ and ‘Screen Queen’ in particular are complete face melters, and bring a real sense of fun in amongst the extended bouts of meandering melancholy that form the bedrock of the record.

There’s a doomy, stoner vibe that runs throughout the record that helps to give a sense of atmospheric despair, while at the same time remaining seductively alluring due to the stunning vocals of Harriet Hyde that manage to soar above the maelstrom of noise being created by the rest of the band. The drums of Dom McCready are seemingly content to consistently take the back seat (no pun intended), yet they act as both the driving force and the beating heart of the album.

While this record is best enjoyed as the eclectic work of art that it was designed to be, there are some wonderful individual moments scattered throughout that form the pieces of the masterful jigsaw. ‘A Lovers Hate’ is a chunk of sleazy, slamming hard rock that sounds like a 70’s throwback while still being crisp and completely modern, while ‘Sisters of the Stone’ really shows Black Moth spreading their wings for the first time, allowing each component to shine before bringing it all together for some phenomenal sweeping passages.

‘A Thousand Arrows’ see’s the band at their most adventurous and their most thunderous, slamming their collective feet on the accelerator to create a real anthem that would be perfectly suited for the very grandest of stages. Final track ‘Pig Man’ takes proceedings in a dirtier, sleazier direction, with a chorus that comes straight out of the Alice in Chains playbook and a closing stampede that wouldn’t be out of place on a thrash record.

Despite the frantic end, the majority of the record revels in a slow pace that has a smorgasbord of styles from which to choose from and play with, from old school psychedelia and grunge to Electric Wizard-esque sludge. This is the kind of music that bands such as The Pretty Reckless wish they could make, and it would be a staggering injustice if this group of talented individuals don’t reach similar heights in terms of their popularity with such an incredible release now in their back catalogue.

Black Moth are practically impossible to pigeonhole and that’s what makes them such a riveting and impressive prospect. The most exciting thing is that ‘Anatomical Venus’ doesn’t even sound like a band at the peak of their powers. Their mesh of styles will allow for one hell of a creative licence on future releases, and the dexterity of Hyde’s vocals, not to mention the quality of the band behind her, should mean that the quality will be sky high regardless of the direction that they decide to take. Whether you’ve been a fan for a while or have never heard of Black Moth until now, you’ll definitely want to be part of the journey from this point on…

‘Anatomical Venus’ is out on February 23rd via Spinefarm Records.