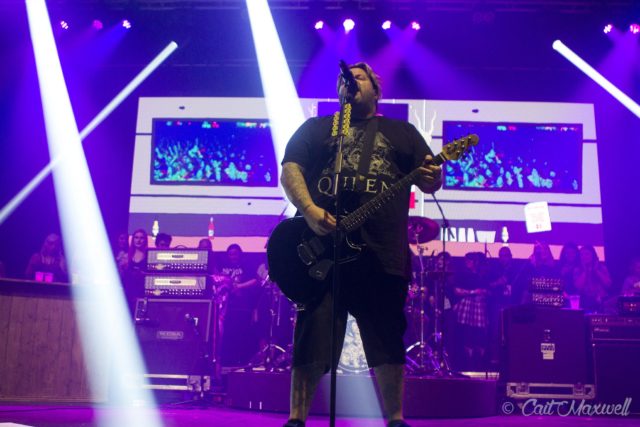 If you were a fan of pop-punk back in the mid-2000’s, then chances are you might remember the Get Happy Tour – a package fronted by Texas rockers Bowling For Soup and featuring the likes of Son Of Dork, Wheatus, The Bloodhound Gang and more as supports during its first couple of incarnations. The trek was immensely popular at the time, and proved a major step in breaking some of its bands on these shores. Now, ten years on, Bowling For Soup have resurrected the name, and they’ve brought another stellar bill to go with it. We caught up with the tour in Manchester to see what things would sound like ten years on.

Tonight’s openers, California sextet Army Of Freshmen (8), were one of the acts on that original incarnation of the tour, and immediately set about proving that they’re still just as entertaining with a fun set of up-tempo anthems that serve as a great appetiser for what’s to come across the evening. The likes of 10,000 Years and Waiting On Me more than illustrate the band’s skill in crafting catchy hooks, and their on-stage antics and infectious enthusiasm are easily enough to win tonight’s audience over within moments of their arrival, as frontman Chris Jay quickly proves his ability to belt out masterful power-pop choruses with apparent ease. They might not have too long a set on this particular occasion, but by the time they leave the stage tonight, it’s easy to see why Army Of Freshmen were chosen to be brought back to Get Happy one more time.

It’s hard to fully sum up exactly what tonight’s main support, The Aquabats (9), even are in terms of a follow-up act. Indeed, if you were to arrive to their set mid-way through, it’s entirely possible you’d see the five members of the band in their identical blue spandex uniforms and probably begin questioning your own sanity. Put into simple terms, The Aquabats are perhaps best described as a fusion of late 90’s ska, pop-punk and new-wave, crossed with Weird Al Yankovic-esque humour and an industrial-sized sprinkling of chaotic fun. With a wide range of song subjects ranging from genetic experiments gone wrong (Cat with 2 Heads!), to rescuing people from marauding sharks (Shark Fighter!), to doing science (the very literally-named Doing Science!), the band have an undeniably brilliant tongue-in-cheek nature to their performance. It’s all underpinned by genuine musical talent though thankfully, as frontman The M.C. Bat Commander leads the now-packed O2 Apollo through this wacky circus of entertainment with glee.

Inflatable pizza slices are brought out for Pizza Party! and a young costumed fan is promptly brought onstage for a quick crowdsurf to the back of the room as hundreds cheer him on. Not long after that, a Queen-singing villain named Breaddy Mercury is ‘defeated’ by being pelted with what seems to be an entire loaf of Hovis. By the time the band eventually close things off with Pool Party! (complete with even more inflatables), there doesn’t appear to be a single person in the room who isn’t grinning at the sheer lunacy of what they’ve just seen. It may have been five years or so since The Aquabats last played these shores before this run, but if anything, this has surely proven the desire to see them return.

Any other band you’d think would likely struggle against such a strong showing, but luckily Bowling For Soup (10) are far from being just any other band. Playing to a packed-out room in what the band frequently refers to as their “favourite place to play anywhere in the world” in one of their biggest headline shows in said city for many years, Jaret Reddick and co. are borderline-unstoppable tonight from the second they step onto the stage until the final moments they leave. Of course, there’s also the small matter of the band playing their beloved fourth album, Drunk Enough To Dance, in its entirety to celebrate having hit its 16th birthday in 2018. That of course means hearing the likes of Emily and smash-hit single Girl All The Bad Guys Want far earlier than expected in a typical BFS set, but also deeper cuts like The Hard Way, Scaring Myself and Self-Centered being played for only about the seventh time ever since they were recorded over a decade ago, alongside tracks that, whilst not as rare, still rarely crop up in the band’s usual sets like Running From Your Dad and I Don’t Wanna Rock.

As is now basically the expected norm from Bowling For Soup shows, the band are on excellent form for the entirety of the show too – their usual quick-witted humour and innate ability to play off of an audience proving delightfully entertaining across a mammoth two-hour headline set that not once dips in quality. Of course, big shows demand bigger production, and on this occasion the band are packing both a large screen behind them, a rotating drumkit for Gary Wiseman and both CO2 and pyro cannons, which comically fail mid-show on the side of bassist Erik Chandler, much to the amusement of his bandmates. There’s also the small matter of a small horde of VIP fans crowding the rear of the stage tonight, the lucky punters getting to drink and interact with their heroes throughout the evening and providing clearly visible evidence of just how beloved Bowling For Soup are on these shores.

Naturally, this being a BFS show, there’s also loads of the expected funny moments throughout their show tonight, including their infamous ‘Beer Enhanced Photo Opportunity’ and a quick blast of “the theme song to the greatest cartoon in the world” (Today Is Gonna Be A Great Day from Disney’s Phineas & Ferb), but tonight’s real highlight is just how tight the band sound on all of the songs they play. At several points across the evening, the band even make reference to “anyone just waiting to hear 1985”, jokingly illustrating their point with a comically-large countdown clock that changes on multiple occasions, so when the time comes for their final song of the evening and the band begin the iconic intro riff, there’s absolute jubilant pandemonium across the whole venue. Tonight may have been about celebrating the brilliant past of Bowling For Soup, but from the amount of love on display in the O2 Apollo tonight, it’s the future that fans should likely be very, very excited about indeed.

You can also check out our exclusive Bowling For Soup photo gallery from the night’s action courtesy of Cait Maxwell!