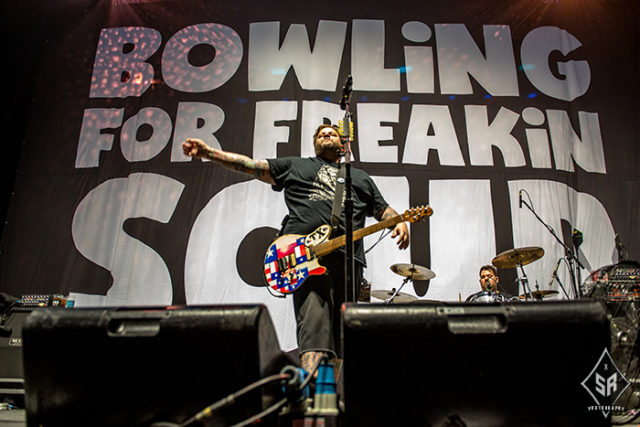 Bowling For Soup’s biggest ever UK tour – The Get Happy Tour 2018 is now underway! Having kicked off on Friday (9th Feb 2018) in Glasgow, the tour heads across the UK before finishing up in London at Brixton Academy on Saturday (17th Feb).

Now, Jaret, Erik, Chris and Gary have announced plans to film a brand new Live DVD – Older, Fatter, Still The Greatest” at the tour closing Brixton show. The Get Happy Tour sees Bowling For Soup playing their 2002 breakthrough album Drunk Enough To Dance in it’s entirety plus a selection of their other hits like 1985 and High School Never Ends, along with all the hilarity that one comes to expect from a Bowling For Soup live show.

This will be Bowling For Soup’s first full band live DVD since “Live and Very Attractive”, which was filmed the last time BFS played Brixton Academy in 2007. Their most recent DVD, Acoustic In A Freakin’ English Church, was filmed at London’s Union Chapel in 2013 and just featured frontman Jaret Reddick and bassist Erik Chandler, as has always been the case when Bowling For Soup go acoustic.