We’ve made it into February and it’s finally time for our first video of the week contest for 2018. As we haven’t had a contest since the year ending “video of 2017” contest won by Youth Killed It with their track Popstar, we’ve got a bumper edition this time with seven videos vying for your attention. Bands of all nationalities, shapes and sizes will do battle for your votes.

Kicking off this week celebrating their 35th anniversary as a band are none other than thrash metal icons Megadeth with arguably the strongest song from their album Dystopia, the excellent Lying In State. The video sees the band’s mascot Vic Rattlehead come to life in a typically macabre affair, while the likes of the Daves Mustaine and Ellefson shred away on one of Megadeth’s best songs since their comeback over a decade ago.

Supposedly hailing from the planet LV-426 ACHERON, there are few bands out there like Sick N’ Beautiful, who could easily be described as the bastard offspring of Rob Zombie and Katy Perry. Their brand new video for single Megalomaniacal is a typically colourful, vibrant affair, and is best seen rather than described, so, enough from us, go check it out!

Next up this time contending for video of the week are Temples On Mars with their new single So In Love With Your Own Drug. As one may expect with a band named like Temples On Mars, the video is quite trippy in places, but the song is enormously catchy with the chorus being a huge earworm. Their debut album is released in April, so keep your eyes open for that.

Dark, grim and heavier than a Sledgehammer, Liverpool natives God Complex are next up with their second single Insignificant. Taken from their debut EP (release details tbc), this is a sub 1 minute 30 blast of extreme British metal so fierce it’ll knock the hair clean off your scalp. Watch and listen, if you dare.

Following on from the excellent video to their even more excellent single Judas, the HUGE ROCK STARS of Fozzy continue to impress in the visual department with the video for their new single Painless. One of the more impressive tracks on their latest album (also called Judas), this is a video for the traditional rock and metal fans out there, and one that could easily see Fozzy crowned video of the week.

Back to the home grown talent and the excellent new single, In This Hell, from hotly tipped Welsh outfit Dream State. With a video that has something of an olde-worldy feeling, it’s a complete contrast from the song that sounds vibrant, fresh and utterly captivating. Listeners will be scrambling for the repeat button over and over again.

Last up this week, UK hardcore mob Palm Reader are back with a vengeance with the first single, Swarm, from their upcoming third album. The video sees the band giving one of the performances of their lives – inside an abandoned location. Their new album drops on the 6th of April, and could be THE hardcore release of the year if their previous efforts are anything to go by.

Voting for this video of the week contest closes at Midday UK time on Thursday 8th of February. Only one can win so get voting now!!

Temples On Mars – So In Love With Your Own Drug

Dream State – In This Hell 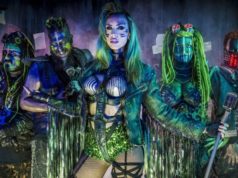