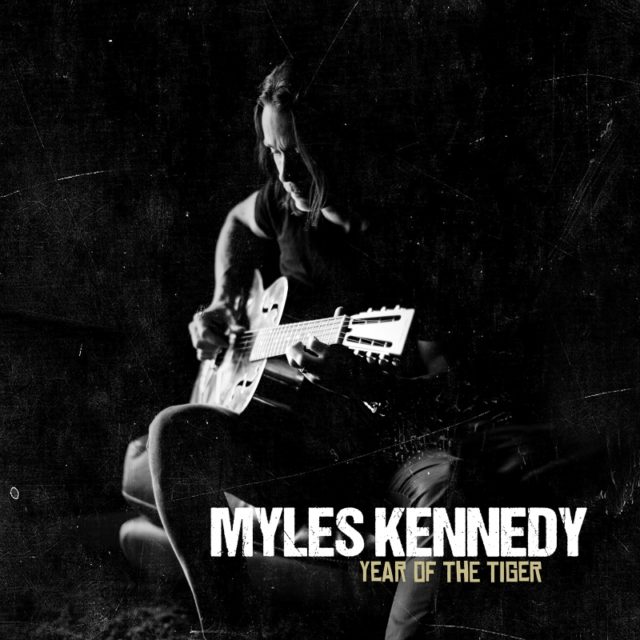 Overall Score: 10/10 Songwriting: 10/10 Vocals: 10/10 Consistency: 10/10 Pros: Stunning vocal performance throughout | An impressive whole new side to Kennedy’s musical output Cons: May take time to get into for some listeners

When your day job involves packing out arenas and festivals alongside the likes of Alter Bridge and Slash, putting out a deeply personal mostly-acoustic album inspired by classic blues and country music might sound like a bit of a stretch, but that’s exactly what Myles Kennedy has come up with. Rumours of the frontman actually putting out a solo record have been around for a number of years now, however 2018 is the year we finally get to hear exactly what Myles Kennedy can do, as he puts out Year of the Tiger – a somewhat autobiographical record about loss and how to deal with it.

From the second that title track Year of the Tiger starts things off with jangly acoustic guitars and a thumping bass drum beat, it’s obvious that this is an incredibly different side of the man who brought us the likes of Metalingus and Isolation. Of course, Kennedy’s soaring vocals remain front and centre, but here they’re somehow of a far more soothing tone than is sometimes the case in his other bands, as he croons his way through a hauntingly affecting vocal that really sets the stage for an album that’s quite unlike anything else he’s ever put his name to.

Across its 50 minute or so runtime, Year of the Tiger goes on to encompass not only more of these jaunty up-beat affairs (Ghost of Shangri La, Haunted by Design, Songbird) but also a smattering of more low-key and mournful-sounding songs that really serve to highlight the versatility of Kennedy’s voice. Whether he’s belting his way through an earworm of a chorus on the gospel-like Devil On The Wall, or crooning softly against some impressive harmonies on Turning Stones, there really isn’t a single dull moment anywhere on this entire album. The Great Unknown even goes as far as utilising a string arrangement that elevates an already-emotional piece to new heights and brings an almost apocalyptic feel to the table.

Probably the most poignant moment on the record though, comes on ballad Love Can Only Heal – a stunningly uplifting affair that easily ranks alongside Alter Bridge fan-favourite Watch Over You as one of the greatest vocal performances of Kennedy’s career. Mostly consisting of a sole acoustic riff, the track gradually builds and builds before eventually culminating in a spine-chillingly beautiful chorus that simply begs to be played live for all time as Kennedy implores the listener “Don’t be afraid to feel/Cause love can only heal”.

Closing things off, One Fine Day again sets off at a somewhat leisurely pace before eventually finding a more brisk rhythm. Essentially seeming to depict Kennedy’s now contentedness with the personal pains explored on the record, it’s also home to one of its most thought provoking lyrics. “Through our tragedies we find out who we are”, he sings, and that’s really the most important message that one could probably take away from Year of the Tiger.

Overall, there’s such a rich tapestry of musical brilliance on display here that’s simply undeniable, and although fans of Kennedy’s heavier work elsewhere might initially struggle to adapt to the bluesy country tones of Year of the Tiger, they’ll likely eventually find the merits of persevering with it, as repeated listens reveal new layers to the masterfully-crafted songs. In seeking out a cathartic release from his past, Myles Kennedy has not only crafted a likely Album of the Year candidate, but also perhaps the strongest release he’s ever put his name to, which is obviously no mean feat.

Year Of The Tiger is out now on Napalm Records.