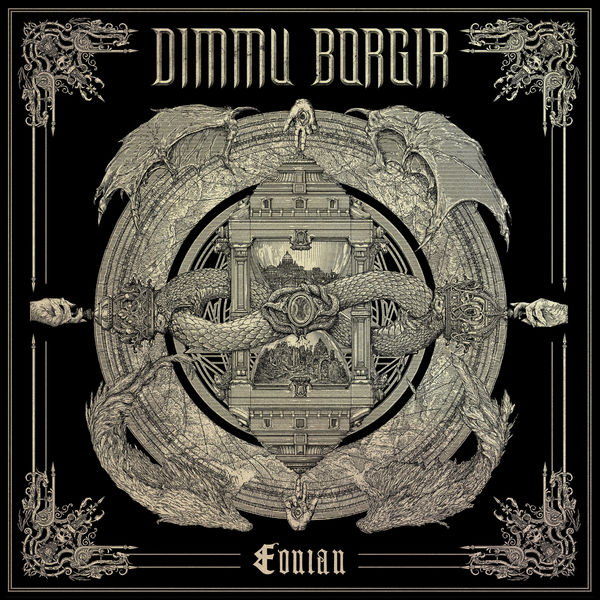 Overall Score: 5/10 Songs: 5/10 Orchestration: 7/10 Replay Value: 4/10 Pros: Some of the orchestration brings it to life Cons: mostly dull and uninspired

It’s been 8 years since Dimmu Borgir last released an album. The landscape of metal and extreme metal especially has changed considerably. Anticipation was undeniably high for new music from Dimmu, but it is hard to know at this stage if that anticipation was justified.

Eonian, will, without doubt, be a divisive album among fans, depending on which side of the fence you sit on. Fans expecting a black metal album with an extreme edge may want to look elsewhere, but fans of the band’s more melodic symphonic leanings will be very happy.

This is an album that purposely and gleefully leans into the grandiose, this is a dark opera that has very little in the way of metal running through it. The lead single Interdimensional Summit lets you know what you are in for. The reaction to that song alone was enough to break the internet. It’s very catchy, flamboyant and over the top, there’s sinister keys, dark choral vocals and Shaggrath doing his best possessed by a demon voice.

Aetheric sounds like Cradle of Filth at their most bombastic and overblown. It flows perfectly and has a really haunting 70’s occult horror vibe to do it, driven mainly by the choir and backing vocals that will haunt you for a while after hearing it. Lightbringer brings the metal and has a razor-sharp riff that runs through it and is without a doubt the heaviest track on the album, perhaps the biggest callback to the Dimmu of old.

Eonian is an album that will either grow on you over time or will alienate you from the get-go, with the main issues situating around the songwriting and the production. There are moments here where songs can start to blend into one, and there is very little to seperate them, with an overriding feeling of a distinct lack of good ideas here. The main focus seems to be to just through in enough symphonic elements that the songs sound huge. The orchestration is really what saves part of this album because when they lean into it, they really commit to it and there are some huge moments on here. Catchy, evocative and haunting, but with that said, it still doesn’t make up for how largely uninteresting the rest of the songs are around those parts.

The production similarly is all over the place, the vocals and orchestration soar above everything else because that is where the focus and emphasis have been placed. The guitars and rhythm section has been stiffed and kept low in the mix, to the point I can’t even tell if the band turned up for the recording sessions in some places, which is a real shame when you consider what Dimmu have brought us in the past. It’s just baffling when you can see what they have tried to accomplish. There is clearly an intention here from Dimmu Borgir to make an album that sounds epic, and more than anything it comes across muddled and confused.

Eonian is a lukewarm addition to the legacy of a band who reached legendary status a long time ago. This is the sound of a band sleepwalking through an album that seems to be mostly directionless with the odd spike of something interesting peppered throughout. As previously said in this review, this is an album that will be sure to divide opinion and that will, unfortunately, the most interesting thing that comes from it.

Eonian is released tomorrow (May 4th 2018) through Nuclear Blast Records.