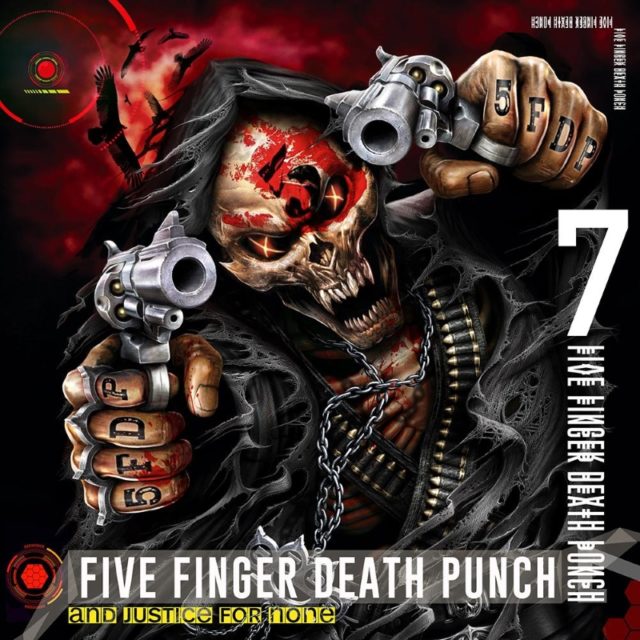 Before getting into the nuts and bolts of Five Finger Death Punch’s seventh studio album, And Justice For None, some context is required. The album was recorded roughly eighteen months ago, with a dispute with the band’s old label holding up the album’s release until now. At the time And Justice For None was recorded, Five Finger Death Punch were in a state of turmoil, with frontman Ivan Moody between stays in rehab and the band having had to use the services of All That Remains Phil Labonte to finish off a US tour prior to the recording.

It is probably little wonder that as a result, And Justice For None is probably the most disjointed album of Five Finger Death Punch’s career so far. You know roughly what you’re going to get from a Five Finger Death Punch album; There will be the big ballads, a couple of tracks with Ivan rapping, a couple of fast heavy tracks and some more mid tempo hard rock / metal tracks that will undoubtedly play very well on US rock radio. All of those expected elements are here, but it feels like more than ever, they are sticking to their formula with an increasing rigidness. Which in itself isn’t a problem if the songs are good enough, but this time on the whole, they’re not.

The album starts promisingly enough. Fake is a typical FFDP album opener, with Ivan in growling mode and some gratuitous F-bombs all over the place but it does what you’d want a Death Punch album opening track to do and you can imagine it being a lot of fun live. Top Of The World is an OK follow on, although the chorus feels forced and detracts from other good points in the track. Then we come to Sham Pain, which depending on your personal point of view is either a great song, or possibly the worst thing Five Finger Death Punch have ever put their name to, and in this reviewer’s view, it’s the latter. A track effectively mocking the band’s fans and talking about hating playing shows (amongst other things, the TMZ jab is somewhat justified) is something one might expect from Falling In Reverse, not Five Finger Death Punch. Given when this album was written, it adds up, and one can only imagine the band’s management and label thought the attention the song would get would be worth including it (we’re writing about it so I guess it’s working). The track can’t even be saved by the ridiculous music video, which is over the top, even for FFDP.

While Sham Pain is worthy of criticism in this reviewer’s view, at least it is worth talking about. There is very little in the next ten tracks to get either excited about or to criticise, which in itself is both a disappointment and a big problem. The likes of Blue On Black and I Refuse come nowhere near the best ballads of Five Finger Death Punch such as Remember Everything or Battle Born. The heavier tracks like Rock Bottom suffer much the same problem, with riffs that feel like we’ve heard them before (especially in Rock Bottom, which sounds like it has recycled at least one previously used FFDP riff) and a lack of the hooks that the Death Punch usually do so well. Generally the less said about the cover of The Offspring’s Gone Away the better.

Having consistently put out quality albums in the first half of their career, peaking with Wrong Side Of Heaven Volume One, Five Finger Death Punch are now in a dangerous place. Their popularity seems no signs of slowing down, but their recorded output has been gradually decreasing in quality over the last couple of albums, and And Justice For None has continued the downturn. With Ivan Moody seemingly fit, healthy and over his demons, at least for now, here’s hoping they can return to form next time. Given the circumstances in which this album was created, the end result is not surprising, but disappointing nevertheless.

And Justice For None is released Friday May 18th 2018 through Eleven Seven Music.