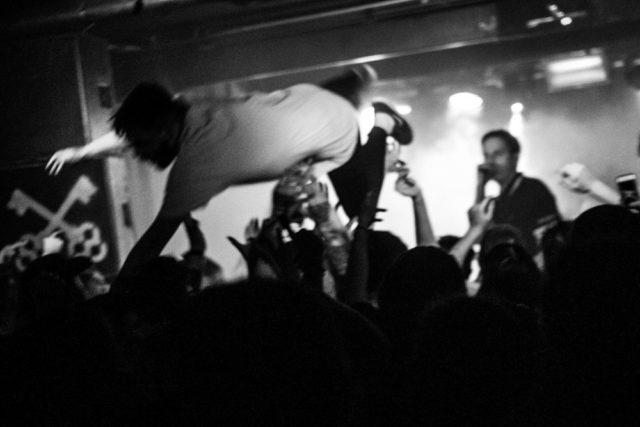 Making their way to the UK for their very first time this month were Californian four-piece Movements. Joining them tonight was Pærish and Muskets as they stopped off at The Key Club in Leeds.

Opening up proceedings tonight are Brighton’s Muskets (7). Being the first band on stage every night is certainly no easy task, and this is the position Muskets have found themselves in tonight. The band rise to it and smash out a set that is clearly received well by the crowd and warms them up for the headliners. Their set is full of bouncy riffs, catchy melodies and punchy drums that all blend together wonderfully throughout, at times putting out an emo, almost shoegaze feel before seamlessly going to sounding more like a punk band. The new tracks from their latest release Chew sound great, with a particular highlight being “17 Years”. If the rest of their performances on this tour have been anything similar to tonight’s, they’ll be packing out these venues on their own in no time.

Next to take to the stage and probably the most anticipated by yours truly due to their spectacular debut album (seriously, listen to Semi-Finalists, you will not regret it) in 2016 are Pærish (9) from Paris. Whilst it seemed like Pærish were the more unknown support act of the night, it seemed like they certainly turned more than a few heads with their performance. For the most part their set is energetic and exciting with songs like ‘Then People Forget’ and ‘Winona Ryder’ getting the audience much lively. So many of their songs have big crescendos that sound beautiful and feel like they would go down an absolute treat in larger venues. Songs like ‘Undone’ and ‘Party’s Over, Biff’ slow things down a bit but still sound huge and catchy as hell. Here’s hoping that Pærish are given more opportunities to be put in front of bigger audiences, because truth be told, they’re writing music ten times better than most bands in their genre right now.

Movements (8)have been a very hot band recently, even more so with last years release of their debut album, Feel Something. This is their first ever UK tour, headline or otherwise, which is quite impressive considering how packed the room is by the time they take to the stage. The crowd are ravenous as they open with ‘Full Circle’, by which point I’m already fearing for my camera’s life due to the people trying to jump on top of it. Two songs in and frontman Patrick Miranda tells us that this is already one of the best shows on the tour, with a genuine look of disbelief on his face that there are this many people on the other side of the world losing their shit to his music, a sentiment that is echoed throughout the night. This look of disbelief is quickly changed to a look of confusion as the inevitable “YOOOORKSHIRE” chants start. The band play a very tight set with the majority of Feel Something making its way into the setlist. The cheers from the crowd are deafening when the opening to ‘Colorblind’ starts and leads to one of the bigger sing-alongs of the night and is coupled nicely with the emotion in Miranda’s voice as he sings. The bands wrap up the night with ‘Daylily’ before thanking everyone for coming to see them. We’ve only scratched the surface with Movements at the moment, this is where they are after one debut and having never supported a band in the UK prior to this. Movements are going to be big, it’s just a question of how soon?

You can also check out our exclusive photos from the night’s action below!