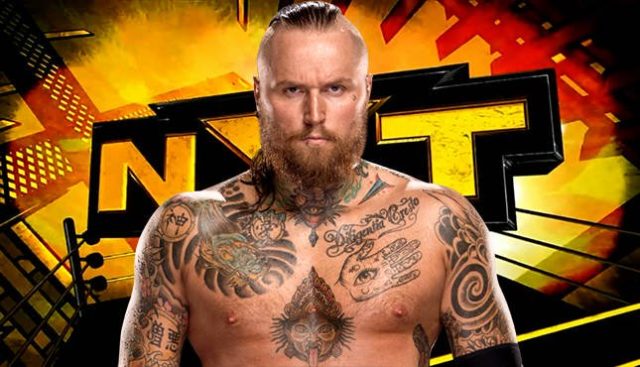 In the Rock Sins office, there are a few of us who go a little mad for some wrestling, especially when it’s combined with our beloved rock music. Whether it’s starting ‘Delete!’ chants at Trivium shows, marking out to Chris Jericho putting everyone on the list at Download Festival, or showing our respect as the likes of Code Orange, Cane Hill and Lzzy Hale do their things at NXT Takeover specials, we freely admit something takes over us when the graps are involved.

It comes as no surprise that Current NXT Champion and all-around metal loving badass Aleister Black is a keen favourite of a lot of us. Whether he is cutting promos surrounded by nothing but candles in the darkness, or rising from a coffin and having Code Orange as a backing band, to simply delivering the mother of all finishers in the Black Mass, the man is metal personified. So it was a real privilege we were able to get a chat with him to discuss being on the road, how he feels being the face of NXT, his theme music and lifestyle and of course how he feels about returning to Download Festival next month with NXT.

Firstly I want to congratulate you on becoming the NXT champion. It’s been a long time coming.

Aleister: Thank you very much.

Now that you have become champion, you have now become the face of the brand. How well are you taking that responsibility?

Aleister: Very well (laughs) It’s a responsibility, but it’s something that I accept and it’s something that I knew once I won this belt. I never get complacent with anything. I remember walking backstage and going through the curtain and being congratulated by everyone, but the last thing on my mind is ‘we’ve reached the top of the mountain..its an easy ride from here’. The first thing right away was, the work has just started. I don’t take anything I do within the company for granted and there’s always going to be hard work whether you’re a champion or not. Carrying a brand, especially the third brand of such a huge company such as WWE, and carrying the belt that’s a huge thing, that’s a huge deal. I am more than capable of doing so, but the work is never done and it makes me want to work harder.

If you aren’t looking to be the hardest working guy in the room, then really what is the point?

You were also at a live event yesterday in Liverpool with the touring guys from the main roster.

Aleister: Yes, that’s correct, I am doing the same tonight.

How does that feel for you being on an international tour with the main roster guys away from your NXT home?

Aleister: It’s a huge thing. You’re in with all these people who are such incredible performers, these incredible wrestlers. Guys that are at the top of the world and the top of their game, and you’re being thrown in there and it’s like ‘Alright, survive’ so I’m being thrown in with the lions to see if I’m a lion myself. It’s an incredible experience and it’s very humbling. It makes me even more focused on doing right by the company with the belt I’m carrying and the brand I’m carrying and incredibly excited for when the time comes for me to truly move up myself and I get to work with all these fantastic professionals.

How have the crowd responded to you on this tour?

Aleister: Very well. I was surprised because NXT is a brand that I won’t say is a niche brand but it’s definitely a brand that has a different set of followers to a lot of the main roster that the mainstream fans follow. It’s been good, we’ve been getting NXT chants, even during the matches they are with us every step of the way, so it’s been validation for how worldwide recognised as a brand NXT is and as a performer that people know me which is a very good thing for me.

For the rest of us, we will have to wait a little bit longer to see you when you return to the Download Festival next month with NXT. Last year was your first time performing there, are you looking forward to coming back?

NXT at Download is still a fairly new idea. When you first found out you were going to be performing at a music festival how did you respond?

Aleister: Music is such a big part of my life. I think being a pro wrestler is somewhere in lacking the musical skills to be a rockstar, that’s why I’m a wrestler if that makes any sense. The two go hand in hand so well, wrestling and music are two things that have such similarities. We’re a touring rock band really, and it’s unreal how cool it is as some kid from Amsterdam that grew up with Black Metal and in the hardcore scenes of Amsterdam and the Netherlands that I get to do something as cool as the Download Festival where you get to see so many of your favourite bands and you get to discover new music, as well as getting to represent NXT there as well. It’s a trip man, in the best kind of way.

It’s not the type of show that you are used to putting on. What challenges come with performing at a Festival?

Aleister: Honestly nothing. There are no challenges going out there because the majority of the NXT fanbase are just kids who love going to metal shows, who love the same things I/We love and that’s why it works so well. If anything it makes my profession so much easier, because it’s good vibes, good energy and everyone is there to have a really good time and watch some really good wrestling. Some of the best wrestling in the world I might add.

Last year you got to introduce Code Orange onstage for their set which was awesome. How did that come about?

Aleister: I think it was a mutual thing. I think I mentioned Code Orange to the talent crew for WWE and they were like ‘Would you want to meet them?’ and I was like ‘You’re damn right I do’ and funnily enough Jami (Morgan) the drummer and singer for Code Orange is a huge wrestling fan and he used to come watch me in a company called EVOLVE and he was a big, and when he saw me he was like ‘I’m so stoked you’re here, and I’m stoked that you’re going to be doing this and you are going to announce us’. Like I said music and wrestling is a perfect collaboration and the perfect mix of things and it shows, when we do stuff like this. I would like to think the thing we did at Download led to them playing me out at NXT Takeover in Brooklyn.

I know when we were putting our piece together for the ten reasons to see NXT at Download, number one was because the current champion is a huge metalhead. Do you think that you offer some crossover appeal? Because there may be some people who are unfamiliar with NXT and wrestling in general but then they see you and they see someone who is like them and it draws them in?

Aleister: 100% when I came up with the character of Aleister Black I didn’t really come up with one because Aleister Black is me. There is a lot in that character that resonates with how I grew up, how my life has been, how my patterns of thinking are. I think a lot of kids, especially people at these festivals, their outcasts, they are kids that have a hard time recognising themselves in this society and that’s why they in their own way rebel against their system because they want to stand out and be individuals, they don’t want to be put down or put into these boxes. For them, they feel like a sense of fighting for their own liberation and their own freedom and I think when they see the Aleister Black character they gravitate towards me because I carry all of that with me. I came up with that moniker ‘No man is ever truly good. No man is ever truly evil’ because you don’t have to agree with anything I do, the basis for what is right and what is wrong is for everyone to decide on their own, I think a lot of kids understand that so they go ‘Yeah, Aleister Black he’s my guy’ because I represent individualism to the point that I represent individualism for myself, you are going to get kids that are like ‘No, I can’t deal with him’ and then you get a bunch who get it and are like ‘He’s my guy’ and it’s all good. I think that is why the character translates so well into metal because that is the spirit of metal. The spirit of metal is individualism, the spirit of metal is you being you and just trying the hardest to be yourself without hurting anyone else.

I couldn’t agree more. You mentioned the lyrics to your theme song The Root of all Evil. How important is your theme music to who you are as a character and did you have a hand in who recorded your theme music?

Aleister: I did not have a hand in picking my music, however, I did write some of the lyrics for my theme music. I was stoked when they got Brendan from Incendiary to do the vocals because Incendiary is a sick hardcore band, and I’ve been a big fan of them for a long time so for them do my vocals and collaborate with CFO$ it was a dream come true being able to write some of my own lyrics. It’s hugely important for me that my theme song resonates with my character because it’s the first thing they hear and it accompanies me to the ring so I want them to hear that, feel that, see that and come with me.

I have two more questions with you before I let you go. So Firstly which rockstar do you think would make the best wrestler?

Aleister: Oh man! you are putting me on the spot dude (laughs) Henry Rollins. I think we would make a good pro wrestler, I think he would be a very smart pro wrestler. He’s got an attitude in a good way, he knows what he wants and he’s a very smart individual and he represents that raw mentality, he has a real never say die mentality. I think he was pretty jacked in his day and I think he still works out a lot. He’s just one of those guys, he would be great, he would have ‘IT’ 100%.

And in closing do you have a message for all the fans out there that will be coming to see NXT at Download and what can we expect this time around?

You can catch Aleister Black performing alongside the rest of the NXT superstars and Avenged Sevenfold, Guns N’Roses, Ozzy Osbourne and over a hundred bands at this years Download Festival on June 8-10 (campsite open June 6th – June 11th). Tickets for Download 2018 are available at the official Download online ticket shop here.

You can also catch him on NXT on Wednesday nights exclusively on the WWE Network over on www.wwenetwork.com.