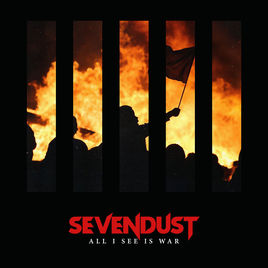 Sevendust have always been a tremendously underrated band. Emerging onto the scene in 1997 (despite forming in 1994) they were placed into a crowded scene and somehow overlooked. The main difference between them and their peers is that they are fundamentally a more thoughtful form of band, one that displays a great deal of care in everything they do.

Their latest album All I See Is War is the twelfth of their career and arguably one of their best. It sees them deliver a huge set of songs infused with passion and heart but still featuring all their trademark heaviness. Dirty kicks things off promisingly with a riff so bouncy and fun that it draws you straight in. It’s a guaranteed earworm that gives way into the heavier and more combative God Bites His Tongue, which gives you a bit more crunch but still has the soaring vocals that keep you invested.

The heavy moments keep coming with Cheers and Risen. Both are absolute behemoths with chugging riffs and some of the stronger vocal performances on the album. These two tracks feature some deeper,harsher vocals which drive the songs forward, showing that even after all these years Sevendust hasn’t lost any of their bite.

There are some lighter moments on the album to balance things out, providing some balance. This is where the band’s passion really shines through and you see the moments that placed Sevendust above a lot of their peers. Tracks like Sickness which opens itself up with a huge chorus that perfectly showcases the versatility and lasting appeal of Lajon Witherspoon’s incredible vocal talents. From there we get Moments, a piano lead track with poignant lyrics about building bridges. One of the standout performances on the album comes in the form of Not Original, a solemn track that gives us the most intricate and restrained track on the album. It’s a moment of beauty that connects completely and brings itself to the forefront for bringing us into the more vulnerable and intimate side of Sevendust.

Over the course of nearly twenty five years and twelve albums, Sevendust haven’t lost a step. All I See Is War is one of the most consistent, and well-balanced albums of their career. It perfectly shows a band that has grown and matured and settled into a groove, and it demonstrates why they have endured for so long and managed to outlast a lot of their peers.

All I See Is War is released on the 11th of May through Rise Records.