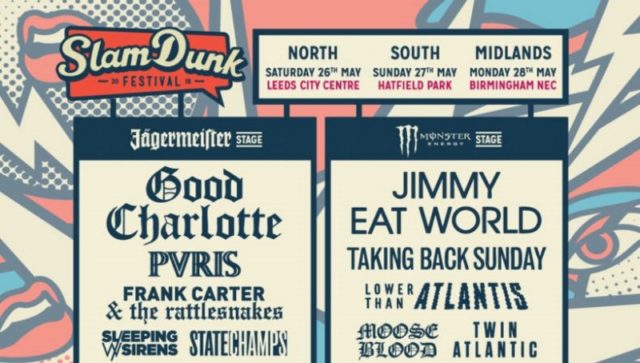 The last weekend of May is fast approaching which means two things. It’s another bank holiday and Slam Dunk Festival is on the way. One of the major highlights of the musical calendar and always a great way to kick off the Festival season proper.

This years lineup is an all-star occasion and is so big and so solid across the board that two of our senior writers Sam Dignon and Simon Crampton have taken a look at this years bill and put together a list of the essential acts you need to see at Slam Dunk this year to ensure you have the best day possible.

Jimmy Eat World (Monster Energy Stage headliners)
Closing out the Monster Energy stage at this years’ Slam Dunk are Jimmy Eat World. It’s almost ridiculous that this band have never played Slam Dunk before. Being one of the most adored emo bands ever, they seem like such an obvious fit for the festival. Still, they are finally making an appearance and when they headline the monster energy stage you know it’s gonna be non-stop hits. Whether it’s all the big hitters from Bleed American or Futures or material off their genuinely underrated later albums, this set is guaranteed to be a great time. What better way could there be to end a festival than belting out songs like The Sweetness and The Middle with your mates. (SD)

Good Charlotte (Jagermeister Stage Headliners)
Good Charlotte are the elder statesmen of pop-punk. Returning in 2015 after a four year hiatus, the brothers Madden and their band of merry men have been tearing stages up the world over once again. Let’s face it, Good Charlotte have aged like a fine wine and continue to show why they have always been so popular. Honestly, who doesn’t want to spend a summers night with their arms around their mates singing Lifestyles of the Rich and Famous at the top of their lungs. (SC)

Four Year Strong (Jagermeister Stage)
Easycore bruisers Four Year Strong are making their return to Slam Dunk this time on the main stage. The band have seen a real resurgence over the last few years and their heavyweight take on pop-punk is always a good fit for the Slam Dunk crowd. This set will definitely be for fans of big sing-alongs and big mosh parts. (SD)

Creeper (Jagermeister Stage)
Southampton’s Spookiest residents are riding into Slam Dunk to spread a little south coast misery. 2017 was a show-stopping year for Creeper and anticipation for their set is at an all-time high, and understandably so, with a live show that is tighter than the jeans of a scene kid and a collection of songs that are already modern classics. This is will end up being one of the most talked about sets of the weekend. (SC)

Twin Atlantic (Monster Energy Stage)
Another band making a comeback of sorts is Scottish rockers Twin Atlantic. The band have been fairly quiet over the last few years but expect them to return in a big way at Slam Dunk. There aren’t many bands on this line up armed with songs more perfectly suited to outdoor festival stages than Twin Atlantic. Hopefully, their Slam Dunk sets will be a reminder of just how great this band are. (SD)

Taking Back Sunday (Monster Energy Stage)
Taking Back Sunday have always been one of the biggest and most consistent bands in the scene. They have been on the form of their career over the last couple of years, and with an arsenal of emo jams that could put most bands to shame, they will undoubtedly provide one of the days biggest singalongs and the perfect warm-up for headliners Jimmy Eat World. (SC)

Comeback Kid (Impericon Stage)
If you’re looking for something a bit more aggro then Comeback Kid will be bringing all the mosh to Slam Dunk. The Canadian hardcore heroes are one of the most consistently brilliant live bands with their explosive energy and brilliant back catalogue of hardcore anthems. The pit is gonna be non-stop for this one. (SD)

Every Time I Die (Impericon Stage)
Every Time I Die are one of the most riotous and explosive live bands on the planet. Whenever they hit the stage, they hit it hard. One of the heaviest and most unique bands on the bill the riffs will be coming thick and fast, and there’s a good chance they will break the record for most circle pits seen at Slam Dunk and that is something you won’t want to miss. (SC)

The Skints (Fireball Stage)
Ska will always have a place at Slam Dunk and The Skints are no strangers to the festival. Their laid-back mix of reggae and ska will really hit the spot if you’re looking for something a bit more chilled out. (SD)

Reel Big Fish (Fireball Stage)
Reel Big Fish are ska punk legends. For over 20 years they have giving crowds all over the world good tunes and good vibes. They will be bringing their A-Game when they Headline, and if the weather holds up then what could be better than belting out some of the happiest songs ever written with some beer and sunshine, its the perfect combination. (SC)

Me Vs Hero (Signature Brew Stage)
Me Vs Hero announced a few special reunion shows for Slam Dunk. Playing their debut album Days That Shape Our Lives in full, this is going to be a serious throwback for fans. Again they are no strangers to Slam Dunk which is why it just feels right that their reunion shows are happening here. Expect big choruses as fans get the chance to relive their late teenage years. (SD)

The Devil Wears Prada (Impericon Stage)
Arguably the heaviest band on the year’s bill and perhaps one of the most underrated. The Devil Wears Prada don’t make it to these shores very often, so any chance to see them should be taken advantage of. Especially when you consider that not only do they have some of the best metalcore songs ever written at their disposal, but they are genuinely a fantastic live band who play every show like it might be their last. There will be breakdowns, there will be pits and you will love every minute of it. (SC)

Dream State (Rocksound Breakout Stage)
Dream State are easily the standout band on the Rocksound stage this year. With their latest EP Recovery showing so much promise, Slam Dunk could be their breakthrough moment. Their emotional post-hardcore anthems have really grabbed attention and the band certainly have bright future ahead of them. (SD)

Save Ferris (Fireball Stage)
My dark horse pick for the day. California’s own Save Ferris. The other famous ska punk band from Orange County that isn’t No Doubt. This will be a fun one, Monique Powell and the boys will be making a long overdue trip to the U.K and they will be bringing sunshine and some of the most irresistible pop-tinged ska songs that you have ever heard. Get your dancing shoes on, get the drinks and get ready to party because this will be one hell of a good time

Rob Lynch (Key Club Acoustic Stage)
Over on the acoustic stage, Rob Lynch will be playing on the festivals most feel-good sets. Expect cheery folk-punk tunes and just an all-round positive vibe. (SD)

Tickets for Slam Dunk 2018 are still available from www.slamdunkmusic.com. 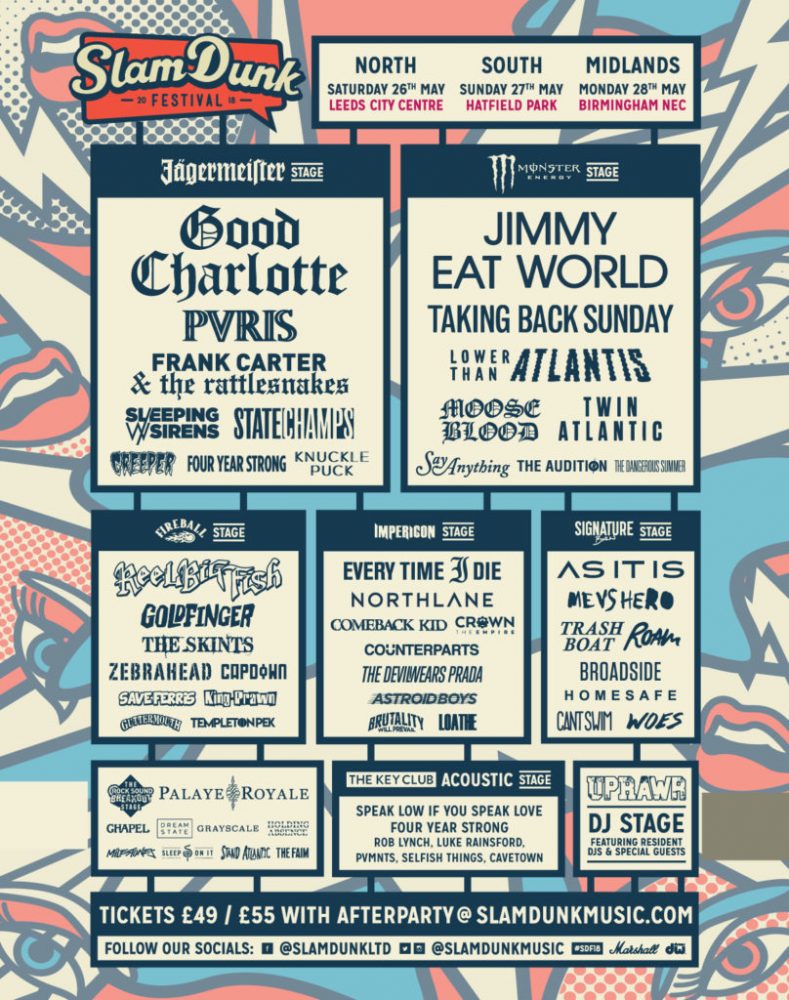