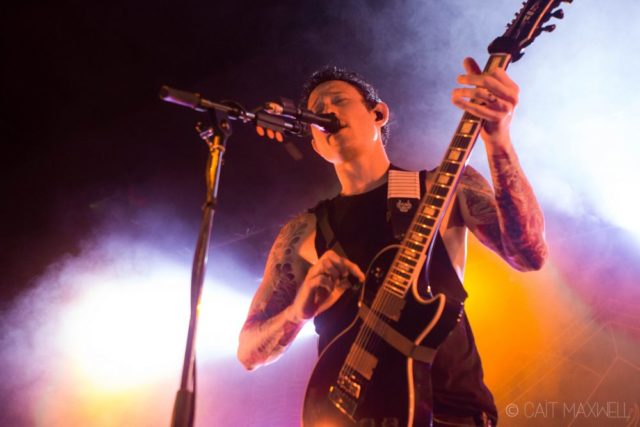 A glorious sunny afternoon in South West London and the arrival of several thousand of the metal hordes from the UK and beyond can mean only one thing today – time for one of the most eagerly anticipated tours of the year. What started as an exchange on social media between Trivium frontman Matt Heafy and Metal Hammer editor Merl Alderslade took on a life of its own, and several months later team Rock Sins was out in force for the final date of the Hammer backed super tour featuring Trivium, Code Orange, Power Trip and Venom Prison.

Arriving in the already well populated theatre part of Brixton Academy a couple of minutes late due to a great chat with Trivium’s Corey Beaulieu (read that here soon exclusively on Rock Sins), Venom Prison (8) were already busy ripping ears and heads off. Roughly nine months had past since we last saw Venom Prison own the night at the Heavy Music Awards, and Larissa and the boys looked equally at home on the much larger Brixton stage as they did at House of Vans for the HMA’s. Given their slot and position as the opening and heaviest band on the bill, they received a tremendously positive reaction, and looked to have acquired many new fans during their half hour slot. They won’t be openers on shows like this much longer if they keep up their impressive performances.

Of the three support bands, the closest in sound and style to Trivium are Texas thrash/hardcover crossover collective Power Trip (9), who were greeted with a thunderous reaction. However shortly after a thunderous rendition of The Executioners Tax, it all went slightly wrong through absolutely no fault of the band. Not once but twice in quick succession, the X sign was held up by members of the large moshpit (used in wrestling to signify when a wrestler is genuinely injured as opposed to being part of the story), resulting in lengthy delays to allow for help and treatment. It is a testament to just how good Power Trip were that this did not detract from their set, with each song receiving a more thunderous reaction than the one before it, with heads all around us banging like it was a matter of life and death. They’ve recently been announced to play the main stage at Bloodstock Open Air 2018 this Summer, and on this evidence, they could steal the show.

To the horror of many, including many others on the Rock Sins staff, Code Orange (6) have just never done it for this reviewer, and it’s fair to say after watching them in their biggest tour slot to date, that opinion hasn’t changed much. Judging by the very mixed audience reaction to them (not at all hostile, but there were large groups who just didn’t seem all that bothered), for once it seemed I was not in the minority. Their undoubted tightness on stage and aggressive technical proficiency cannot and should not be faulted, and like Power Trip they weren’t phased by another injury stoppage (shortly after which someone was dragged out by the security for “crowd killing”, and thankfully this was the last stoppage of the night), so some credit must deservedly be given. They will have no doubt been lauded in other reviews for their performance, but they are not my cup of tea at all.

Last February, Trivium played an excellent show to a sold out Roundhouse in North London, but it was a show that was notable for its lack of support for the band’s current album at the time Silence In The Snow (only a couple of tracks making it onto the setlist for the show). With The Sin And The Sentence having gone down far better with critics and fans alike, it was going to be very interesting to see both how much faith Trivium (9.5) had in their new album, and what the reaction those songs was going to be like in a live setting.

Opening as one might expect with the title track from The Sin And The Sentence, Matt, Paolo, Corey and Alex were greeted with a thunderous reaction that didn’t let up for the next hour and forty minutes. Launching straight into Throes Of Perdition at the conclusion of The Sin And The Sentence (and getting one of the loudest cheers of the night by doing so), this was a performance that included so many of the things so many have come to love about the Florida quartet over the years. Whereas their previous tour at the end of the Silence In The Snow cycle having something of a greatest hits feel to it, this time around there was a huge emphasis on the new album with over half of The Sin And The Sentence being performed, and also some rarities plucked from the back catalogue.

Deep cuts like Inception Of The End from In Waves and Becoming The Dragon (regarded by many as the best track from the oft-maligned The Crusade) went down a storm, but arguably not as much as the new songs like Sever The Hand and Betrayer did. All the while Matt Heafy was commanding proceedings with absolute authority, the entire venue in the path of his hand. One of the other members of Team Rock Sins remarked that sometimes Matt can come across as something of a “plucky underdog”, but there was nothing of the sort here tonight. Whether it was getting the place bouncing, speaking of his love for the UK or comparing the crowd to Manchester and Paris, Brixton Academy was Matt’s to do with as he pleased.

Back to the music, and Until The World Goes Cold has never sounded as chuggy and heavy as it did at this show (shout out once again to Alex Bent being a physical incarnation of Thor on the drums), before an Ascendancy one-two punch of Like Light To The Flies and Drowned And Torn Asunder sent the place absolutely bats***. Finishing the main part of the evening with The Heart From Your Hate, and an insanely well received Beyond Oblivion (probably the pick of all the new material in the live setting). With the new God Of War game imminent, it seemed highly fitting that Trivium would come back out and launch straight into Shattering The Skies Above, recorded for one of the previous games many years before. Having ripped through perhaps the heaviest song in the entire Trivium arsenal, all that was left was for the obligatory closing one-two punch of Pull Harder On The Strings Of Your Martyr and In Waves to take every last bit of energy from the assembled throng of metalheads in Brixton Academy.

This show (and this tour as a whole) has done so many good things, both for Trivium and for metal as a whole. Whether by choice, or by accident, Matt Heafy has found himself something of a champion for up-and-coming heavy bands, and his ardent promotion of bands like ones on this tour with Trivium, as well as Conjurer, Employed To Serve and many others has not gone unnoticed by many. But, as this tour has proved, it’s not just talk, and Trivium have put their money where their mouth is by bringing out three of the most promising bands of the moment, creating a diverse and highly enjoyable tour that has been deservedly praised by just about everyone. In doing so, and by releasing their best album in a decade, Trivium are once again a band who have a realistic shot of getting to the very top where so many of us who saw them back on that cold Saturday morning at Download 2005 thought they would get to. The only thing left to say is, can we do it all again soon?

You can also check out Rock Sins exclusive photo gallery from the Manchester show on this tour right here. 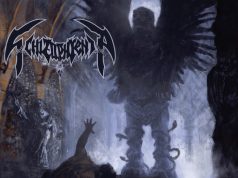