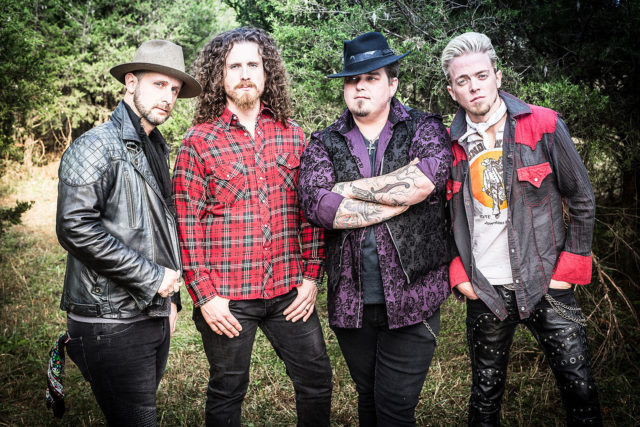 Black Stone Cherry are one of the biggest rock success stories of recent years. They have risen from a small band from Kentucky to a bona-fide arena rock outfit in a little over a decade. We are able to catch up with their Bassist Jon Lawhon to discuss the band’s fantastic new album Family Tree as well as opening for Guns N’ Roses, their history with the Download Festival, their approach to songwriting and most interestingly which pop star they would most like to collaborate with.

You are back at Download once again. You have a pretty big history with this festival, I think at this point you have probably played every single stage and then kept working your way up. How does it feel for things to keep getting bigger every time you come back.

Jon: Our very first time here, we were the first or second band on the main stage, and even then being that early on, there was a humongous mass of people and I remember walking out and not really looking out so much as I was looking down so as not to fall off the stage, I stuck my fist up in the air and that’s when my head came up and I realised there were like 60,000 people in front of us, and that’s the closest I’ve come to throwing up onstage I’ve ever been. Since then we’ve played later in the day on the main stage then we got moved over to headlining the second stage, we did a secret show for the fans on the third stage in the tent stage, so we have been all over this festival and we have been fortunate enough to play it over many many years, including 3 years in a row which is not common for Download, they usually alternate years and so on. We’ve definitely seen the growth, we have absolutely noticed it and we’re incredibly grateful for it and to have the slot we had this year was probably the most insane thing we have done in our career up to this point, and who knows maybe in a couple of years we’ll reach that Guns N’ Roses slot and headline one day and until then we are just grateful to be given what we have.

How was opening for Guns N’ Roses. What is that like as an experience.

More pressure than you have ever had before.

Jon: Absolutely, when you’ve got a band like Guns N’Roses as the headliner, and Guns, has been and is the biggest freaking rock band in the world, and just having the opportunity to share a stage with them was an honour in itself, and to be able to do as direct support at Download on the main stage was absolutely insane.

Jon: I think it’s more like there is an evolutionary path and just try to find new, fun and interesting ways to write, When we first started, the four of us would just get in a room and we would write all the music and then we would sit down and just hash out lyrics, and now with touring and all that its kind of evolved and we all just huddle up in the back lounge of the bus, and we have got logic on a computer and we will program drums in logic however John Fred says he would like to play it and we program the drums as closely to what he would do in digital space, and whoever comes up with different riffs, we are passing guitars and basses to each other trying to get the jist of it down and seeing how it comes down, it’s kind of like this insane factory working in the back lounge all the time so we’re constantly cranking out new and interesting music, and then when we get closer to studio time we will sit down and listen to everything and the stuff that feels like it makes sense together as a whole, as picture and a snapshot in time, those are the songs that end up going on the list and if we feel like we are missing anything and missing any gaps, or if there’s a couple of songs on the list that we aren’t really that impressed with as a band we’ll pull those and write some new material to make sure that we’re filling the record.

Jon: We’ve had fans and management, even our label talk to us about stuff like that, it’s not off the table by any means, I just don’t think we are quite there yet. I think before we did an acoustic album I think we would probably do an acoustic tour first of the songs that the fans have been digging over the years, there are certain songs that we do like In our Dreams off the Kentucky record we came up with an acoustic version of that, that is a completely different animal to what the electric track is, I think that’s the coolest thing when a band takes a heavier song and turns it into a more laid back folky acoustic jam, where the song evolves and it becomes something completely different when you’re done with the acoustic version of it.

I’ve noticed that when you write, your songs are very visual. There are stories within the songs, and the songs all mean something. Is that something you do consciously so that they do all have meaning to them or is that just the way it comes out.

Jon:  We’re from Kentucky and one of the things Kentucky is famous for is storytelling, like the pictures you of the old days in Kentucky, it’s not uncommon to see a little old man sitting on a park bench and whittling on a stick, talking to a bunch of kids who are sitting around him and he’s just telling stories from his youth, they are usually expanded upon and the truth is stretched to make it more interesting, and that’s what we do, we take an idea when we write a song and make it larger than life.

You are coming back to the UK in December for an Arena run. This isn’t your first time headlining arenas in the UK, it’s your third time. How does that feel for you to be a well-established arena band outside of your home country.

Jon: It’s pretty exciting to know that we’ve been to able to grow to a point where we can walk into our own shows at a venue that holds anywhere from 8,000-12,000 or more people, especially being able to do it with bands that we’ve become good friends with, like The Cadillac three who are supporting along with Monster Truck, who we’ve been fans of for years, in fact the year we headlined the second stage Monster Truck actually opened that stage, and we were all excited about that, and after our soundcheck we stuck around to watch theirs, because we knew we wouldn’t be able to watch the show because of press and so on so we watched them, hung around and chatted with the guys and became buddies with them. The Cadillac Three used to be a rock band years ago called American Bang and they opened for us years ago and it’s just cool to keep that friendship going.

You take quite diverse bills with you as well, because last time you went out on a run you took Shinedown and Halestorm with you. Is it important for you to diversify your bills, rather than just sticking to lineups of bands that all sound the same.

Jon: Absolutely, you can even listen to our records and see where we cross genres a lot between hard rock, blues, folk, country etc. for us it’s all about good music, it doesn’t matter what the genre is as long as it’s good, it’s the same when we write records, if we write good songs it doesn’t matter what the genre is. I guarantee you if you walk up to any grouping of people out there and steal their iPod from them and look at what’s on there, you are going to find everything from Ke$ha to mott the hoople, it’s going to be a random array of music, and that’s how we grew up, we listened to everything since we were just little kids. John Fred and I are probably the biggest pop fans you will ever meet because we listen to tons of stuff like Imagine Dragons and  Adele, but at the same time we’re going to listen to Slipknot and Korn, and maybe some old school hip-hop, you never know what we are going to listen to.

Which leads me to ask the question if you could have anyone outside of the rock world guest on one of your songs who would it be.

Jon: Adele. She is absolutely outstanding in every way, not only as an artist but as a human being as well, you can tell by the way she talks between songs, you can feel just the vibe and the love ooze out of her and I have nothing but respect for her because of that.

You used to cover Rolling in the Deep, and the connection to that song makes a lot more sense now.

Jon: We all have a pretty strong love and passion for Adele, she’s fantastic. The day her new album came out we all downloaded it and were texting each other back and forth like a bunch of fangirls, which is pretty funny.

If you could swap bodies with any other member of the band for a day who would it be and why.

Jon: It would be John Fred because I’ve played drums since I was a little kid and I think it would be cool to play the drums in front of a crowd that size. (Laughs)

Do you have any closing comments the Black Stone Cherry fans.

Jon: Real simple, we love you all very much, and I can say that wholeheartedly from all of us even though it’s just me standing here, we all love you so much and thank you so much for all the support in helping us spread the love and positivity that we do in our shows and keep that in your lives every day.

Black Stone Cherry will be returning to the UK in December all dates and ticket information can be found here https://www.livenation.co.uk/artist/black-stone-cherry-tickets?omq=black%20stone 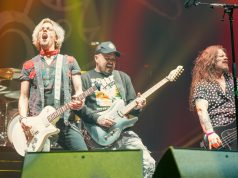