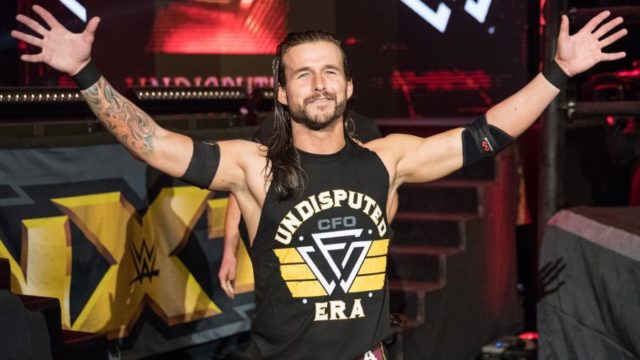 NXT is the hottest brand in sports entertainment and one of the reasons for that is the group Known as The Undisputed Era as lead by Adam Cole. Their mantra is to ‘Shock the System’ and they certainly have done that since their arrival in NXT with 3 of the 4 members of the group holding titles. We were able to grab a quick chat with the man known as Adam Cole BAY-BAY to talk about his impressions of the Download Festival, being the first winner of the NXT North American Championship, where he thinks The Undisputed Era stacks up against the great factions of the past and where he see’s the future going.

Welcome to Download. It’s your first time here, so what have been your impressions of it so far.

Adam: The coolest thing for me is, I’ve never been to a festival of any kind, let alone a music festival, so to see all of these kinds of people coming together and collaborating together to support music or support pro wrestling was really cool. As far as how the fans themselves were, to me it’s the typical UK crowd, they’re rowdy, they’re excited and they love good pro wrestling, so they’ve been awesome.

You are currently the leader of one of the hottest groups in NXT right now with the Undisputed Era. How does it feel for you to be such a focal point, not only as part of the group but also on your own.

Adam: I obviously had high goals for myself coming into NXT, I knew I wanted to try to be a top guy here, what I didn’t know was that I was going to get to do it with my friends and to be the guy in the leadership position is also really cool. These guys I admire not only as co-workers but as friends. I’ve known Kyle O’Reilly for years, Roderick Strong was a mentor of mine, Bobby Fish is another guy who’s a close friend of mine and has been for a while and for all of us to be running rampant in NXT and being in top position has been awesome. It makes me realise the chance that we have to accomplish the goals that we want because I know with this group and what we’re doing, we’re just getting started.

How would you rank The Undisputed Era against other faction’s throughout WWE’s history.

Adam: Oh man, we’re number one! you can’t name the top WWE factions of all time and not have Undisputed Era at the top of the list.

You guys are currently embroiled in a feud with some of the British Strong Style guys and that will be coming to a head at The Royal Albert Hall. How are you feeling about them having home field advantage.

Adam: I’ll tell you, anyone, who watches NXT knows that The Undisputed Era sometimes gets a mixed bag of a response, some people love us, some people boo us. I’m pretty certain that entire Royal Albert Hall is going to hate our guts, pretty confident of that but we’re ready for it. Whether we get booed or we get cheered, we go out there and do what we do and entertain the best that we can. I’m on the road for two weeks straight, but that match specifically is the one I’m the most excited for.

You became the first ever NXT North American Champion at NXT Takeover: New Orleans in a 6 man ladder match, by far one of the best matches I’ve seen in recent memory. How are you handling the responsibility of being the first man to hold that belt?

Adam: I gave myself about 5-10 minutes to sit back and look at it, realise what just happened and be excited and happy about what just happened. It was such a cool moment for me, my girlfriend was there, my family got to watch it, so again it was really cool. Then the reality of the pressure starts to set in, but it’s a good pressure, for me, I perform and achieve most of what I want to when I’m under pressure, it just puts people in a different state of mind, a different mindset, it’s a pressure, but a good kind that I look forward to.

What are your goals going forward? Will you be looking to get that NXT Championship from Aleister Black?

We’ve talked a fair bit about NXT today. How would you describe NXT for someone who is unfamiliar with it

Adam: To me NXT is like a rock concert rollercoaster ride. The fans themselves are so passionate, and that is what I love about that brand specifically. Of course Raw and Smackdown are great shows, but what I think makes NXT different is the fans, I feel like they know everything about each and every person that performs, I feel like they are invested on a whole other level, they know that NXT is coming from the ground up and it’s establishing itself as a brand and we’re seeing how far we can take this thing, so they are proud to be NXT fans, so to me seeing how passionate they are plays a big part in the show and the type of events we are putting on. It’s all the best guys from all over the world, from Japan, Europe, America, Mexico, so for me pound for pound as far as the action in the ring NXT delivers the best pro wrestling there is.

And in closing do you have any final comments for the fans.

Adam: I’ve been wrestling for 10 years now, to think that at 18 when I decided that I wanted to do this and I had a goal of being in WWE and now it’s happening it’s cool. I don’t know if it’s fully sunk in yet, I don’t know if it ever really sinks in because everything is so busy all the time, but for all the people who supported me from day one or the people who just met me and started supporting me through watching me in NXT I know its cliché, but thank you. It’s really really cool and it means a lot that I have gotten to where I am and a big part of the reason I have achieved what I have is because of fan support, there’s no question to that.

You can catch Adam Cole and the Undisputed Era alongside all the stars of NXT on Wednesday Nights exclusively on the WWE Network over on www.wwenetwork.com.