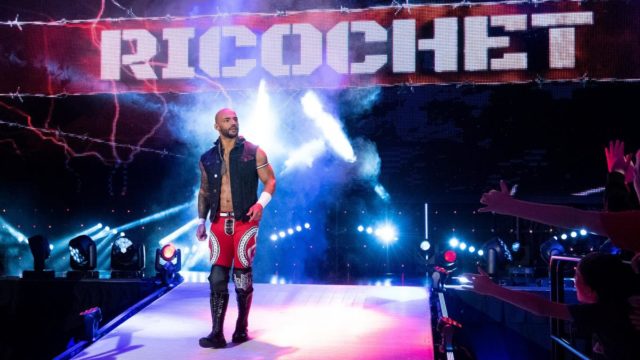 Continuing on with our NXT coverage from Download Festival 2018, we were able to catch up with one of the brands most breathtaking performers, the human bouncy ball, the one and only Ricochet. He is one of the most buzzed-about performers in the wrestling world right now, and he was one of our picks to watch at Download. We chatted about being at Download, his expectations, his place in NXT, feuding with The Velveteen Dream and the importance of utilising social media to generate buzz for what he is doing.

Welcome to the UK. How has Download Festival been treating you so far

Ricochet: It’s super awesome. I love music, I love bands. I’ve loved music my whole life and to be here not just to be here, but to be here with NXT and get to see Guns N’ Roses later, it’s awesome. It’s just a crazy experience that I never would have thought was possible.

Ricochet: I feel like it’s just everything overall. I Feel like there’s only one guy who can go out there and not only just do the things that I’m capable of doing, but the style that I do them in. It’s not just going out there and just doing a suplex or something like that, it’s all in the swag you put into it, and also everything else that goes into it, the work ethic and the drive that I have, the whole embodiment of everything, there’s the one and only guy doing that and it’s me.

You have entered NXT with a bang. Your first televised match was at NXT Takeover: New Orleans in that incredible ladder match, and now you have entered into a feud with The Velveteen Dream. How are you feeling about coming straight in and being one of NXT’s top guys.

Ricochet: I’ve been so lucky and fortunate to be put in all these positions, I didn’t think it would be that fast, but it’s cool. For me high-pressure situations are where I thrive the most I think and these are hopefully no different. I got fortunate enough to be in the ladder match which showcased a lot of my in-ring stuff, it only showcased a little bit, not even a lot, it was just me getting beat up a lot. Now we are transitioning to the Dream angle where I get to show another side of me and a little more personality as well as in ring stuff, so I feel like it’s been a great transition so far and that’s due to Triple H and Shawn (Michaels) and the writing team, so props to them for helping me out a lot. There hasn’t been a lot of pressure until recently, but now it’s coming up, Takeover is such a big thing and it’s going to be a singles match, so the focus is on us. A lot of people are saying this could be the match of the weekend, and you know when it comes to weekend stealing matches I’ve had a couple I think, so I feel like it’s going to be good. Like I said though the pressure I think is good, it gets my heart beating a little bit and the blood pumping, it gets me excited so I love it.

You and Velveteen Dream have taken your feud to Twitter. Social media plays a big part in what WWE does nowadays. So how has the use of social media factored into helping you get the angle over?

In closing, do you have any final comments out there for the NXT fans?

You can catch Ricochet in action against The Velveteen Dream this Saturday (June 16th) at NXT Takeover: Chicago and every Wednesday on NXT all available exclusively on the WWE Network www.wwenetwork.com.