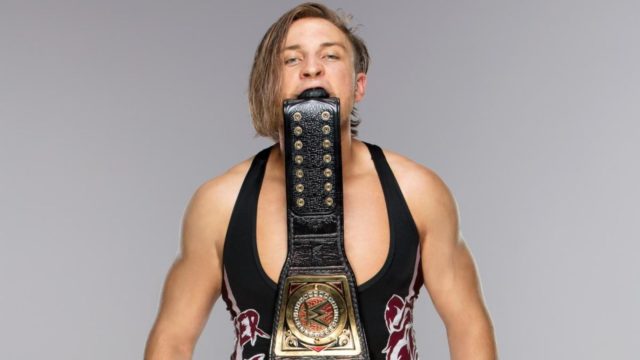 Last year WWE introduced the UK Championship to its title collection via a brilliant tournament held in Blackpool. There have only been two UK Champions thus far in WWE history, the first being Tyler Bate and the current reigning champion The Bruiserweight Pete Dunne. We were able to catch up with Pete to discuss Download, His feud with the Undisputed Era, how he feels about his place in NXT, as well as the ongoing UK tournament which will culminate at the Royal Albert Hall and present him with a new challenger in the process, as well as which superstar he would most like to face on the main roster.

You are back at Download with NXT for the second year in a row. Your profile has been significantly elevated since you were last here, so how does it feel to be back again and in such a prominent position

Pete: It’s brilliant. I think to use Download Festival as a marker for where we were last year. This time last year I was still brand new to the company and I was still finding my feet, now a year later and I’ve held this title for a year and I’ve opened the door for another 16 lads from the UK to walk in and hopefully blow the world away just like we did.

You have just entered into a feud with Roderick Strong and the Undisputed Era, so how does it feel to be in one of the major feuds on NXT tv right now

Pete: It’s a big part of it, again using this as the marker, not only are we now finally relaunching our own brand kick-starting that properly, but we are also now becoming a big part of NXT. It feels great to have had that journey but also I’ve had my own independent stuff with British Strong Style and Progress wrestling, so it feels like two worlds are meeting in the middle and we get to take something that we built alongside WWE in a company like Progress and we get to bring that together when we face the Undisputed Era at the Royal Albert Hall.

You mentioned working with Progress Wrestling. You have a unique contract situation where you can work both for WWE as well on the independent circuit, do you feel like there is a mutual benefit to that way of working, where you are able to bring fans from the Independent scene into NXT and vice versa

Pete: I really hope so, and I think with the size of WWE it works more one way than the other. Now wherever we go around the world the shows are selling out and people are showing up to see us and I think it speaks volumes, the power that the company has, for us to start out with 16 guys that no one had really heard of in the U.k and to build that to the point where I’m one of the most featured people on NXT and I can take that to independent shows around the world and carry this title around, it’s been a fantastic year.

What is it about Download Festival that you most look forward to? is it the change of pace, the atmosphere or the chance to do something a little different

Pete: I always like doing different wrestling shows, I’ve wrestled all over the world, Singapore, Japan, China and this is another one of those unusual experiences that you don’t really get to do. On top of that me and a lot of the other wrestlers like this sort of music and there’s definitely bands here, we want to see so it does go hand in hand quite well.

Last year you came out and attacked Mark Andrews onstage after he performed with Junior. So how do you go about arranging something like that at a place like this

Pete: It was pretty bizarre, I think it was pretty cool for us to be a part of Download and be wrestling on it, then for me to come out onstage and do all that stuff, again it’s another unusual experience that will be a nice memory at the end of all of this.

We have the UK tournament ongoing currently and that ends at the Royal Albert Hall with the winner facing you. Is there anyone in the tournament that you are keeping an eye on that you would like to face

Pete: In all honesty, I know every single guy in the tournament and I’ve probably wrestled about 90% of them and I’m happy they get to have this experience. There’s a few people in there that I rate very highly like Zack Gibson and Flash Morgan Webster, and there’s also guys who aren’t in the tournament who I’m hoping get to come through, and hopefully, as the show develops and hopefully becomes a full-time thing, they can become a part of it. Whoever it is hopefully they can experience a year like I have, and hopefully, I can be a big part of elevating them to that point.

Britain has a long history with wrestling, especially with guys like William Regal who really cemented things here in the UK scene. Do you feel like having a championship dedicated to the UK has been long overdue and perhaps something we have deserved for a while now.

Pete: Something you’ll find in wrestling, in general, is that people have a respect for the British style, so to be able to have this title now and create something a little bit unique and have a unique part of the NXT show that has our stamp on it is great, and to hear that Johnny Saint is going to be the general manager of the UK show, you know if anybody epitomizes British wrestling as something quirky and unique it’s that man, and he brings so much experience to the table and hopefully that really adds to our show.

So once you have done all you can in NXT and in the British division in WWE who are you going to be gunning for on the main roster.

Pete: I’ve said it a million times before, but Brock Lesnar. He’s a top guy and that’s what I want, we’ll see whether it takes a few years or many years, but to be honest these days with the talent we have one the main roster, NXT and the UK stuff I’m just happy to be a part of all of this.

Do you have any closing comments for us

Pete: Please tune in,the show will on a week after the tapings Monday and Tuesday at Royal Albert Hall and if its anything like last year it really kick-started me and Tyler, and s year later you can see the progress that was made because of it, so if you want to see stars of the future even before they reach NXT then that’s the place to be.

You can catch Pete Dunne on NXT as well as all the action from this years UK Tournament from The Royal Albert Hall exclusively on The WWE Network over at www.wwenetwork.com.