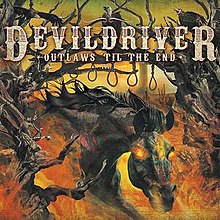 Cover can be a tricky business. You either create a carbon copy of the original thus negating its existence or you go the other way and put your own spin on it and potentially ruin it. It’s a razor-thin line that few manage to pull off.

So, its seems ballsy that two of modern metal’s biggest names have taken stabs at doing full-blown covers records this year. Lamb of God reanimated their old Burn the Priest moniker and released the punk covers album Legion XX back in May, and now Devildriver has dropped an album full of outlaw country anthems titled Outlaws Til The End.

On paper it seems like a weird idea that a band as dark and heavy as Devildriver would cover a bunch of country artists and songs, but in practice it actually makes a hell of a lot more sense. Especially when you consider who they are covering. Guys like Willie Nelson, Johnny Cash, Hank Williams are some of the most hardcore dudes in the game. So it actually stands to reason that this album would exist.

Outlaws Til The End is genuinely one of the most fun albums you are likely to hear this year, and while it isn’t a full on Devildriver record, there is no mistaking that this has Devildriver running through its veins and all the way to its core.

It also has an impressive cast list including John Carter Cash and Ana Cristina Cash who appear on a red-hot version of Ghostriders in the Sky which backs an absolute wallop. Hank III pops in for the albums opening track Country Heroes which sounds like the heaviest bar fight in a saloon in hell. It’s got country flavour and enormous balls to it, it sets the album off right. Randy Blythe lends his voice to a ferocious version of Whiskey River by Willie Nelson which may be the most outright heavy song on the album and the most pure metal in nature.

Brock Lindow appears on one of the albums more accessible tracks Copperhead Road and adds his unique vocal talents, giving the track a different flavour to it in the process.

My personal favourite track on the album is The Man Comes Around, which builds on the Johnny Cash version ans creates an even darker more apocalyptic version of the song. Of all the covers on here I think it is far and away the best adaptation of the original material.

There are some moments of genuine joy on here as you see the songs you know come back to life in a way that you have never heard before and it will make you raise a drink and bang your head until your neck snaps. With that said there are some moments that don’t quite get there. A Thousand Miles to Nowhere is a bit of a come down after the albums electric first half. Dad’s Gonna Kill Me works as a cover and works extremely well with the amount of groove the band injects into it, but its more in the vocals where it falls apart slightly, Burton C Bell’s vocals do not work within the song and it’ the one guest vocal that perhaps should have been assigned elsewhere.

Outlaws Til The End, was created by the bands own admission as a stop-gap to tide people over until the next Devildriver studio album. What it has ended up being is a really fun experiment of an album that proves that not only are Devildriver still one of the best bands in modern metal but that they were able to take a unique, somewhat niche idea and infuse it not only with another of their own signature personality but also give all of the songs and artists they have covered the proper care and respect they deserve and they didn’t have to compromise their vision or their artistic integrity in the process. Outlaws Til The End won’t be for everyone and admittedly there are some covers that don’t work as well as the others, but in the moments when it hits, it really hits and will undoubtedly leave a smile on many metal heads faces this summer season.

Outlaws Til The End Vol.1 is out now on Napalm Records