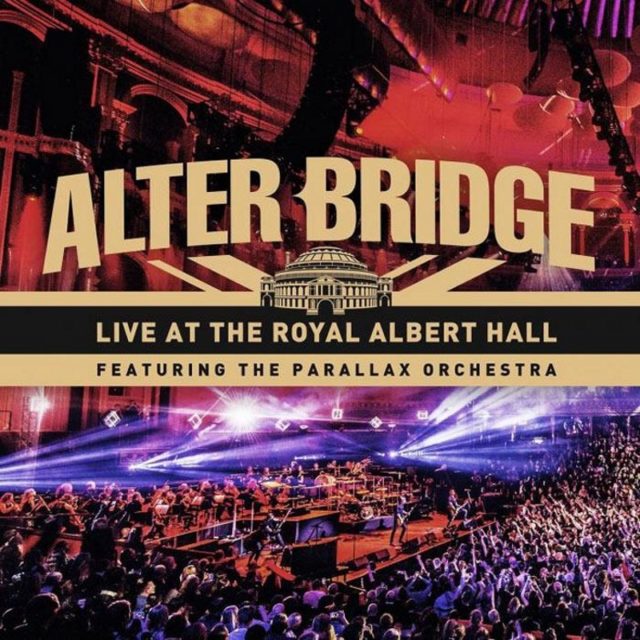 In October 2017, Alter Bridge hosted arguably the two most special nights of their career at the Royal Albert Hall in London. Performing with the fantastic Parallax Orchestra, they performing two special shows that were recorded for what would become this release, the straightforwardly titled “Alter Bridge: Live At The Royal Albert Hall“.

While the CD and audio version of this is hugely worth your time, and will probably become the “go to” version for ease of listening, this review will focus on the DVD version for a couple of reasons. One, it is slightly easier to appreciate some of the orchestral nuances in some of the songs when you can see everything that is going on, and two, you can see throughout just how much the band are enjoying themselves, safe in the knowledge that they are taking part in something very, very special.

What you also don’t get on the CD is that every few songs on the DVD, the film breaks away from the live performance. Be it for some insights from the band themselves, The Parallax Orchestra, Alter Bridge’s manager or rehearsal footage, all of it gives added value to the experience and none of it feels unwelcome or unnecessary. The cinematography throughout is masterful, and that’s an understatement. From the views of the band, to the orchestra, to the crowd, to the iconic Royal Albert Hall itself, everything is given enormous care and attention. Individual shots, sometimes only present on screen for a second or two, like of Myles Kennedy at the end of the solo in Fortress or any number of clips of Mark Tremonti’s shit-eatingly huge grin in the first few songs add brilliantly to the magic of it all.

Much has been written about the performance at the shows, including by us here at Rock Sins (you can read our review of the second of the two shows right here). With that said, this review cannot pass by without reference to the truly wonderful work done by Myles, Mark, Brian and Scott in conjunction with Simon Dobson and Will Harvey, the masterminds of The Parallax Orchestra. Every orchestration was molded to perfection, from the ethereal stringwork that accompanied Myles Kennedy’s acoustic double header of Wonderful Life and Watch Over You to the full orchestra adding even more bombast to some of the heaviest songs in the Alter Bridge repertoire like Addicted To Pain and The End Is Here. Words Darker Than Their Wings, a song long requested by the Alter Bridge faithful, was given it’s first ever live performance alongside The Parallax Orchestra and one cannot imagine it ever being performed better than on its two airings at the Royal Albert Hall. No wonder Myles Kennedy referred to its performance as “a special treat for y’all”. Every release from Alter Bridge’s fifteen years together was given due inclusion in the setlist, and the finished setlist is something that few Alter Bridge fans would not be delighted by.

While Alter Bridge Live At The Royal Albert Hall may never quite reach the same number of people as Metallica’s iconic S&M, the album that brought the concept of rock and metal with an orchestra to the masses, in years to come it may come to be held in the same regard. It will almost certainly become the quintessential Alter Bridge album for anyone who wants to enjoy a span of the band’s career, with many of the band’s songs never sounding as good as they did on those two nights and in this recording. For the lucky 10,000 or so who were there over those two nights, this release is a wonderful reminder of being present on such a special evening. For everyone else, it is fantastic they get to share in the magic of what was created between Alter Bridge and The Parallax Orchestra.

Alter Bridge – Live At The Royal Albert Hall is released on CD, DVD, Vinyl and Digital formats through Napalm Records on the 7th of September 2018.