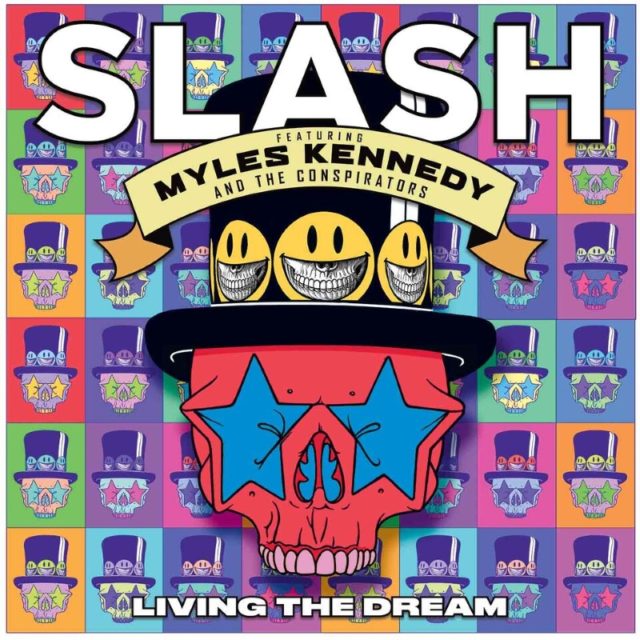 Overall Score: 5/10 Riffs: 8/10 Vocals: 8/10 Variety: 3/10 Pros: Slash and Myles have honed their craft perfectly and there's no denying it Cons: Heard it all before | lacking in variety | A frustrating listen

It’s fair to say that the guitar wielding legend Slash has been more than a bit busy over the last few years being out on the road with Guns ‘n’ Roses on the ‘Not In This Lifetime’ Tour that has grossed almost half a billion dollars. With that in mind it’s fair to assume that anything Slash does outside of that is simply for the love of the music and in the middle of the legs of the world tour he has managed to find the time to write and record the follow up to his 2014 release “World On Fire” with Myles Kennedy& The Conspirators.

Living The Dream provides a powerful start to the album with a funky riff fading in with a kick pedal on top before we’re introduced to the full force of the entire band together. Slash sounds great and Myles Kennedy something else entirely. The chorus of “Turn off the silence and pour out the fire” is a real earworm and already makes this one of the standout tracks on the album, that and Slash’s guitar solo. It feels like this song has laid out a blueprint for a number of other tracks on the album. Open with a less intense version of the riff with a repetition of the kick or snare drum. Drum fill to lead into more intense version of the riff. Less intense again. Vocals. More intense. Chorus. Slightly interesting bridge bit. Guitar solo. Whilst it’s clearly a formula that is working as the songs themselves aren’t bad, it does become boring after while and doesn’t really feel like anything that’s never been done before. Though at the same time if you’re Slash then I guess you don’t really have to.

That being said, all of the riffs on this album will make your head nod along to them like “Driving Rain” and “Sugar Cane” and tracks like “Mind Your Manners” are quite fast paced and fun. But one of the more memorable tracks on the album is the ballad “The One You Loved Is Gone” which slows things down nicely and with some light guitar and soft vocals on top. And of course a guitar solo because Slash. It builds up beautifully and is only strengthened by Myles’ belting vocals.

Whilst for the most part this album doesn’t necessarily have any “bad” songs, it doesn’t really provide anything overly memorable for the most part either. There are moments of greatness peppered throughout, but they’re surrounded bluesy riffs and uninteresting drums that don’t sound dissimilar to the songs prior with a lot of the album blurring together. This album could maybe have done with being a song or two shorter and wouldn’t have lost much, if anything. Living The Dream is more exactly exactly what you would expect from a Slash album with Myles Kennedy. Skilled guitar playing and a powerful voice, but not much else is built on top of it.

Living The Dream is out now on Snakepit Records.