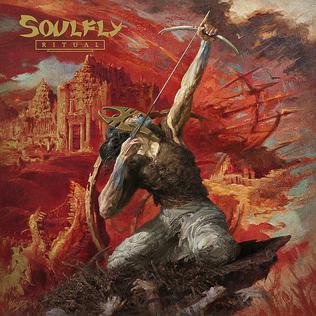 Max Cavalera is to heavy metal what Ronseal are to DIY, any album with his name on it does exactly what it says on the tin. As one of the most consistent and profilic songwriters in the metal scene, he has a back catalogue that most people would give their right arm for, and that streak continues with the latest Soulfly album Ritual, their 11th overall.

Ritual is quite possibly the heaviest album in the Soulfly arsenal, a stellar cut throat thrash album that borders on brutal death metal in places, its heavier than a pair of elephant testicles and goes just as balls out in parts to.

The opening track which is also the title one comes out of the gates like uncaged demon, its a frantic buzz saw banger that sets the stall out early, Max comes across like a man possessed and the rest of the band are playing like their lives depend on it.

Dead behind the Eyes  sees the first of two guest appearances on the album in the form of Lamb of God frontman Randy Blythe for a horrific brain smashingly brutal song based around the Hellraiser franchise, making many references to Cenobites and Hellraiser both by name, its a brilliant track that matches the music and imagery perfectly and provides the perfect showcase for both Randy and Max who work incredibly well together and together take the track to another level.

Under Rapture features the second guest appearance with Ross Dolan of Immolation and veers more into Death Metal-Thrash crossover territory and follows through on the more brutal edge the band added to their sound on Archangel. It’s one of the albums highlights, its punchy and melodic and has a surprising amount of bounce to it for a song that is so heavy, but in doing so it gives the vocals of Ross Dolan more of a chance to stand out and they do just that, as he comes to play and puts in a throat shredding performance for the ages.

Bite the Bullet and Blood on the Streets have a real Nailbomb feel to them. Machine gun rapid fire vocals showing a sense of urgency set against the backdrop of riffs so fast they could give you whiplash that show that even in writing new music Max still loves paying homage to where he came from.

Feedback! is a lovely little slice of old school and once again changes things up a little bit and gives your brain and neck a little break from all the bone crunching riffs and head banging melodies peppered throughout, leaving XI to close the album out on an ethereal jazzy world music infused instrumental providing a serene and somewhat calming quiet after the proverbial riff storm.

Soulfly are a band that continues to go from strength even after 20 years they find ways to release fan pleasing albums that stick to a signature sound whilst also managing to add new strings to their bow meaning that still manage to sound both fresh ans familair in equal measure and Ritual oncs again proves what a brilliant band they are and easily crashes its way in the conversation for best albums in their catalogue.