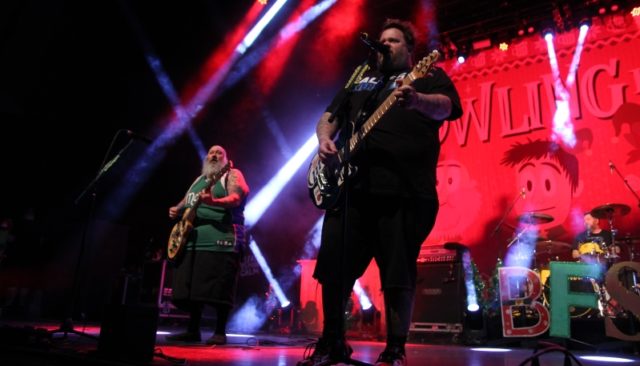 There’s a certain buzz of nostalgia around Southampton Guildhall tonight as everyone piles in to see pop punk legends Bowling for Soup on the “Almost Christmas” Tour – the bands’ second tour of the UK in 2018 following the “Get Happy Tour 2018”.

Bringing out some young upstarts to open the shows has led to quite an age range in the crowd, which is great and exactly what live music should be. Few here, however, are quite as young as opening act Not Ur Girlfrenz (8), who have been taken under the managerial wing of Jaret Reddick and have a combined age of about his actual age.

Tonight they are somewhat of a revelation, as they absolutely take the stage and crowd by storm. Playing a playful and massively confident set that showcases that they are a band way beyond their years. They deal in glorious sun kissed pop punk and dare I say it, they play it much better than some of their older and more established peers, and even a mid set run through of the My Chemical Romance classic ‘I’m Not Okay (I promise) goes down a storm and gets the crowd involved in the process. Although their time is brief tonight, we are treated to a glimpse into the future of pop punk and based on this evidence not only does the scene have a bright bright future, but Not Ur Girlfrenz will be front and centre leading the charge.

Next up were the energy bombs that were Patent Pending (7). All pop punk chords, leaps, bounces and f-bombs, which is also great and exactly what live music should be. Opening with Shake Weights & Moving Crates and Anti-Everything, frontman Joe Ragosta was affable and interacted with the crowd, even if a comment about ADHD was ill advised and borderline insensitive. However it didn’t derail the train and everyone for the most part gets on with the Pop Punk Party and the band have even managed to work out some dance routines for some songs, although it has to be said Sum 41 did it better.

The band also debut a new song Let It Burn with the almost now classic chorus line about a roof being ablaze, but no water is required as it has been fornicating with someone’s parent. Or something. Anyway, Bloodhound Gang did it better.

After a brief guest vocal from Jaret Reddick on Classic You and a cover of Can’t Take My Eyes Off Of You, which didn’t work with the arrangement Patent Pending had given it, although well done for making the effort, the set closed with one of the band’s early singles Douchebag, which has nothing to do with the Limp Bizkit stroke of artistic genius by the same name and the guildhall rang with the sounds of cheers and applause for a band that cemented their love from the existing fans in attendance and definitely won over some new ones.

Headlining a Christmas themed show on a Friday night in the middle of a city is definitely what Bowling For Soup (8) should be doing and the packed out venue roars with excitement as the band take the stage and after a quick partial jam of Corner Store on Christmas, tear into Almost and The Bitch Song. Well, I say “tear”, clearly age has become a factor now and the bouncing:stage banter ratio has definitely shifted, but in 2018 everyone knows what to expect from a BFS show and a great time is had by all.

Churning out all the hits they do actually play a blistering version of Punk Rock 101 that for the last few years has been padded out with the band posing on stage while Def Leppard’s Photograph, plays over the PA, but this time around we get a “Christmas Themed Bowling For Soup Photo Opportunity” and they pump out Last Christmas by Wham. Fortunately for the assembled throng it was the 30th November so #Whamageddon was not yet in effect.

BFS followed this up with a cover of Stacey’s Mom by regular chart botherers Fountains of Wayne, which I think most people thought was just going to be a bit of a jam for the lols, but ended up being an actual cover of the whole song and is probably tied for gig highlight with Jaret getting a guy dressed as Scooby-Doo out of the audience to switch on their Christmas lights.

High School Never Ends comes complete with pyro and guest musicians from both support bands and BFS even have time to squeeze in the theme from Phineas & Ferb before busting out Frosty The Snowman and a full version of Corner Store on Christmas.

The obligatory encores of Girl All the Bad Guys Want and 1985 close the night and everyone piles out into the cold, knowing that their weekend is off to a pretty good start.