So, with Christmas upon us, we come to our annual tradition here at Rock Sins – The End Of Year Awards! First up to share his awards with everyone this year is Sam Savigny, so without any further, over to you Sam!

Album of the Year: Fucked Up – Dose Your Dreams

By a sixth album in a career, many bands can begin to run out of steam. Whether relationships within the unit become unbearably fractious, or creative juices become ever more diluted, results may vary. The same can not be said for Canadian hardcore outfit, Fucked Up.

In returning to their character of David, the band take us through a lifetime of an adventure. From the saxophone accompanied banality of office life on None of Your Business Man, to the intense, throbbing electronic gallop of Mechanical Bull and Accelerate, the album is story telling at its finest, comparable only to Pink Floyd’s masterpiece, The Wall. Thrashing heaviness juxtaposed with serenity and sing-a-longs on the likes of Tell Me What You See tell a beautiful complex journey. Life is not one paced and comes with unnerving curveballs. By the time finale, Joy Stops Time fills around, there’s a blissfully cathartic feeling washing over you. Not simply a romantic sentiment, the song is a bookend that is as emotionally relieving as the embrace of a dearly loved one.

Punk is not simply spray cans and safety pins. It’s a sublimely transformative and anarchic genre the exerts dexterity and some of the finest craft. The eclecticism on offer from Fucked Up is unbelievably well realised. There’s not a single moment that doesn’t make sense, and not a jot of wasted potential. This is the best hardcore album since Refused’s The Shape of Punk to Come. It might just be the best album of the decade.

Black Peaks – All That Divides

To pen a great song is an unenviable task. Anyone can string some chords and bank lyrics together to make filler for an album. To create something truly great in the vein of Smells Like Teen Spirit, Enter Sandman or Redneck is nigh on impossible. It requires a delicate balance of genius layering of musicality, as well as an accessible nature that allows an audience to fall head over heels in love. With the lease single of their stunning debut Jord, Møl have created an absolute classic.

Opening with the delicate strumming of pentatonic strings, the song explodes into its first verse with vocalist Kim Song Sternkopf decimating the musical landscape. Ebbing and flowing between serene and horrifying, the song’s dynamism is stunning. By the crescendo leading to the final chorus, there’s a desperation about the piece. Clenched fists and lumps in throats populate any setting in which the song is heard, from the fields of festivals to a lone listener lost in its trance inducing state. Bruma is undoubtedly a beast of head spinning complexity, but also a beautiful ballad that will speak to any listener. In its push and pull between a gentile sensibility and brutality,  Bruma is a beauty and a beast.

Most Disappointing/Worst Album of the Year: Muse – Simulation Theory

It seems unusual that once could be disappointed by a Muse album in 2018. With the exception of the heavily underrated, The 2nd Law, Muse have been middling to poor for the best part of a decade. After four near perfect albums, the band’s quality of output fell of a cliff. So here we land with the nadir of their career; Simulation Theory.

A cynical cash in, this album revels in the already hackneyed retro futurism that plagues popular culture. Do you like Stranger Things, Blade Runner and Back to the Future? Muse bloody do. Rather than creating the zeitgeist, they wallow in it. Swathes of saccharine synths and a dearth of instrumentation make this a tedious and infuriating listen, the pit of which comes with Something Human. Proposed as a space faring journey home, it feels like a lobotomising trudge to the shops on an uncomfortably hot day surrounded by boneheaded, self-satisfied revelry. Like going to a stall at Glastonbury. It is just awful.

Matt Bellamy’s voice that once had textures and layers now uses his previously emotive falsetto as a cliché. Chris Wolstenholme’s driving bass lines – think Hysteria or Stockholm Syndrome – are entirely absent, and Dominic Howard has been relegated to playing second percussion to a drum machine. Muse have hit a new low, and it is easily the worst album released in an otherwise stellar year.

The almost parodic blasphemy of the song’s title might lead you to think that Behemoth’s anti-Christian ideation has gone too far. What we actually get in the lead single for, I Loved You at Your Darkest, is a curiously respectful display of Judea-Christian iconography. Jumps between Nergal et al performing in their usual stage regalia and of tradition Biblical imagery through soft focus and crisp camera work looks as stunning as the music is threatening.

It’s a truly bleak video, with vivid, violent reds of the Catholic attire cutting through the pale sanguine of Behemoth’s mise en scene as a brilliant display of the juxtaposition between the warring ideologies of Christianity and Satanism; a theme that has defined Behemoth’s career. Though Satanism is itself not explicitly anti-religious, Nergal’s personal battle has come to the forefront of metal culture through the last two albums, and the cinematic quality of the accompanying music videos makes this more of a mini feature film than a simple promotional tool.

Slipknot – All Out Life

Gig of the Year: Architects Live at Alexandra Palace

Ally Pally is a legendary venue. Entering through the massive plaza that adorns the front of the building, the majesty of the evening is only exacerbated. Currently being the largest headlining show Architects have played in England, the gravity of he evening is only further weighted by the fact that this victory is being celebrated without formative member, lead songwriter and brother, Tom Searle.

To say that the night was emotionally charged is to say that Brexit isn’t running smoothly. Every single song is a vigil to the dearly departed, though feels truly celebratory as opposed to a spectre of loss overshadowing the performance. Architects fire on all cylinders, with Sam Carter’s vocals in particular cutting through the mountainous technicality of their distinct metalcore sound.

Doomsday is a monolith, and ends the main set in awe inspiring fashion. When the encore begins with Nihilist, a riff heavier that the moons of Jupiter smashes the regal venue into a frenzied scream of ‘All Our Gods Have Abandoned Us’. The reality of mortality hangs heavy in the air and no eye is left dry as the band finish with Gone with the Wind. As the letters ‘TS’ emblazon the back of the stage, and Sam Carter finds himself unable to sing parts of the song, the overwhelming triumph and resolve of the band is starkly apparent. The strength of character needed to pull off this sell out show is astounding, and remains one of the greatest gigs on British soil in the history of heavy music.

Converge Live at the Electric Ballroom

Møl Live at the Black Heart

Festival Performance of the Year: Gojira Live at Bloodstock

Few bands naturally suit a festival line up. After any announcement there is always a deluge of detractors decrying the addition, but this was not the case for Gojira. One of the few universally loved bands in the heavy world, their showing at their debut headlining festival performance was masterful.

From gentle sing-a-longs of A Shooting Star to the all out technical assault of Toxic Garbage Island, the setlist was beautifully judged and expertly executed. Fan favourites like Flying Whales went down to rapturous reception, while newer songs from their sixth album, Magma like The Cell, Silvera and Stranded were monolithically heavy leading to frenzied circle pits and a cacophony of ecstatic screaming. The entire set was without fault, and stands as a historic point in Bloodstock’s history, as well as another chapter in Gojira’s inexorable rise to the very top of the scene.

Band of the Year: Architects

Few bands can inspire unanimous good will. When tragedy befell the Brighton quintet in 2016, an outpouring of grief and support came from the world, both fans and detractors alike. For Architects to have returned at all, let alone a mere two years after the loss of their lead songwriter is laudable in itself.

With their eight album, Holy Hell, Architects have proven an incredible strength. They have maintained their classic sound without appearing to be ripping themselves off, and have created something joyous. Their resolve and ability to continue in such stunning fashion is testament to how special this band are. Their unique circumstances and response to them prove them to be something truly special, and undoubtedly the band to which this year belongs.

Randy Ortiz’s Happy Person Having a Pleasant Conversation in Public adorns KEN Mode’s latest album. It is a piece oozing with terror. The harsh strokes of charcoal create an unsettling feel that accompanied the album’s distinctly terrifying sound. The title of the piece itself is a perfect summary of its subject matter; the deception  of normal life living with depression and anxiety.

The shadowy figure with its eerie smile creates a chiaroscuro against the grey background – a spectre haunting the banalities of the real world. Depression can be terrifying, but there is a comfort to its familiarity, as any viewer will find upon repeated looks at the haunting figure that represents KEN Mode’s latest opus. 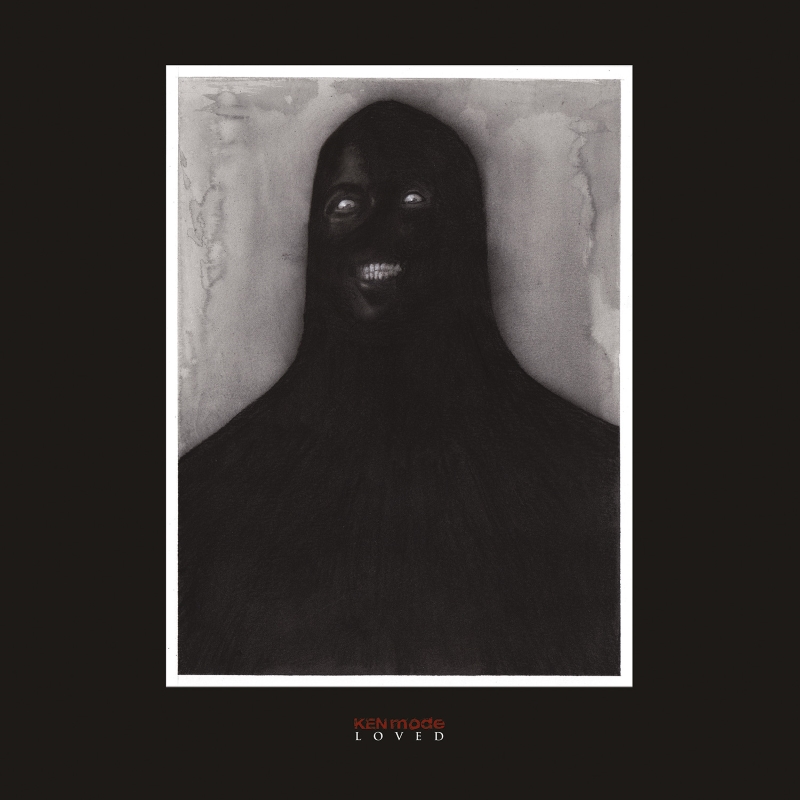 Boss Keloid – Melted on the Inch

Daughters – You Won’t Get What You Want

Black Peaks – All That Divides

That concludes Sam’s awards for another year. More awards from the rest of the team will be published regularly between now and new year so keep checking back for more highlights of the year from the team!