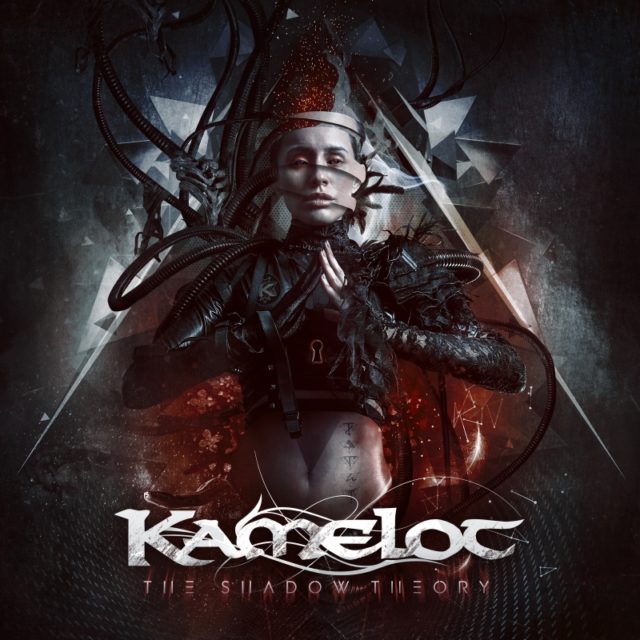 Having lost their way slightly in the early part of this decade, the current incarnation of Kamelot really found their feet with their last album Haven. Their 2015 release was arguably their best since their golden run from the early to mid 00’s of albums like The Black Halo and Ghost Opera, so all hopes were that The Shadow Theory would continue the renewed quality.

Following the intro, the album kicks into life with Phantom Devine. It’s fairly standard as far as heavier, faster Kamelot tracks go; There’s synths and keys, there’s some impressive drumming from the always impressively efficient Casey Grillo and frontman Tommy Karevik works his considerable range to good effect. Lauren Hart of Once Human also pops up to add some effective growls in the way that Alissa White-Gluz did at times on Haven. Exactly what you would want from a song early on in a Kamelot record to try to set the tone for the rest of the album.

Ravenlight continues the good start. It’s a slightly slower, more deliberate song than Phantom Devine with dark undertones, with an absolutely massive chorus. Another of the singles, Amnesiac, is enjoyable too without hitting the heights of the two previous songs, although the brief solo from their virtuoso guitarist Thomas Youngblood definitely hits the spot. From this point however, is where things start to go a little bit wrong.

Children’s choirs and metal have often not been a good marriage throughout the years, and unfortunately Burns To Embrace continues that run with what feels like perhaps the album’s biggest misstep. Kamelot should be admired though for trying something a bit out of their comfort zone, which is something they’ve not always done in the past. Jennifer Haben from Beyond The Black lends guest vocals to In Twilight Hours, which is OK but not up to the standard of the band’s best ballads (Abandoned, Somewhere In Time).

In fact, OK but not up to the standard of the band’s best is a sentence that could well describe almost the entire second half of the album. The elements are all in place that you’d want, but the mystical elements that makes Kamelot the best power metal band on the planet when they’re at the top of their game seem to have been expended on the first handful of tracks on the album. Even Lauren Hart’s return on Mindfall Remedy lacks the impact that one thinks it might have.

The album does make something of a recovery towards the very end. Of note in particular is Stories Unheard, which is powered throughout by Tommy Karevik’s vocals and some memorable riffing; A song that could easily have the listener heading for the repeat button. Vespertine (My Crimson Bride) has a chorus begging for a huge audience to be singing it along with Karevik, while the breakdown features some impressive instrumentation which promptly launches into a great guitar solo.

Overall, The Shadow Theory does just about enough to keep the momentum going for Kamelot that they generated with Haven. The album as a whole isn’t of the same quality, but there are a couple of great songs and a handful of other good ones that should see most fans happy enough. It’s just a shame the middle of the album drops off in the way it does.

The Shadow Theory is out now on Napalm Records.