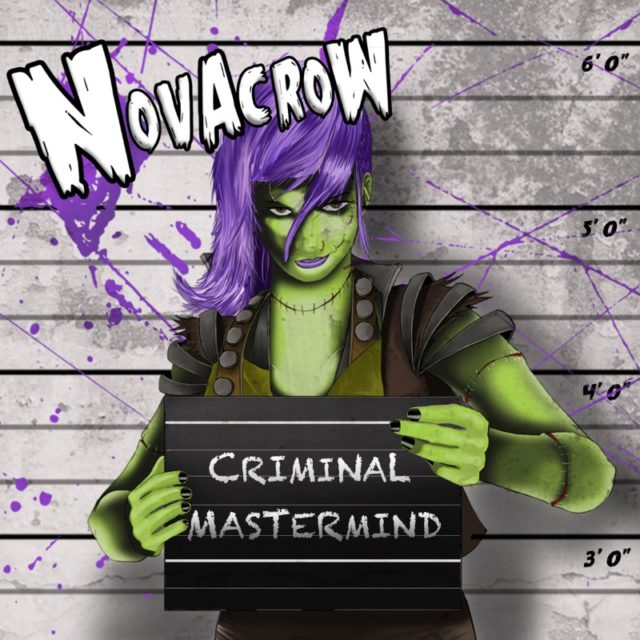 Overall Score: 4/10 Songwriting: 3/10 Vocal Melodies: 5/10 Instrumentation: 4/10 Pros: A nice amount of bounce in its rockabilly swing | A well written vocal melody Cons: One paced and simplistic | Songs seem to stretch on far beyond their actual running length | Horror themed without any musical attempt at terror

Starting a release is difficult. You can go in full force with an explosion of sonic ecstasy like Faith No More, build in lumbering intensity from quiet restraint like Russian Circles, or you can open with storytelling. The problem with the latter is that it conjures up the idea that your about to experience an amateurish Princess Bride style concept album, complete with a toe curling hammed up performance from the narrator. Sadly, that’s exactly how Novacrow have chosen to open their latest offering, Criminal Mastermind.

While it is a – as the kids would say – cringeworthy way to begin an EP, it doesn’t hold precedence over the tone of the subsequent songwriting. This isn’t a low brow conceptual release, but a collection of songs that are screaming out for a cohesive through-line. Fever Swamp has a fair amount of rockabilly bounce to it while Kitty Staunton gives a decent vocal performance. She is able to craft reasonably catchy vocal melodies and articulate genuine passion for what she does.

The EP pretty much follows a similar template from start to finish. There’s that rockabilly bounce found on every song, bar finale Are You Happy?, and the same vocal melodies throughout. It does become tiresome rather quickly, with every song feeling double its length. The instrumentation is admirable, but uninspiring, with guitar lines mirroring one another time after time, and the horrorcore spookiness grates greatly. The terror they try to employ is more of a bargain bin ASDA Halloween costume as opposed to something genuinely oppressive and threatening.

The band are clearly having fun here, but it doesn’t translate fully to the listener. The EP is admirable and far from being something truly awful, but the amateurish songwriting ability and simplistic, uninspired musicality leave a lot to be desired. This wont be going down as one of the year’s better moments, but will be a nice way to pass the time for people who like their music “spooky” but without any genuine horror. Where something like KEN Mode or Daughters leaves you feeling genuinely unsettled, this is “scary” music for the click bait generation. All style and no substance.