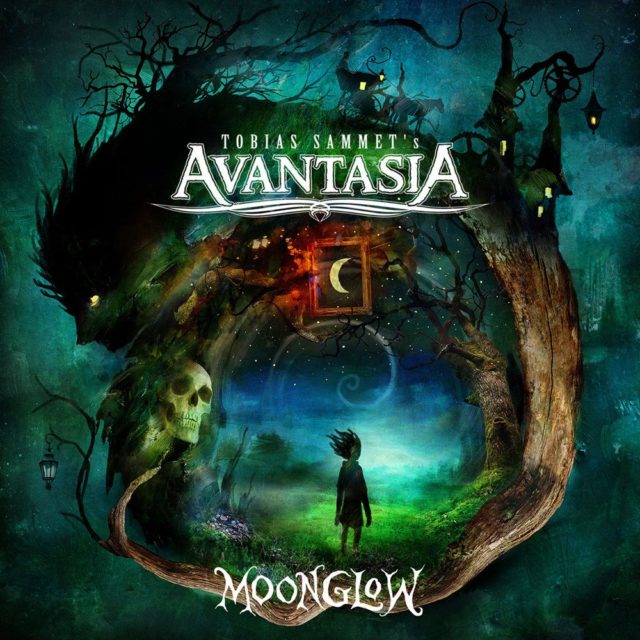 The German legend that is Tobias Sammet (also of Edguy) is back with his supergroup Metal Opera, Avantasia. Two years in the making, ‘Moonglow’ gets the honour of being Avantasia’s 8th album release – not bad for something that was just supposed to be a once-in-a-lifetime studio project back in 2001.

Like its predecessor, ‘Ghostlights’, ‘Moonglow’ too is unsurprisingly a concept album. Each song on the album forms a chapter based upon a creature that is thrown into the world but fails to find its place and turns instead to the dark in the hope of finding shelter there.

If Heavy Metal bands had ‘squad goals’ then Sammet has beaten everyone. Although he doesn’t like to refer to it as a ‘trophy collection’ – it’s hard not to admire the breadth of singers Sammet has amassed across the Avantasia project.

This album is no different and features an all-star cast comprising some of the finest vocalists in the genre including familiar Avantasian’s such as Geoff Tate (Queensryche), Ronnie Atkins (Pretty Maids), Michael Kiske (Helloween), Jørn Lande (ex-Masterplan), Eric Martin (Mr Big) and Bob Catley (Magnum). As well as the regulars, ‘Moonglow’ also brings new vocalists in the form of Hansi Kürsch (Blind Guardian), Mille Petrozza (Kreator) and Candice Night (Blackmore’s Night) all of whom add even more vocal prowess to an already stellar line-up.

Now when it comes to Metal Opera’s there is no one quite in the same league as Tobias Sammet. And any doubts of Sammet not being able to smash another Metal Opera out of the stratosphere (and then some) were dismissed no less than three seconds into the album.

Opening track ‘Ghost In The Moon’ is one of the best tracks Avantasia has ever done. Period. Musically and lyrically it feels like the cousin of ‘Mystery of the Blood Red Rose’. There are the Meatloaf-esq qualities to it that Sammet brings together so well. The piano and soft vocals at the start are just stunning and lead into no less than 9-minutes of pure metal opera bliss. – plus, the vocal melodies throughout are outstanding. It all dies down a bit towards the end of the track into a classical-esq interlude before storming back into action where it left off. What a way to start an album.

Its followed by ‘Book Of Shallows’ which takes a bit of a left turn mid-way through with Mille from Kreator rocking up for a seriously heavy section backed up with chugging guitars. On paper, this probably sounds like chaos and disaster – a power metal thrash blend – but Sammet has somehow composed the transition between the power metal and thrashier sections of the song so seamlessly that it just works to perfection and doesn’t feel one bit out of place.

Next up is the title-track ‘Moonglow’ which marks the only track on the album to feature female vocals alongside Sammet with Candice Night joining the Avantasia party. This song sounds very post-Tarja Turunen era Nightwish influenced – think along the lines of tracks like ‘Amaranth’ or ‘Elan’. Sammet and Night’s voices complement each other extremely well though.

‘The Raven Child’ offers the longest track on the album with some stellar vocal styles showcased across the song. It brings Kürsch and Lande together for what can only be described as an 11-minute epic. It begins with Kürsch’s soothing medieval minstrel tones with strumming harp accompaniment starting the journey– you can see why Sammet enlisted him on this song – which then leads into soaring chorus’ and killer vocal harmonies between the vocalists before Lande’s gravelly rock tones take the reins. Lande absolutely brings it on this track and his vocal abilities absolutely take this song to new heights.

But it’s ‘The Piper At The Gates of Dawn’ that brings the majority of the vocalists together for one big sing-a-long – its got Ronnie Atkins, Jorn Lande, Eric Martin, Bob Catley, Geoff Tate lumped together. Of course, when you bring this many vocalists together for a track inevitably some get lost in the mix but each singer each brings their own qualities to this song.

Michael Kiske features less prominently on this album and it’s not until the penultimate track ‘Requiem For A Dream’ that he’s drafted in for what some may describe as a cliché power metal anthem. If you know your Power Metal, you’ll know that Kiske is basically a God amongst men for most, if not all, power metal singers so an album without him doing what he does best would surely be blasphemy.

Sammet doesn’t do power metal by numbers but if you were hoping he might use Kiske’s vocals in less predictable ways other than the trademark “big power metal anthem” you’ll probably be uninspired by how he’s used in this song. His voice sounds as good as ever though, soaring to the albums highest notes and pushing his gushing protégé Sammet to his vocal limits. The track itself is classic Avantasia power metal – the orchestral intro sounds like it should be part of Holst’s Planet Suite or a Mahler Symphony before the guitars, keyboards and power metal shreddage really gets down to business.

But it doesn’t stop there. This album really is the gift that keeps on giving. It closes with a cover track that you didn’t know you needed in your life until you’ve heard it. They’ve only gone and done ‘Maniac’ from the movie Flashdance, haven’t they!? It features Sammet and Eric Martin trading vocals and the second verse casually throws in some stupidly good palm mute on the guitars. Only Sammet could get away with going off-piste with this and honestly it puts the Firewind cover version to shame. We’re hoping they bring this one out when the Moonglow tour comes to London in April.

Avantasia are one of those bands that you just know the non-metal masses would adore if they heard them. Really, it’s quite tragic they aren’t more widely recognised outside of the metal realm because this stuff should be on Broadway with Sammet as the shining star.

But needless to say, it’s pretty safe for us to shout from the rooftops without ANY shadow of a doubt that with ‘Moonglow’, Tobias Sammet’s self-proclaimed title of ‘the Mozart of our age’ remains as accurate as ever. A glittering metal opera for the ages.

Moonglow is released on the 15th of February 2019 through Nuclear Blast Records.