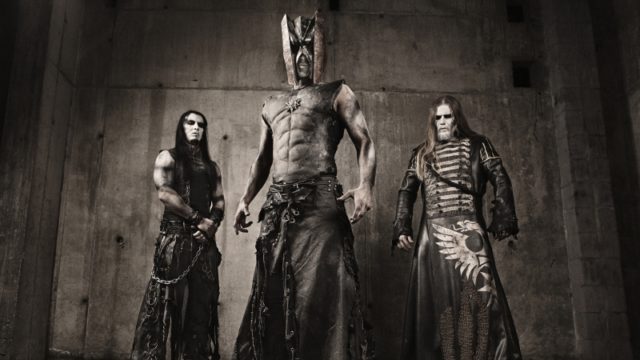 There is one sure fire way to tell if a gig is going to be well attended before the queues starts. Look for the touts. Listen for them. You will find these parasites at only the best selling of events, and tonight their disgusting practice is in full flow. Tickets bought for twenty pounds and resold for one hundred, they deserve a place in Hell. How fortunate then that the world’s premiere band of Satanists should be waiting just a few hundred feet away.

The stage is bathed in a pale orange and dry ice. A chill fills the air as eerie sounds emanate from the synthesisers, and Wolves In The Throne Room [7] begin their set. The wiry and scabrous music has an icy texture to it that fills the audience with a pang of fear, but doesn’t quite fill the room. Their atmospheric and cascading black Metal at first falls foul of poor sound, with an almost entirely absent low end. It’s disheartening that sound problems should befall the band as there is a more than healthy amount of attendees screaming their joy for dear life at their every note. By their penultimate strain of slowly crescendo’ing blackened metal, things seem over all too quickly. Despite the average length of Wolves’ songs hardly being radio friendly, the set is over in a flash. Tremendously accomplished and energetic, but let down by matters beyond their control.

The Birdie Song rings out loud over the PA, much to the audience’s adulation. This combined with a variety of oompah and carnival ditties implies a certain levity for the next set. Things could not be further from the truth. At The Gates [9] arrive on stage with a seriousness and a grandeur of heroism. Understandable given their pedigree as luminaries of the Gothenburg death metal scene, and they are received as such by the barely restrained audience. Opening with the title track of latest album, To Drink From The Night Itself, things kick off at a break neck pace that does not give the audience pause for respite. The spiralling spotlights create a hypnotic effect, enveloping you in Gates’ material fully.

Tomas Lindberg moves around the stage with purpose and almost as a caricature of a rock star; he strikes traditionally rock n roll poses, throws his fist in the air and hurls the microphone stand around the stage. It’s so tongue in cheek, it threatens to burst his face. He is however an inimitable performer and proves himself worthy of his legendary status with an awe inspiring vocal performance as he and the rest of the band smash through fan favourites from Slaughter of the Soul and At War With Reality. A truly epic display from one of heavy music’s finest bands. Any other night, they would have been headlining…

“Living God, I shall not forgive. Jesus Christ, I forgive thee not”. The chilling children’s choir that opens I Loved You At Your Darkest is all that stands between At The Gates’ set and the headline performance. These words rattle through the PA, ever so slightly increasing in volume each time, building fearful anticipation for the grace of the infernal Behemoth [7]. A blackout curtain is draped across the front of the stage, and the unholy triumvirate of Nergal, Orion and Seth are silhouetted against it. The United Kingdom, obscured by an inverted cross, is projected across these silhouettes before the curtain drops to unveil Wolves ov Siberia.

Steam canons arranged in a trinity as well as to shape an inverted cross explode across the stage accentuating the percussion, while sparks fly from the floor behind the hellish trio. It’s an impressive effect initially, but as it is used time and again and to highlight the same beats, this stage production becomes a tad predictable. Song after song rolls by and it feels as if the performance would benefit from either restraint of use or more variety of pyrotechnics.

The band play impeccably through a wonderfully cohesive setlist. I Loved You At Your Darkest was a musical departure from prior album and modern masterpiece, The Satanist, so it’s an informed and apt decision to gear the setlist towards ILYAYD, Evangelion and Demigod. This earlier material goes down a storm with the loyal legions of London, with particular reverie being found in Conquer All and Chant for Ezkaton 2000.

What’s puzzling however is the actual performance of this material. Not musically, but physically. Nergal strides around the stage like a rock God – or Devil – as he should; he is perhaps the most identifiable figure in modern extreme metal. But it’s in this self-assuredness that something is lost. His command of the crowd is laudable, but distinctly Iron Maiden-esque, and his declarations of “Show me thy horns” and “That’s right baby-ah” during God = Dog are undeniably Hetfieldian. This doesn’t work. During Ov Fire and The Void, Nergal and Orion perform a synchronised jump up to the front of stage risers. Twice. There is no way of describing it as anything but feeble. Every movement around the stage feels so carefully rehearsed that the show misses an element of spontaneity, and the feeling that things could implode into hellish disaster at any moment. The show lacks danger. Every jot of the show’s physicality feels as synthetic as the bass drums sound, and the accompanying production leaves a bitter taste that this show is style over substance.

As the band return to the stage for their encore – one that is roundly demanded by the vast majority of the audience – they don more elaborate and demonic costumes. It’s an imposing visage and makes the duo of Lucifer and We Are The Next 1000 Years that much more theatrical, and an appropriate way to close the evening. Sadly, the evening wasn’t the spectacle that the band were hoping for, and lacked the grandiosity that the finale nods to. A disappointing affair, but one that does satisfy a hardcore contingent of the crowd. Not quite as bombastic as it should have been, and far more polished than it deserves to be, it’s not quite a bang, but certainly greater than a whimper.