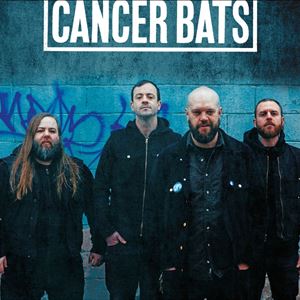 January is generally pretty rubbish all things considered, everyone is on the big Christmas comedown and it  tends to be pretty miserable and boring. Every now and then though something comes along and adds a little light to proceedings and in this case that would be Cancer Bats and chums who are back on these shores for a rather extensive visit, so we decided to get our dancing shoes on and pop along for a good old fashioned mosh party.

Opening tonight’s festivities are Underside (8) all the way from Nepal. They go on not long after doors so suffer from having a smaller crowd than they deserve, but they still manage to do a good job of getting the growing audience going. Coming along like a heavier Ill Nino, they specialise in hard edged but melodic metal, it’s very no frills and it works very well. The band possess a lot of energy and seem thankful to be here, but the real highlight of their set is when they bring out a mascot that can only be described as looking like a ‘Mosh Predator’ it’s a very cool visual and adds something a little bit unique to an already enjoyable performance.

Bleed From Within (7) are up next and frankly don’t do a lot for me. They are a band that has largely passed me by, and tonight is no different. Performance wise there isn’t a great deal to fault about them, as they have clearly honed their craft live,and they throw themselves headlong into their set tonight, igniting savage pits and working up the crowd with ease, but musically they seem to be quite run of the mill and there isn’t really a moment I can pick out as a stand out in their set as all of their songs start to blend into one after while. As mentioned above it’s a bit of a shame that they don’t quite have the songs in their collection to back up the performance.

Cancer Bats (9) Let’s be honest though, tonight was only ever going to belong to one band. No matter how many times I see Cancer Bats live they somehow always manage to be better than the previous time I saw them and tonight is no exception. This is one of those sets that makes you truly appreciate the live music experience. Not only are Cancer Bats operating at the top of their game as they play a blistering set of bangers with the energy and passion of a band playing like this could be their last show, but they also hold the crowd in the palm of their hands.

Furious circle pits, moshing Pandas and a recurring musing on the glory of Coldplay are all present and correct during tonight’s set, chuck in a brief moment of Liam breaking into a faux cockney accent to banter with a fan and you have all the ingredients for a good night. Set wise its a clash of the old and the new with tracks like Gatekeeper and Winterpeg from last year’s surprise album The Spark That Moves rubbing shoulders with old favourites like Lucifer’s Rocking Chair, Hail Destroyer and even a rare outing for Butterscotch, It’s a set tailor made to ignite pits and start parties, two things it accomplishes with ease.

Cancer Bats may never become the biggest band in the world and that’s ok because they can remain safe in the knowledge that when it comes to playing live they will forever remain one of the best, managing to be both tight and raw, but utterly compelling and completely life affirming. Hail Destroyer? no…Hail Cancer Bats!