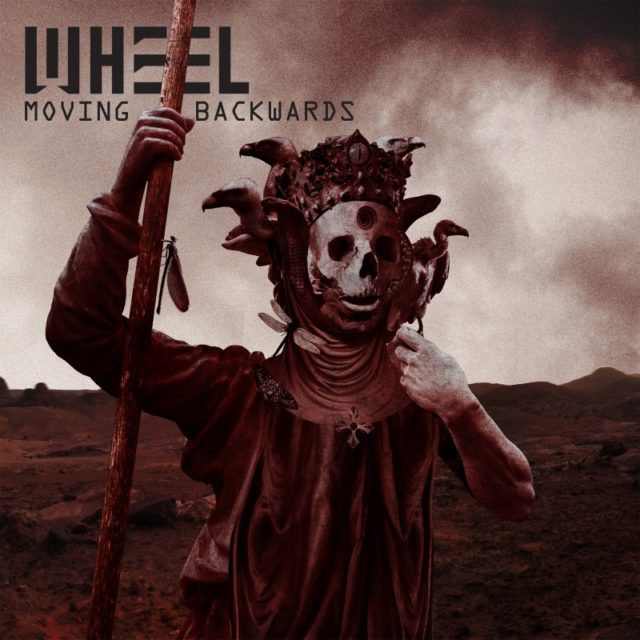 Progressive is a loaded term in music. For some it signals forward thinking, expansive music that experiments in ways barely dreamt of. For others it’s a synonym for beard stroking fretboard onanism in as many time signatures as physically possible. There are many shades of progressive in heavy music, each trying to push boundaries further than the last. The latest contender in the ring is Wheel, a Finnish/English quartet looking to plant their flag in the soil of all things prog with new album Moving Backwards.

From the opening notes of the lively Vultures, it becomes clear that this form of prog metal is not simply self indulgence smashed haphazardly into a collection of songs. There’s a level of craft here that befits a band far older in years than Wheel. The track is a clever mix of off kilter rhythms and intricate instrumentation that smashes away with a mature resolve. It’s an atypically short song for the album, but a perfect aperitif for what’s to come.

The most notable thing on first listen is that Wheel like Tool. A lot. The adoration for one of the greatest bands of all time is understandable, but Wheel walk a dangerous line between adoration and imitation. On Wheel, the vocal and percussive syncopation during the lines “Shut up and give me the medicine” stray a little too close to Ticks and Leeches for comfort. However imitation is the most sincere form of flattery and Wheel do it well. The bass tone and playing style is reminiscent of Justin Chancellor and the guitars have the same emotional depth behind them as that of Adam Jones.

Musically the album doesn’t diverge too far from this Tool worship despite taking influence from Grunge and film scores, but complaining about that is like being irritated by having an orgasm. Longer songs like Tyrant and Lacking find themselves creating epic, sprawling journeys filled with peaks and valleys of dynamic musicality. The album is certainly never boring and even tracks stretching into ten minutes don’t outstay their welcome. It’s vibrant and exciting throughout.

Wheel have done an excellent job with Moving Backwards, creating a dynamic and musically dextrous album full of interesting and exhilarating songs. It does wear its influences on its sleeve perhaps a little too much, and this does act as a slight detriment. Straying too close to imitation removes a sense of invention, however Wheel do imitate the best with adept nous. If this is their Undertow, then there could be great things ahead.

Moving Backwards is released on the 22nd of February 2019 through Odyssey Music Network.