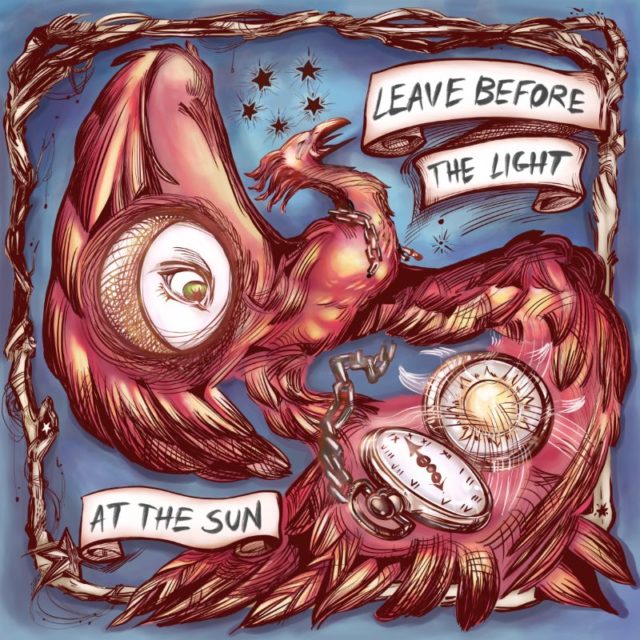 It’s funny how some bands just seem to appear out of nowhere. A year ago, At The Sun were relatively under the radar, but over the course of the last few months their name seems to have been everywhere. You might be tempted to think that the band have now done the hard bit, their name is out there, but the music industry is a cynical beast. Bands and artists with hype behind them are everywhere, bands with hype behind them who can back it up, on the other hand, are extremely rare.

So does this debut album from At The Sun live up to the hype? Or are they yet another band who are better at social media and marketing than they are with guitars? Upon first listen to Leave Before The Light the answer was still unclear, however, after another spin there was no doubt. These guys deserve all of the plaudits currently heading their way. Harry Dale (Vocals) Chet Jogia (Lead guitar) Kieron Heavens (Rhythm guitar) Alex Matthews (Bass) and Craig Steen (Drums) have created a banger.

The massive drum hits which signal the arrival of opener Only A Fool aren’t so much an introduction as a statement of intent. The hard rocking five-piece are underway and don’t look back from that moment forward. On first listen this and second track Preacher seemed a little same-y, but then we discover that the band are so much better when they crank the heavy all the way up. Dale delivers a vintage classic rock style vocal while the guitar solo is absolutely first class.

Breathe is more the same in the best way possible. The band have a great knack of having elements of the great 80’s and 90’s rock bands but without sounding like an imitation or dated, and that really shines through in the early part of this record. Things slow down substantially for the moodier and broodier Walk On Over but there’s no dip in quality. That early Black Sabbath style riff feels like the best massage you’ve ever had as it hits your ears. (Just me? Ok…)
The album was recorded across multiple sessions over the course of a year which is a bit of a bold move, but the overall product doesn’t suffer in the slightest. It wouldn’t have been a surprise if the album would have sounded a little fragmented and uneven as the band obviously evolved over such a long period of time, but it flows together incredibly well. Lay It On Me, Lifetime and Devil In Your Eyes are all very good, and very solid tracks to take us through the middle third of the album. Not every track has to knock you over, sometimes, understated, solid quality is more than enough.

Having said that the band are more than capable hitting you harder than a well-placed Anthony Joshua right hook. The whiskey drenched, swaggering machismo of Bite Your Tongue is everything you could possibly want rock music to be. The main riff is dirtier than last nights kebab, and the track just makes you feel ten feet tall. And that’s all before we get to the last minute or so, when things break down and kick up an extra gear.

Indestructible is probably the only disappointment on the album, it’s ok, nothing more, nothing less. But when your filler tracks are still solid you know you’re doing alright. The Ozzy Osbourne inspired adlibs, “Oh yeah!” (Think Black Sabbath N.I.B) on Renegade will make many a hardened rock veteran smile. The crunching riffs, soaring vocals and thundering guitar solo will then make them head bang like no one is watching. Lead single Soak It Up is another cracking tune and final salvo Raise Your Glass is the only thing in the word with a greater air of defiance than a 17-year-old after two cans of Stella. That’s a really good thing in case you were wondering.

Leave Before The Light is such a good album. That isn’t just hyperbole either. The band sound like Black Stone Cherry if they’d have been locked in a drug den of an after-hours club with 1988 era Guns N Roses. They’ve got those Black Stone Cherry big choruses, but with an Appetite For Destruction kind of rawness. Rock albums of the last decade or so have had a horrible tendency to be over produced and made to sound too polished, but thankfully Leave Before The Light avoids that particular pitfall in fine style.

No matter what style of rock music you’re into there’s something for you on this album. Leave Before The Light is an absolutely wonderful hard rock record. It really is that simple.

Leave Before The Light is released tomorrow, 8th March 2019.